Black and Blue and Gold

Why Opening Day still matters in the Steel City.

Today at 2:20 p.m. EST, a large group of Pittsburghers in the Steel City and around the country is going to feel a secret thrill. They’re going to stop everything they’re doing and note the time. They’ll turn on crackling radios, glistening HDTVs, open up web browsers and cell phones and revel in the moment.

These people are Pittsburgh Pirates fans. I know because I’m one of them.

It’s easy to mock Pirates fans, and lots of people do it, both in and outside of Pittsburgh. Since I’ve moved out of the city, the most common reaction to my trusty weather-beaten Pirates hat is, "They still play baseball in Pittsburgh, huh?" In the city, the reaction is more along the lines of, "Why would you do that to yourself? Are you an idiot? Don’t you know this team can never win?"

It’s true; it hasn’t been easy to be a Pirates fan. I told anyone that asked before last season that the Pirates were going to be bad. That they had a last-place season locked up before a pitch was even thrown. That good days might be ahead—but that they weren’t coming soon. Even so, the Pirates were much worse than I expected last year, with their 105 losses that could’ve easily been more like 110. It was a brutal season; the worst of my lifetime (I was born just before Chuck Tanner’s final year as Pirates manager; a 104-loss disaster that was the worst the club had been since the 1940s). I thought I could handle anything as a Pirates fan, but the stretch that saw the Pirates win just 23 games between June 1 and August 31 last year was the worst thing I’ve ever experienced as a baseball fan.

But, you know what? I’m excited for 2011, and I think that every Pirates fan should be. And not in a Stockholm Syndrome kind of way, either, but in the genuine way that young talent can inspire excitement in any baseball fan anywhere. In 2008 and 2009, the Pirates had a roster that was mostly full of aging players with limited talent facing free agency. In 2010, the Opening Day roster resembled The Isle of Misfit Toys more than anything, with a starting lineup full of other organization’s castoff prospects that the Pirates hoped they could rehabilitate into something more. They couldn’t.

But this 2011 team is different. The offense is lead by four young, talented players in Neil Walker, Andrew McCutchen, Pedro Alvarez and Jose Tabata. Walker will turn 26 in September, and he’s the oldest of the group. McCutchen is the only one of the quartet with a full season of

Major League Baseball under his belt. For the better part of the last decade, the Pirates have talked about rebuilding by flushing the team with young talent. Much of the time, those were empty words, but in 2011 they’re actually doing it, both with the players in Pittsburgh and the minor leaguers getting closer.

I’m not here to lie about what the 2011 Pirates are capable of. They’re almost certainly not a .500 team. And this team isn’t a slam dunk to end that streak in 2012 or 2013, either. Young baseball teams have plenty of moving parts, and there’s plenty that could still go wrong with the four young position players in Pittsburgh (in no particular order there’s Pedro Alvarez’s strikeout problem, Neil Walker’s potentially low on-base percentage, and Jose Tabata’s lack of power to this point in his career). That’s not even mentioning the pitching staff.

While some members of this year’s team (James McDonald and the very talented but much-maligned Charlie Morton) could break out and there are some interesting young arms in the upper levels of the minor league system (Rudy Owens, Bryan Morris, Jeff Locke, and Justin Wilson are all names to watch, if you’re not watching already), but none of the Pirates’ real blue-chip pitching prospects have even thrown a professional pitch in a minor league game. It’s dangerous for a team like the Pirates to have their hitters in place without pitchers to back them up, especially when they’re not even completely sure how good the hitters are.

What the 2011 Pirates are is what they should’ve been all along: A group of mostly young players who are coming together to take a crack at building something over the next few years. And at the very least, they’re worth watching. I don’t think there’s a player in baseball as exciting as Andrew McCutchen. Jose Tabata is much the same; he plays at the same breakneck speed as McCutchen, he idolizes Roberto Clemente and he can spray hits all over the field. Pedro Alvarez hits the baseball as hard and as far as anyone. Neil Walker’s career seemed stalled out in Triple-A 12 months ago, but now he’s starting at second base for the team he grew up watching, turning double plays with Bill Mazeroski and wearing Andy Van Slyke’s number.

No, the Pirates won’t be a .500 team this year. But they’ll be better than they were last year, and if the right dominoes fall into place over the coming season, they could be even better next year. All good things have to start somewhere, and if the Pirates are to dig out of their 18-year hole in the near future, this is where it has to start. Maybe that’s not a lot of hope to hang our hats on, but at least now they’re digging with shovels instead of toothpicks.

New manager Clint Hurdle has been preaching a firebrand message since spring training: Hell or high-water, “We’re going to let the other team know we’re there.” Maybe the city’s prodigal sons, its lost-long baseball fans, will notice that they don’t have to be ashamed anymore. 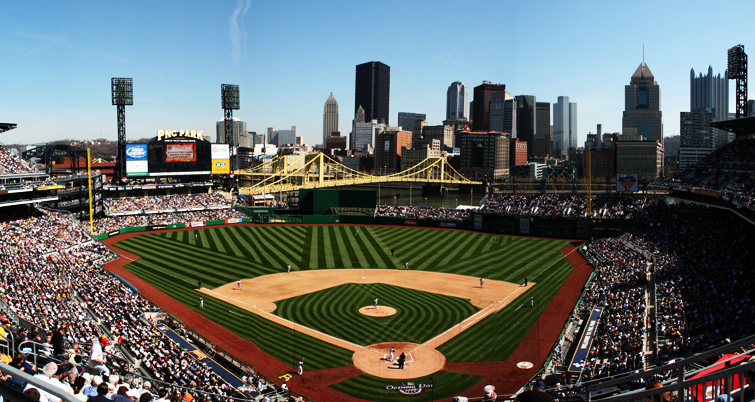