A live report from Adventure Bingo, perhaps the best trivia night in town. 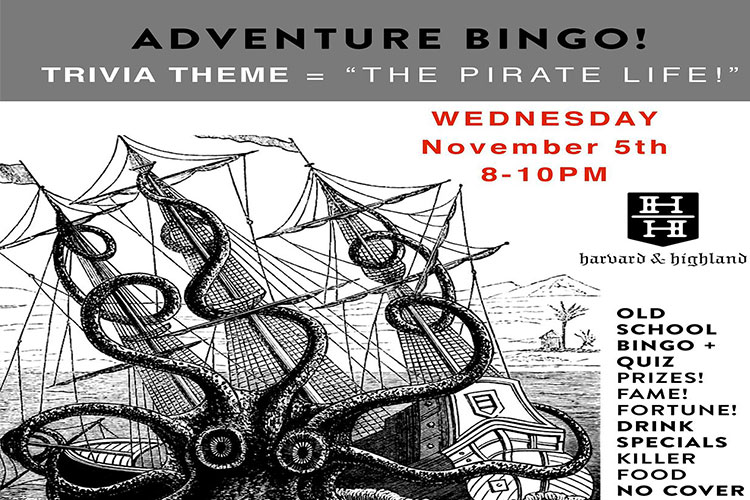 There is a wide gap in quality in the world of bar trivia games.

In their best form, pub quizzes can be entertaining and engaging events. A fine night of trivia can inspire devotion and weekly appearances from well-rounded teams of knowledge junkies, with new gimmicks and tie-ins distinguishing one bar’s events from the next.

They can also be insufferable and ill-managed messes, with far too many competitors packed into a small room for hours on end while a disinterested host asks poorly conceived questions out of an aging almanac.

So it was with trepidation that I approached Harvard & Highland's weekly game night. Adventure Bingo has attracted some buzz and carries the Kevin Sousa imprimatur, but the details available on the game’s website were scant; was this a can’t-miss evening or a routine game of bingo with some quick question breaks?

To spoil it: Adventure Bingo is awesome. And the only thing that prevents me from insisting that everyone attend immediately is my own desire to preserve a seat at the table.

Hosted by the hilarious Alexi Morrissey, a delightful curmudgeon and artist by day, the event ushers competitors into Harvard & Highland’s multipurpose back room. There’s no cover; guests are instructed to grab a standard-issue bingo sheet and dauber and take a seat at a line of tables. Before the game begins, waitstaff will take orders; food from Union Pig & Chicken is available (a word on that later), as are a series of drinks to tie in to the weekly trivia theme.

That’s right: Rather than hurl questions about football, “The Simpsons” and the solar system at you free of pattern, each week of Adventure Bingo revolves around a sample theme. Last night, the theme was “The Pirate Life.” That meant piratical questions ranging from the simple to the obscure, delivered by Morrissey with ample historical background and frequent side-rants about modern life (or, at least, his modern life). It also meant a quintet of $5 drink specials, such as “Saucy Sadie’s Right Hook” (Sailor Jerry Rum, Pineapple and Spiced Rum), “Blackbeard’s Lost Limb” (the Peg Leg Stout from Heavy Seas Beer) and the direct “Walk the Plank!” (a shot of Sailor Jerry and a PBR). Sailor Jerry was, in fact, a sponsor on the night and provided some of the event’s prizes; larger wins garner Harvard & Highland gift certificates.

The game: Morrissey calls out bingo numbers as players frantically try to keep up with six cards, each of which contains one marked square. The frenzy over marking cards is hampered by the number of drinks one has consumed in the evening, but that’s part of the fun; eating finger foods, however, is right out. (Stick to the amazing mac ’n’ cheese.)

If a marked square on your sheet is called — which, in practice, happens for at least one player on nearly every ball — the competitor screams out the word adventure and bingo is paused for a trivia question. Impress Morrissey or score a bingo, and you’ll get a gift certificate; nail an easier question, and you might only win a plastic serving spoon or some other dollar-store swag.

Land the ultra-rare Adventure Bingo — completing a bingo on a ball that also represents a marked square — and a nearly-impossible trivia question will be proffered, with a $75 certificate on the line. There’s no guarantee this ultimate challenge will appear on a given night.

It’s a brilliant twist on the game, it’s not too crowded or clique-y and Morrissey’s perfection in the hosting gig can’t be overstated. Start making it a priority to get here on any Wednesday night you’re able so that Adventure Bingo becomes a cultural institution; if you’re particularly dedicated, you can keep an eye on adventurebingo.net to brush up on the next theme in advance. (Next week’s is Kung-Fu.) Go. Keep going.

Just make sure you remember who told you about it, and save a seat for me.