At the beginning of an election year, Rick Sebak flashes back to an incline ride with former President Bill Clinton and former British Prime Minister John Major. 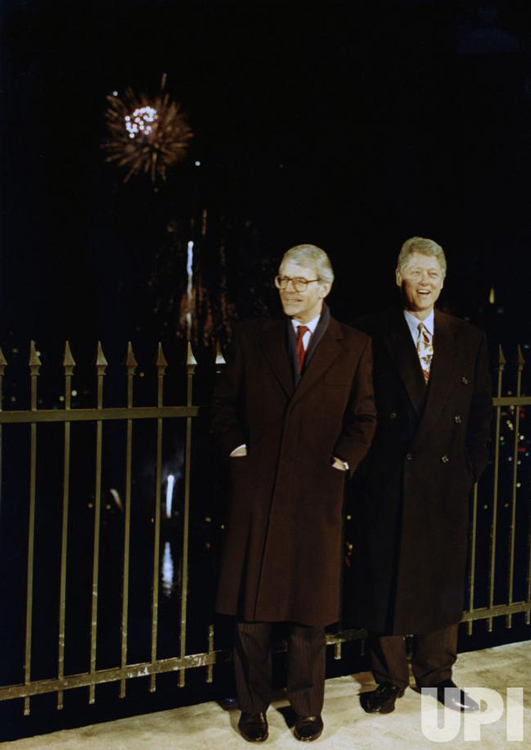 Bill Clinton, the 42nd President of the United States, has been to Pittsburgh many times. Over the years, he’s come to campaign for himself, for his wife, for Barack Obama and even for Gov. Tom Wolf. He taped his first nationally televised town meeting, called “America Speaks,” in June 1992 at the WQED studios. He stopped here in 2012 to speak at the One Young World Summit; in August 2014, he was an unlikely but friendly eulogizer at a memorial service in the Laurel Highlands for Richard Mellon Scaife.

During his presidency, Clinton’s most unusual visit was on Feb. 28, 1994, when he flew into town for a somewhat informal get-together with John Major, then the Prime Minister of Great Britain. Due to differences at that time over Bosnia and Northern Ireland, Anglo-American relations had been a bit cool — but at the G7 Conference in Tokyo the previous summer, Clinton learned Major’s father and grandfather both had lived in Pittsburgh in the late 19th century. So the president proposed a casual summit of sorts here to try and warm up relations between the men and their countries.

The Major family history is complicated. Major’s grandfather was a bricklayer named Abraham Ball who emigrated to Pittsburgh with his wife in the 1860s. He helped to build blast furnaces for Carnegie Steel. The couple returned to England in 1879 for the birth of their son Thomas. Eventually the Ball family returned to the Steel City, where the teenage Thomas joined a circus troupe, performing in a trapeze act called “Drum and Major” with a woman named Kitty Grant (who became “Miss Drum”). Thomas added the name “Major” to his own and became Thomas Major-Ball. He returned to England and had three children, the youngest of whom was John, born in 1943. Although the family name had become Major-Ball, the young politician was known simply as John Major and became prime minister after Margaret Thatcher resigned in 1990.

When he flew into Pittsburgh that last day of February, there was a brief reception in an airplane hanger at the 911th Air Wing of the U.S. Air Force Reserve in Moon Township. The two leaders then rode into town to do some sightseeing and shopping — at a sports apparel shop in Station Square, where Clinton got a Steelers baseball cap and Major bought a Mighty Ducks hockey jersey for his son. Newspaper reports say they paused in the Gandy Dancer saloon, had a good look at the old steel mill ladle on display in the courtyard and watched fireworks from the banks of the Mon. Then the two leaders rode the Duquesne Incline up to the neighborhood of Duquesne Heights on Mount Washington.

Visiting reporters tried to describe succinctly what an incline ride was. They failed. The Washington Post got a bit confused and said the two men rode “a train to the top of the Duquesne Incline.” The Associated Press said the two took “a tram to the top of a hillside.” And the Philadelphia Inquirer reported “Clinton and Major glided up a bluff on a tram.” Our inclines are “funiculars” more than trams, but they’re obviously hard to describe in a few words.

The president and the prime minister had dinner on Grandview Avenue at the Tin Angel restaurant (which closed its doors in the summer of 2015.) Members of the press weren’t allowed in, but they later discovered that the men drank Iron City Beer and ordered off the menu. Major had seafood; Clinton had a beef filet.

They didn’t spend the night here. They took a limousine back to the airport, boarded Air Force One and flew to Washington, D.C., where Major accepted a very rare invitation to stay at the White House. He reportedly slept in the Lincoln bedroom. Not bad for the son of a Pittsburgh trapeze artist.

This article appears in the January 2016 issue of Pittsburgh Magazine.
Categories: Rick Sebak