In her quest to become a more refined 'Burgher, PittGirl cuts the cheese. 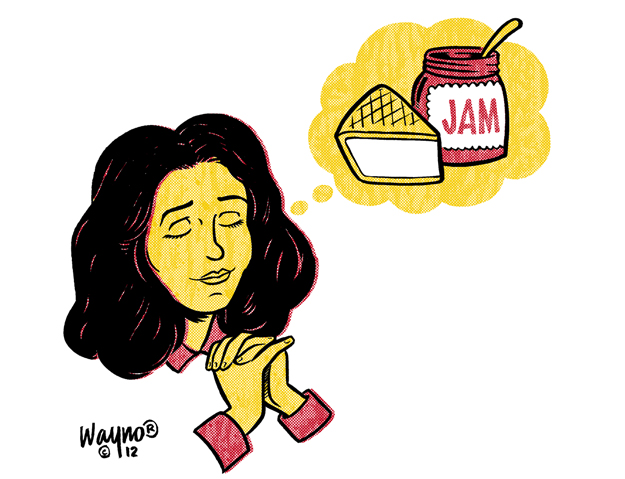 I’ve been writing about Pittsburgh for years. I’ve explored and experienced. Enjoyed (Franktuary) and survived (Just Ducky Tour baby-driving hell). I’ve immersed myself and quenched my thirst on the waters that surround me.

Despite that—I can’t believe I’m about to admit this— until very recently, I had never visited Pennsylvania Macaroni Co. in the Strip District. A Pittsburgh institution. I feel like you want to revoke my ’Burgher card.

At a recent charity event, I found myself standing at a buffet with my plate in hand, staring down at a large wooden board covered with chunks of various cheeses in a multitude of yellow and white hues. I recognized Brie because it’s a triangle … and I don’t believe there are any other triangular cheeses.

Right now, you want to revoke my Refined ’Burgher card and replace it with a Clueless Yinzer card, don’t you?

I grabbed some Brie along with a yellow cheese that I hoped was mild cheddar and another white cheese that I knew wasn’t Swiss (because Swiss cheese always has holes for the mice to hide in). Right now, you want all my ’Burgh cards, don’t you?

These mystery cheeses were sitting next to two bowls of jam. I stared down at the red and purple glistening blobs and wondered where the peanut butter was. Unable to find anything on the table that made sense to pair with the jellies, I skipped over them and threw a half-dozen cookies on my plate, and walked over to a table to eat with other guests.

Two of those guests, Jennifer England—a local communications specialist and self-described “foodie”—and Dok Harris—former mayoral candidate—had their plates piled high with cheese, and resting on those slabs of cheese were smears of purple-red jelly.

I couldn’t remain silent. “You put jam on your cheese?”

“Cheese and jam go together. Haven’t you ever had a grilled cheese and jelly sandwich?” Jennifer asked.

I looked at her like she asked me if I’d ever had a grilled monkey liver and pig ear sandwich. I was horrified. Grilled cheese … with jelly on it?! I considered the jelly-cheese combination to be as foreign as pouring melted Velveeta on top of an ice cream sundae. It isn’t done unless you’re a contestant on “Fear Factor.”

What followed was a lesson about cheese and jelly pairings. I learned about grilled sharp cheddar-pear jam sourdough sandwiches. Dok urged me to I taste jam on Brie. I died, went to heaven and asked St. Peter if they had any jam on Brie because, if not, I was busting outta that joint.

A few days later, Jennifer delivered a few jars of her homemade tomato jelly and plum-rum jam, and I knew I was going to need real cheese. I planned a trip to Penn Mac and dragged my husband along so that when it came time to order and the pronunciation was horribly botched, he could use the valid excuse that English is his second language—whereas my excuse would be, “I have no class, and I don’t know anything about cheese. Also, wine comes in two flavors: red and white.”

As a regular ’Burgh girl who generally has ignored the fancy cheese aisle at the Iggle, I considered cheese to come in about 10 varieties: Colby jack, pepper jack, muenster, Swiss, American, Mozzarella, provolone (for fancy times) and various degrees of cheddar. At Penn Mac, I was faced with a towering menu filled with hundreds of foreign cheeses that sounded like snotty royal surnames from tiny European countries: Piave. Padana Grana. Malvarossa. Istara. Naked Goat. … OK, maybe not the last one.

Lost, I went with what Jennifer recommended: piave, Brie and goat cheese. I also ordered some easy-to-pronounce cheese from England. I took it home to share with my extended family at a party I was hosting the next day. I placed the blocks of cheese on a serving tray alongside the jams and ordered my skeptical parents, aunt and others to sample the various pairings. They devoured them, went to visit St. Peter, came back and asked the names of the cheeses—and after a bit, proceeded to talk all fancy-like. English accents were broken out. Spots of tea were requested. Legs were crossed at the ankles. Napkins adorned laps. Gov’nah’s were addressed.

Then we almost came to blows about whether or not you’re supposed to eat the wax that coats the Brie.

Jennifer, Dok and the connoisseurs at Penn Mac have opened my eyes to a whole new world of cheese. Forget the hunks of Colby and the plastic-like slices of tasteless, processed American cheese that previously littered my refrigerator. I’m getting my cheese at Penn Mac from now on, and I don’t care how ridiculous I sound when I ask for Cabe’ cou Perigold.

This article appears in the February 2012 issue of Pittsburgh Magazine.
Categories: From the Magazine, Hot Reads, PittGirl