Between a Cliff and a Hard Place in Pittsburgh

Jeanne McNutt is working to transform Uptown from a highway to a neighborhood. 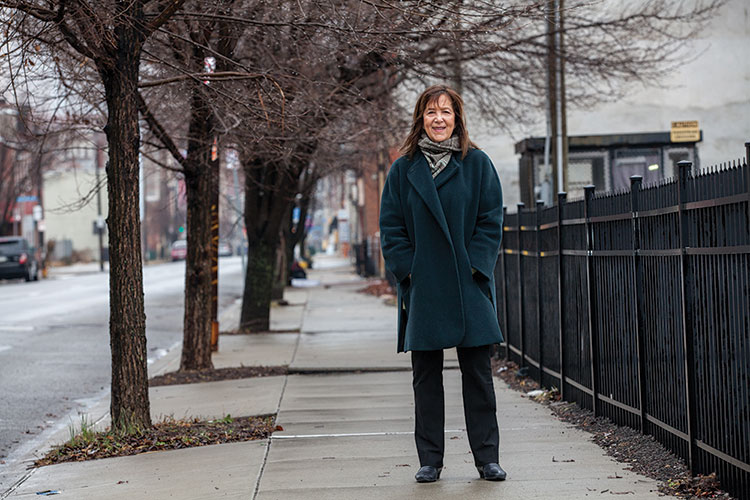 When the Consol Energy Center broke ground in 2008, Uptown was ripe with anticipation. The new home of the Penguins was expected to jumpstart the long-struggling neighborhood. “With the arena, we thought everything would fall into place,” says Jeanne McNutt, executive director of Uptown Partners of Pittsburgh, a nonprofit community development group. “But it was not as catalytic as expected.”

The arena — now bearing the PPG Paints name — attracts crowds for a few hours but not the population needed to build a community in Uptown, a narrow band tucked between the Hill District and the Monongahela River. Uptown once boasted an economically and racially diverse population but suffered from white flight, disinvestment and job losses, starting in the 1960s.

McNutt moved to the neighborhood in 2007 with her husband Dale, a graphic designer and founder of the StartUptown coworking space. Although her background was in the arts — she graduated with a fine arts degree from Carnegie Mellon University — she was disturbed by the lack of a neighborhood vision.

In 2007, she worked with the city to co-found Uptown Partners, recruiting neighbors and business owners to serve on her board. Two years later, the group created a vision plan for the neighborhood that emphasized collaboration between the community, developers, nonprofits and city agencies.

It’s working. Unlike some rapidly evolving neighborhoods, Uptown has attracted mixed-income housing options. In 2012, Fifth Avenue High School was converted to 94 high-end apartments; those were followed by 94 units of affordable housing by Action Housing at the Uptown Lofts and Mackey Lofts as well as housing for students at the Union on Fifth Avenue. Meanwhile, Grow Pittsburgh helped to launch and build the Martin Luther King Community Garden nearby. The projects are helping to provide a base on which the neighborhood can build. “We have barely any retail that is serviceable for residents,” McNutt says. “But retail follows rooftops — when we get more people living here, retail will follow.”

Planning has kicked into high gear. City and Port Authority officials are planning a projected $200 million Bus Rapid Transit system to run from downtown through Uptown to Oakland, to shift motorists to transit, walking and bicycling. The BRT system played a role in the neighborhood’s 2014 selection by the EcoDistricts, a national planning nonprofit, as one of eight national EcoInnovation Districts.

“This is really a large scale project,” says Justin Miller, a senior city planner and project manager for the EcoInnovation District. “It is really ambitious in trying to see how we preserve and strengthen the existing community, and how we can encourage balanced and equitable and green development as it grows.”

To wit, in September, City Council approved a $61 million plan from NRG Energy to bring a small gas-powered energy-efficient plant to the neighborhood to provide heating and cooling to UPMC Mercy and eventually the larger community.

Uptown Partners, meanwhile, hopes to grow its staff so it can continue to stoke development while helping neighbors. “[We want] to focus on legacy residents to make sure their needs are met as we grow,” McNutt says. “We’re happy to be a mixed-income neighborhood and want to keep our eye on that.”

This article appears in the February 2017 issue of Pittsburgh Magazine.
Categories: Community Feature