Amid a wave of competition, Pittsburgh ax-throwing pioneers LumberjAxes expands and refines its game. 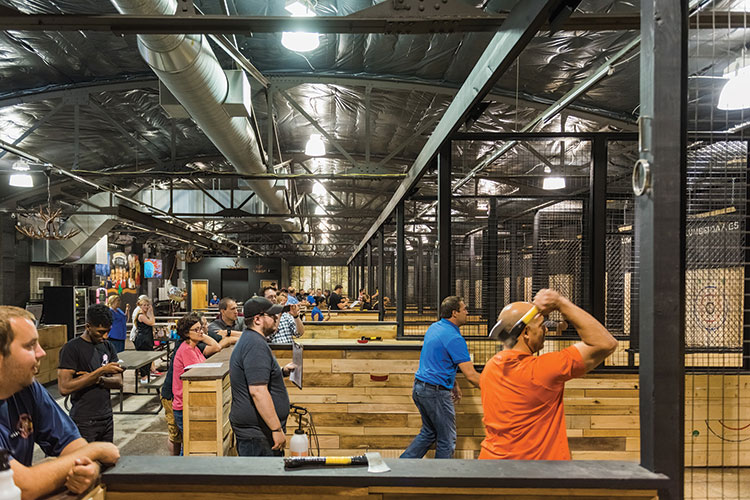 It’s a bold claim, considering the longtime dominance of The Dude’s favorite pastime among anyone-can-play sports. But you can make a solid argument that competitive axe-throwing, the nascent game that has exploded in popularity over the past few years, is a superior activity for a group outing: It’s easier to learn, more dramatic and it requires less machinery and maintenance.

Plus — and this can’t be understated — you get to throw axes.

LumberjAxes (axethrowingpgh.com) opened the first Pittsburgh-area spot for competitive axe throwing in early 2017. In its second full year of operation, the company has been busy. The original location in Millvale has been remodeled; a branch in the South Hills, near the Dormont Pool, is now open; and a mobile game, with a pair of lanes mounted on the back of a truck, is making private and public appearances at outdoor events. (A third LumberjAxes location is also open in Arizona.)

Those who have previously visited the Millvale location will notice refinements in and around the game, including improved axes (lighter and sharper, for better flying and a greater likelihood of sticking in the target) and wooden enclosures around the throwing lanes. The team has also added more decor elements, introduced merchandise and — once again improving the bowling model — added black lights for a neon-hued “cosmic” experience.

The South Hills location, while smaller than the flagship, offers the same experience: A trainer will show you the ropes and keep score while you and your group compete to out-chuck one another. The second location is also more suited for corporate or office outings (a conference room and catering are available), which founding partner Jack Welsh says has become a key part of LumberjAxes’ business — but visitors are finding plenty of reasons to book lanes.

“We’ve done any event you can think to celebrate.”

The success has inspired imitators, with at least five additional axe-throwing locations popping up around town, with some lanes being added to other recreational activities (in a few places, escape rooms and axe throwing have become unlikely bedfellows). Welsh says the competition hasn’t had an impact, though. “I feel like, in Pittsburgh, when people think of axe throwing, LumberjAxes pops into their heads.”

So: Better than bowling? The structure is essentially the same, after all: Take turns standing in a lane and hurling something at a target. The difference is in the ease of picking up the sport. Throwing a bowling ball is beset with variables; those pins are awfully far away, after all. With axe throwing, however, as long as you follow your instructor’s guidance — a step forward here, a follow-through there — you’ll be sinking axes into the board in no time.

And then you can get down to the real matter at hand: Showing up your friends.