Before Photos by Margittai architects | after photos by Gene Yuger, breanna kristian photography and the Century inn

Owner Megin Harrington and her eldest son had just finished a glass of wine in the Century Inn’s historic tavern, and Harrington had returned to her office, when the black smoke began to roll in.

Firefighters from 28 departments battled the blaze — ignited by a malfunctioning exhaust fan — for hours that night in August 2015. When it was finally extinguished, the Harringtons took stock. They’d managed to save their Whiskey Rebellion flag, the only one known to exist from the 1790s uprising, but all of their furniture and belongings perished.

The inn’s stone exterior, mined from a local quarry on the property in the 1780s, still stood, but the wood framing was charred and collapsed. The brass bar, where mother and son had left their wine goblets, was now painted with a smokey patina, save two perfect circles where the glasses once rested.

That bar top is just one showpiece in a two-year restoration by Margittai Architects that judges crowned the 2019 Best Home Renovation winner.

“I love what they did,” says architect Crystal Knapik, a project designer at Vocon in Cleveland. “Seeing the before and afters of this boarded up old building — they brought it back to life.”

Historic renovations are already a delicate undertaking for architects, who strive to maintain historic integrity while adding unique touches, but the Century Inn in Washington County proved a special case. Not only was the fire damage catastrophic, but the redesign had to be accurate enough to qualify for the Federal Historic Tax Credit program and maintain the inn’s listing on the National Register of Historic Places.

“Honestly,” Peter Margittai says, “the renovation was a little bit of a stretch for us as a firm.”

But Harrington knew on the day she met Margittai, a former president of Preservation Pittsburgh, that his company was the right choice.

“We liked the way Peter’s head worked,” Harrington says. “And we liked his appreciation of history.”

Perhaps most importantly, he seemed to understand that, for Harrington and the surrounding Scenery Hill community, the fire hadn’t just destroyed a building, it had pilfered a piece of their identity.

The Hill family constructed the inn in what was then known as Hillsborough between 1788 and 1794 — when families forged west along dusty trails and inns served as rest stops for the travelers and their exhausted oxen that couldn’t pull wagons more than a dozen miles a day.

Harrington’s in-laws purchased the inn in 1945, and she raised her three boys on its third floor after her husband, an attorney, died in a plane crash in the 1980s.

At the time of the fire, Harrington, her son and her daughter-in-law all worked at the lodgings — the oldest, continuously operating inn on the National Road — providing a place for many of the area’s weddings, baptisms and birthdays to be celebrated. As they fought the blaze, several firefighters brushed away tears, according to Harrington.

“It’s unusual to find a project where the work is so meaningful to the client and to the community, and the client is wonderful to work with,” Margittai says. “It was the perfect situation.” 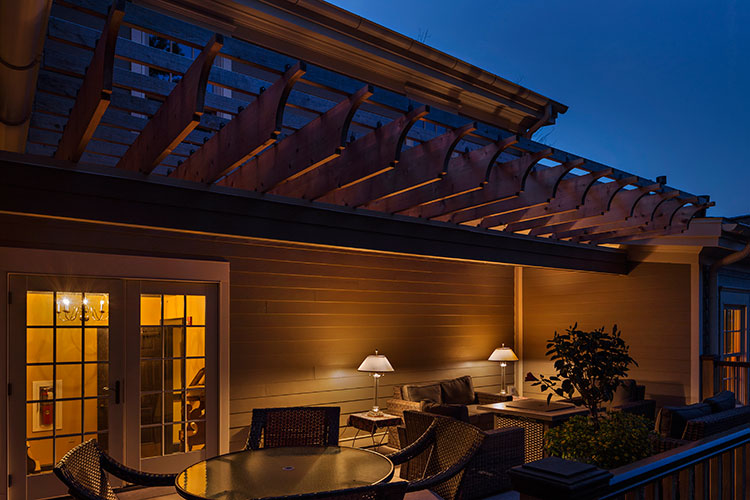 Architect Rob Zoelle took the lead on the day-to-day activities, working closely with the Harringtons to modernize the layout and upgrade the safety features while restoring or re-creating the inn’s most iconic elements. The second-floor guest rooms got a complete, and luxurious, makeover, including open-air balconies that capitalize on the views and gleaming bathrooms adorned with soaking tubs.

The first floor was a far more intricate endeavor, which required Zoelle to create 25 site-specific solutions on the fly, including shoring up the concrete around a natural spring in the basement, saving the tavern’s now-blackened ceiling beams and re-creating three miles of millwork.

“It’s a challenge to restore a historic building because so many of the pieces aren’t square or straight,” Zoelle says. “We’d come up with a solution and, the next week, we’d have a new set of issues we created based on the last set of decisions. It was a puzzle, and all of the pieces needed to fit together.”

But, by February 2018, the puzzle was complete and the Century Inn reopened. Harrington painstakingly re-created the destroyed decor, using rich paints and wallpapers and furnishing the rooms with their finds from estate and yard sales. 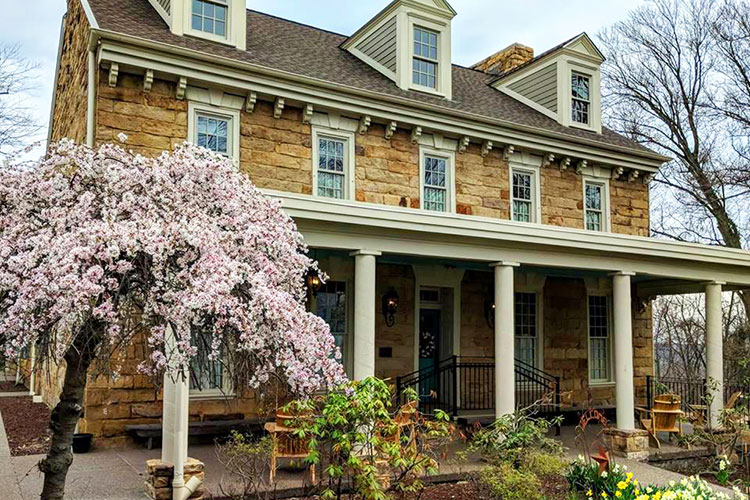 “I couldn’t be more pleased,” Harrington says. “It feels the same, but with a freshness. It still has so much character.”

Some nights, when she’s alone, Harrington sits down next to a stone stoop, which connects the section of the inn built in 1788 to the section completed in 1794, and places her hand in its sagging center, worn down by the footsteps of all who visited the inn over its 230 years of existence, including presidents Andrew Jackson and James Polk, Revolutionary War hero Marquis de Lafayette and Whiskey Rebellion leader David Bradford.

But it’s the early travelers she thinks of most, the ordinary people who took a chance and changed the nation, “loading all of their goods into a Conestoga wagon, looking for a better life.”