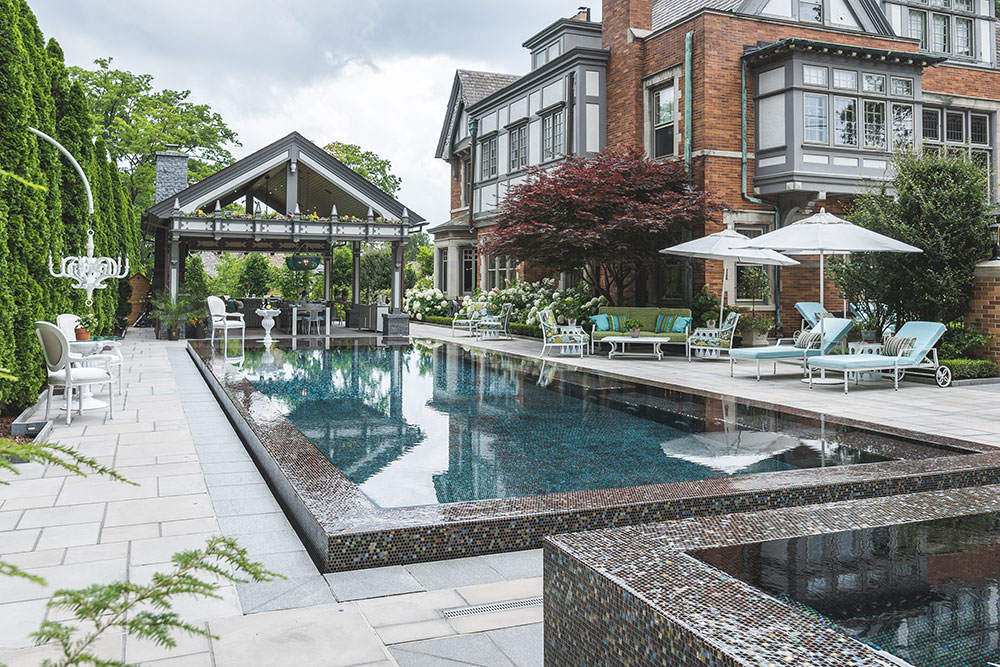 In honor of his 50th birthday, Pittsburgh attorney Scott Westwood was set to take his family to Europe for an epic celebration.

The trip didn’t happen, but his relatives aren’t complaining. Because instead of a vacation, Westwood invested in a magnificent outdoor space featuring a metallic-tile encrusted infinity pool and a whimsical loggia that’s high on drama and luxury — and also comfort.

Calling it fresh and vibrant, with a playful mix of colors and textures, our judges named it their Best Outdoor Space in the 2020 Best of Design contest.

“With just enough traditional detailing and some very unique furniture selections, I think this space is a definite winner,” says judge Crystal DeCastro Knapik, a project designer with Vocon in Cleveland. “I love how every texture and pattern in the entire yard seems so thoughtfully curated to create harmony between traditional and more contemporary features.” 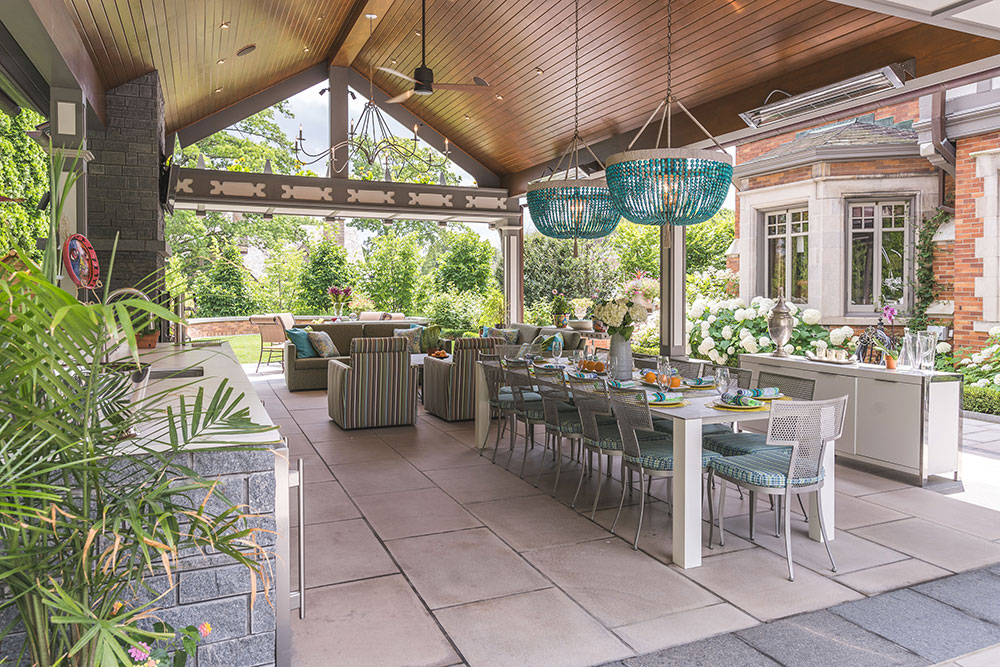 Westwood’s early-20th century, Tudor-style manse in Squirrel Hill comes with an interesting pedigree. Once owned by Columbia Gas & Electric founder George Crawford, it was the early childhood home of heiress Sunny von Bulow, a New York socialite who spent 28 years in a coma and whose life was immortalized in the 1990 film “Reversal of Fortune.”

As one might expect from such a grand estate, the house is filled with marble hallways, high ceilings and Gilded Age architectural details. The outside, however, did not match the opulent inside.

“The one thing about these houses built in the turn-of-the-last-century is it was when air quality wasn’t the best,” Westwood says, adding that most people stayed inside. “They’re all fabulous inside, but they had no outside living spaces at all.”

“He and I started to think about how we could create a space,” he says. “What we did is bring L.A. and Beverly Hills to Pittsburgh.”

Playing a large role in Westwood’s design aesthetics is the fact that he is colorblind and can only see bright hues, a fact that hasn’t stopped him from becoming an avid collector of art and antiques.

Westwood took a similar approach to his pool, which he hoped would be a work of art in itself. At first he desired a bright orange pool (neon being a shade he could see). Tisherman, however, strongly disagreed. Eventually, a glittering ruby hue was chosen.

“(Tisherman) showed up with my mom to have an intervention to swing me off of the orange,” Westwood recalls. 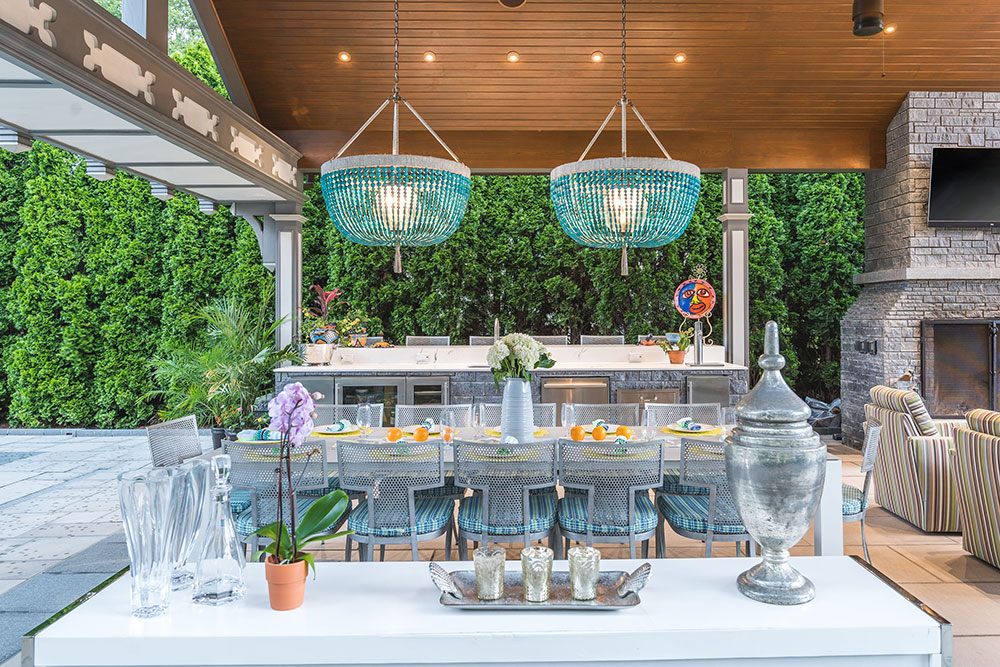 Westwood also brought in Betsy Wentz, owner of Sewickley-based Studio B Interior Design, to help him with design — and temper the color choices. As Westwood describes it, Wentz — known for her playful use of colors — decreed that sometimes you just have to put on the khaki pants.

“Betsy was always trying to ground something with the khaki pants,” Westwood says. “I would go with colors left and right.”

Pittsburgh-based landscape architect Joel Le Gall designed the outdoor space, hand-drawing the loggia with pen and paper. He says the biggest challenge of the project — and also the most satisfying — was fitting the pool, which has infinity edges on all sides, onto a relatively small side yard. He also had to incorporate the pavilion, stone patio, outdoor kitchen, spa and changing room, plus a landscaped terrace, onto the 155-foot-long by 40-foot-wide yard.

“That was the challenge,” Le Gall says. “My job there was to lay this out in a manner which was the most efficient possible.”

The patio and walkways were built using a combination of Grey Porphyry stone brought in from California and Cumberland Grey/Blue stone imported from the Himalayas. The wrought iron fence was made in Pittsburgh by Rob Weaver at Weaver Custom Iron and the decorative Fleurs de Lys were gilded by Joseph Youss Kadri of Gilding Atelier. To create privacy on the formerly sloping lawn, dozens of arborvitae trees were brought in from the center of the state by trailer and planted along the property’s edge.

“I cleaned a nursery out of those trees,” Le Gall says with a chuckle. “You should have seen the trailers.” 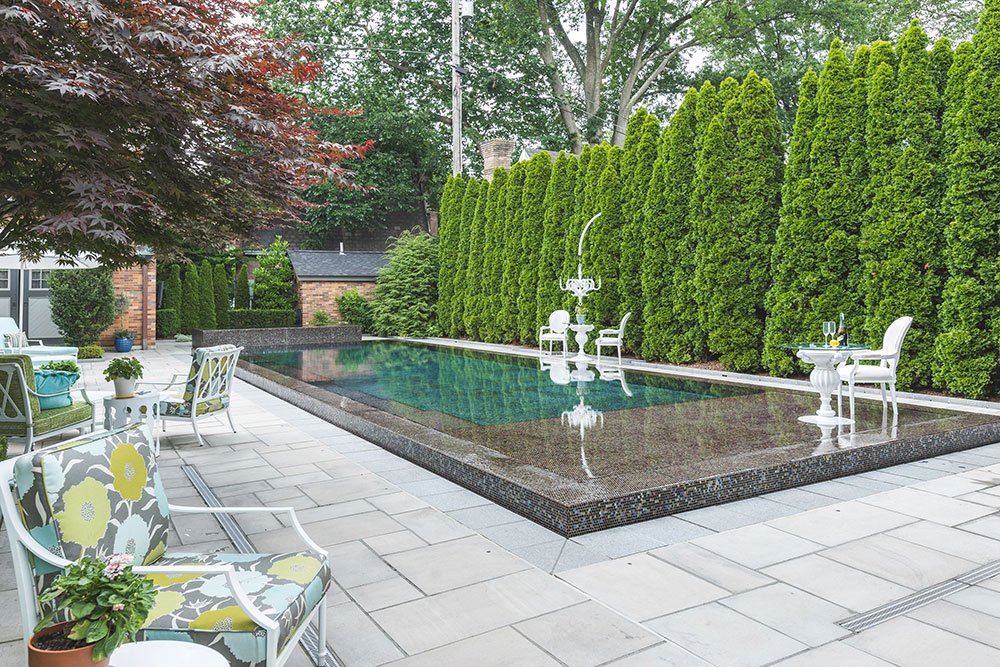 Taking center stage in the pavilion, which was designed with intricate details to match the Tudor-style home, is a pair of dramatic turquoise beaded chandeliers, which Wentz searched high and low for.

“It was important that we get that right and nail it,” Wentz says. “I do think it sets the tone for the space.”

There’s also a kitchen and fireplace, plus a long, custom-built dining table. Satisfying Westwood’s love for color, Wentz incorporated vibrant blues and greens throughout and added fun prints to the comfortable outdoor furniture.

Inspired by his stay at the Delano Hotel in South Beach, Miami, Westwood also requested a dreamy white chandelier, which peeks out of the wall of arborvitaes, giving the whole space an eclectic, Alice-in-Wonderland vibe.

“I had to convince a lot of my team members that’s what I wanted to do. Then I just went and did it,” Westwood says. “Then everyone said it was the right call.”

Because of the design challenge and space constraints — not to mention Pittsburgh winters — the entire project, which started in 2016, took four years to complete. It was worth it though, according to Westwood. The spot is a favorite with family, including his girlfriend and three young adult sons, friends and neighbors.

“Deep down, I’ve always wanted to have a pool,” he says. “We live out there now. How could you not? It’s just a great way to enjoy the outdoors.”