Sophisticated and private, a walled urban garden on the South Side contains all the recreational features you’d typically only find in the suburbs. 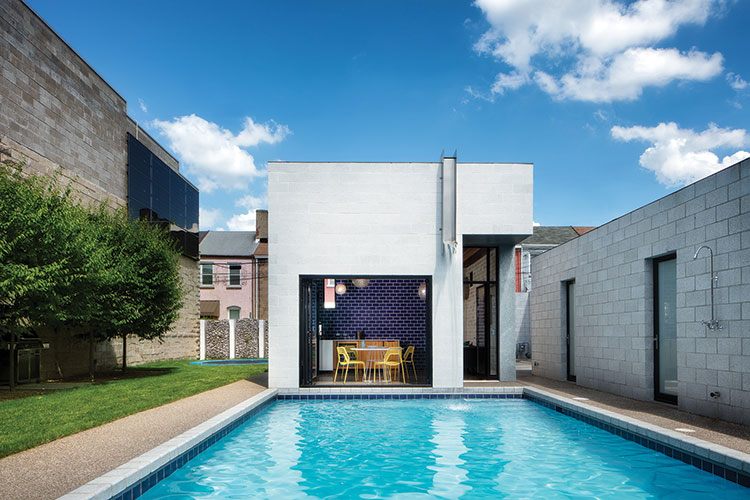 The Best Outdoor Space winner for 2019 should be a familiar one to longtime Pittsburgh Magazine readers.

A former turn-of-the century tin shop and warehouse, the building — redesigned into a “urban courtyard” house by Pittsburgh-based studio d’ARC architects — was named the magazine’s Home of the Year in 2010.

Nearly a decade later, the owners, who wish to remain anonymous, reached out to studio d’ARC for a second request, this time to design the outdoor space of their dreams. 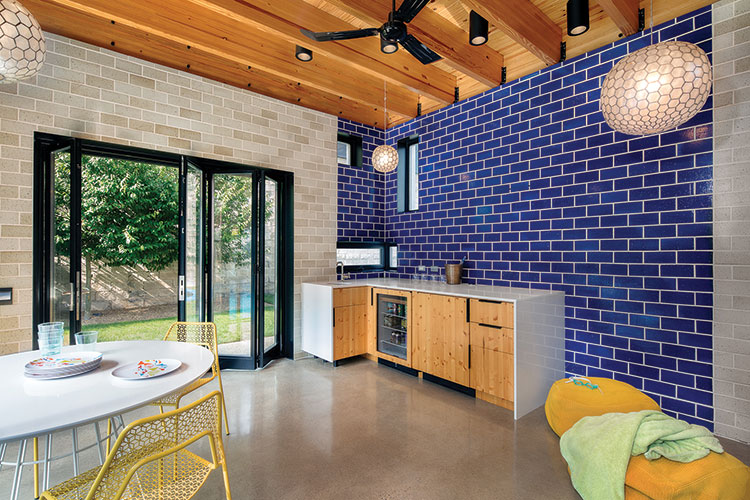 “It was nice to revisit that project again,” says architect Gerard Damiani AIA, founder and president of studio d’ARC.

Judges in the Best of Design contest loved the resulting outdoor haven, which features innovative details such as a sliding steel gate and a cube-like pool pavilion with moveable glass walls. 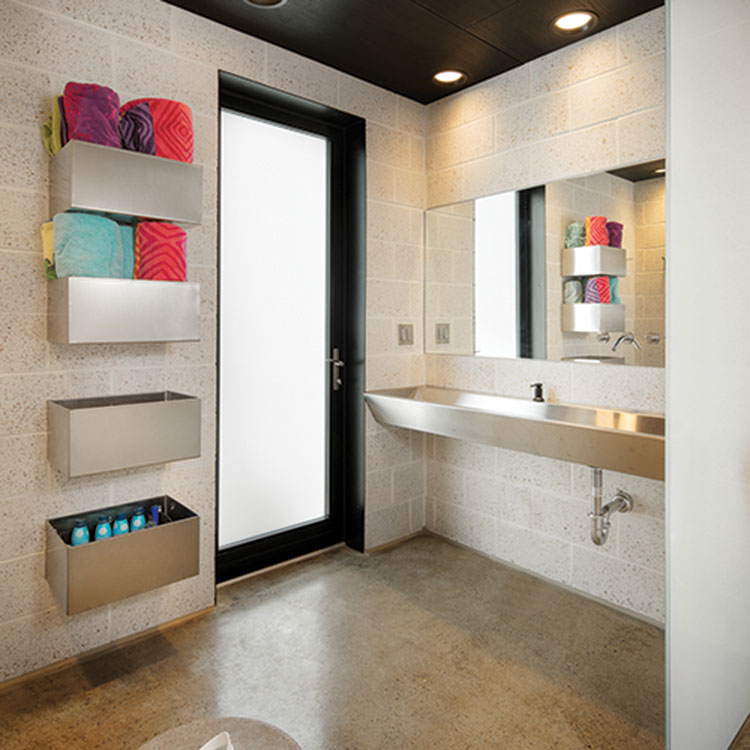 Damiani says the family, which includes two daughters, wished to create an entertainment space that had traditionally suburban features, such as a pool and a basketball court, but was done in an urban way.

Because space is at a premium on the South Side, getting there took some time. Over the last decade, Damiani says the family purchased two adjacent properties and then demolished the structurally deficient homes located on them.

“The properties next to them were in pretty poor shape,” he says. “We were able to join them up with the main house and create a much larger parcel.” 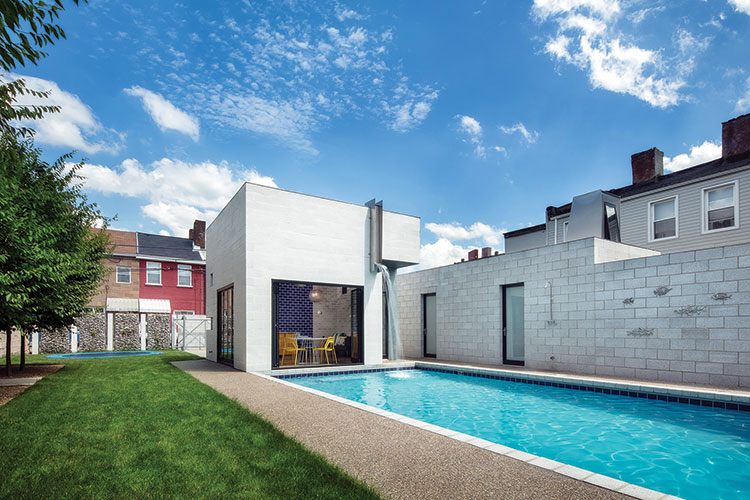 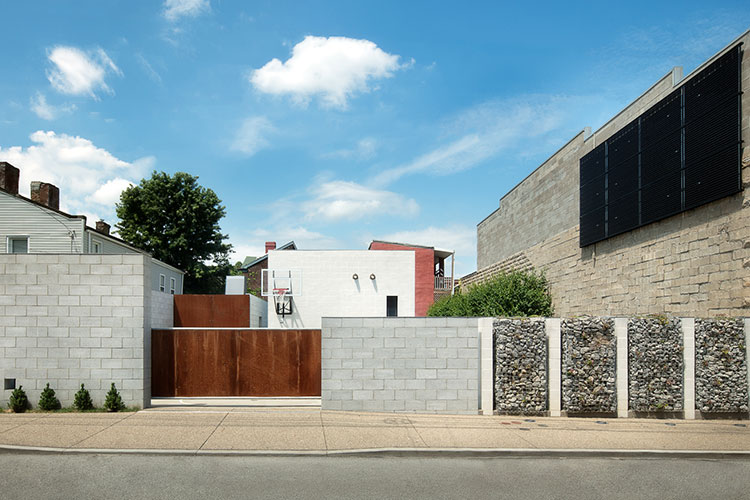 To add more greenery, the existing concrete warehouse wall of the home — which also contains a weathered steel entry vestibule leading to the main residence — was lined with a series of Hornbeam trees that act as shade for the in-ground pool. Another wall, dotted with fish sculptures created by an Ohio-based artisan Don Drumm, contains a separate changing room.

Damiani adds that as the Hornbeams mature, they’ll be shaped into one giant, long rectangle, similar to the manicured trees found in a formal English or French garden.
“You have to make the desired space romantic and kind of beautiful,” he says. 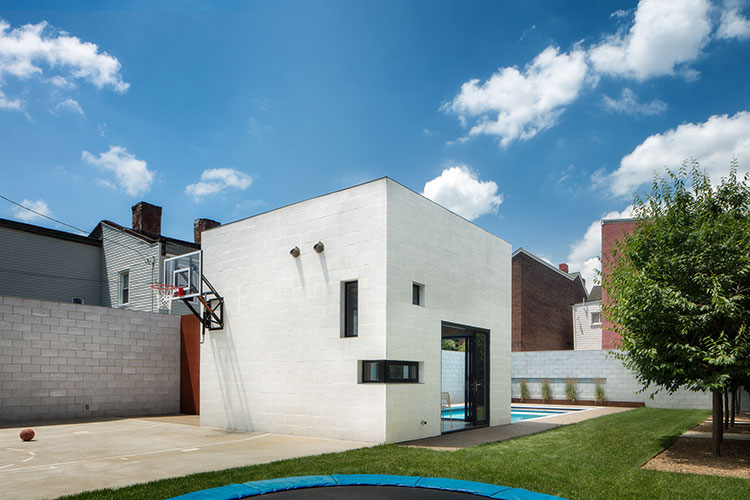 As such, the yard’s trampoline, typically no thing of beauty, was built into the ground as a way to make it less obtrusive, and to prevent a possible tripping hazard. There’s also a basketball half-court and enough lawn space to play a cornhole tournament. 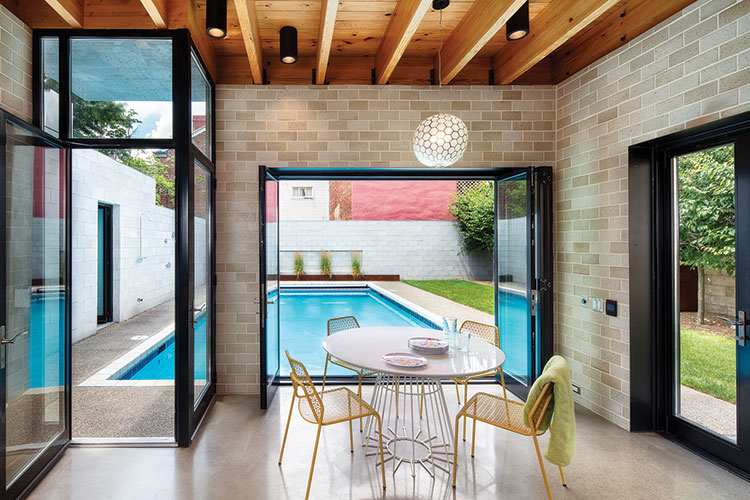 The clean and modern pool pavilion, which serves the dual purpose of visually blocking the courtyard from the street, contains a seating area with contemporary lighting as well as a bar lined with striking blue tile. Folding glass doors open the building to the outdoors. Jetting off the pavilion roof into the pool is a strikingly modern waterfall that also mutes noise from the street.

Damiani says the family uses the outdoor space as an extension of their home throughout the summer months — and also in the winter. 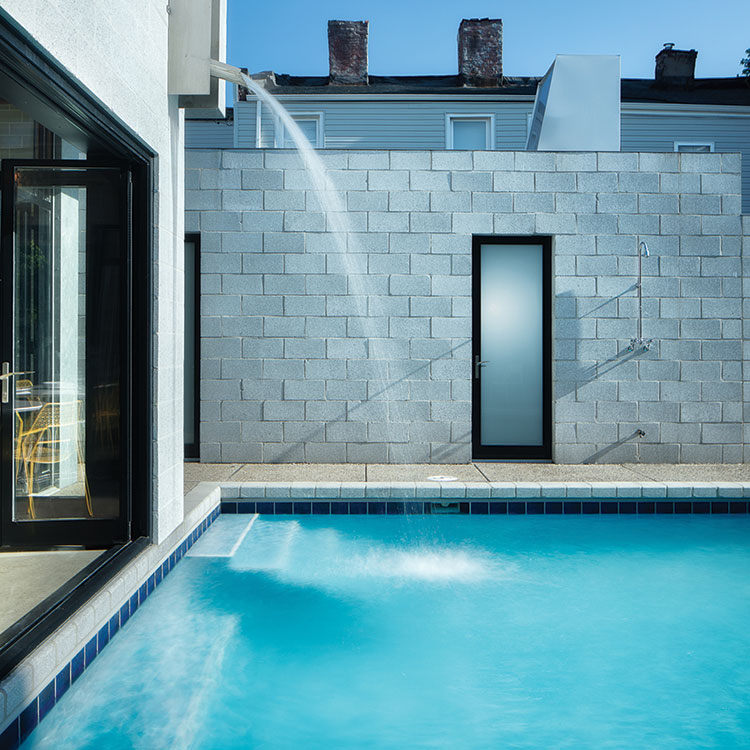 During cold weather, the basketball court is able to be flooded to create a skating rink. Two round scuppers on the roof of the pool pavilion, which overlooks the basketball court on one side, drain water onto the concrete. As the temperature dips, the water forms into two giant icicles.