Mired in controversial beginnings, a sleek contemporary townhouse nevertheless bloomed in a historic section of Pittsburgh’s North Side. 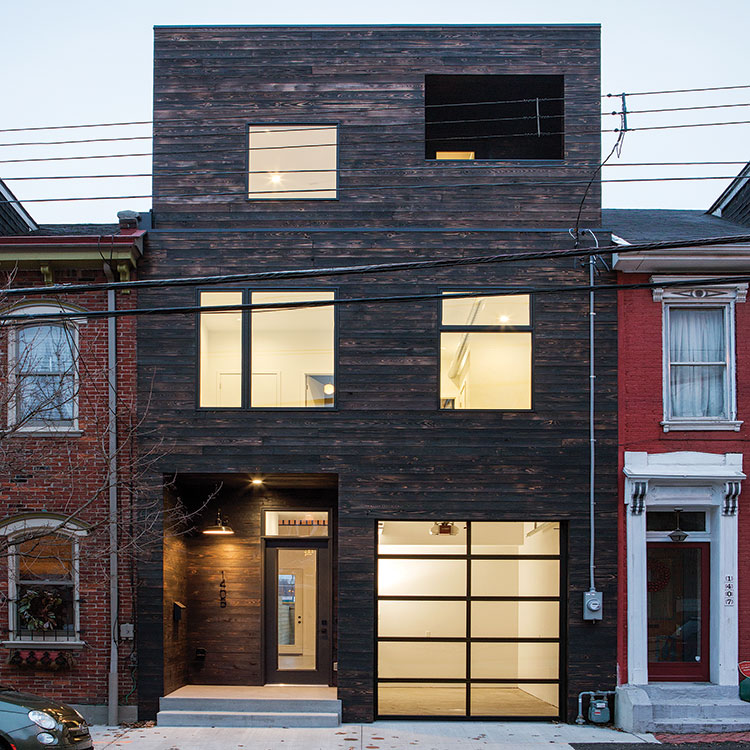 There was something about the lot across the street from the home Camden Leeds and Heather Johnson share on the North Side’s historic Mexican War Streets.

When the couple moved nine years ago into their house on Buena Vista Street, the mid-19th-century brick home across the way on what was later dubbed Lemmon Row — named for Thomas Lemmon, who built eight brick row houses on the street in the 1860s — was collapsing.

“There was no roof — it was falling in,” Leeds recalls.

After some unsuccessful push back from local historic preservationists who tried to stop the demolition, the city razed the building in 2013, leaving the lot empty.

Two years later, Johnson bid for the vacant lot at auction, snagging it for $12,000. With that, Johnson, aided by her husband, proceeded to design a contemporary, three-story townhouse with a striking charred wood exterior. The home was completed in 2018. 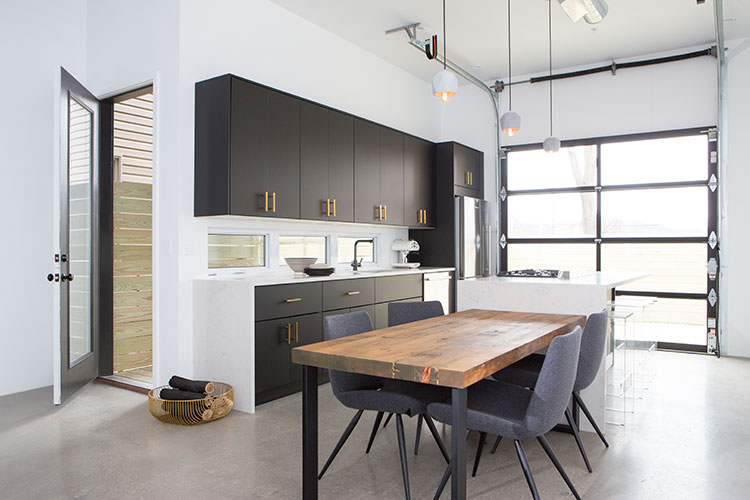 “I don’t know if I’ll ever get an opportunity like that again,” Johnson says. “I’ve been trying to find other vacant lots in the city, but it’s really hard.”

Praising the home for its open-concept plan, including a glass garage door in the kitchen that opens onto a deck as well as a cantilevered staircase that winds throughout the house, judges named it the Best New Home for 2019.

Besides their own place, the couple has designed three houses, including a project under construction elsewhere on the North Side. Though neither of them are architects, Johnson and Leeds work in creative fields. 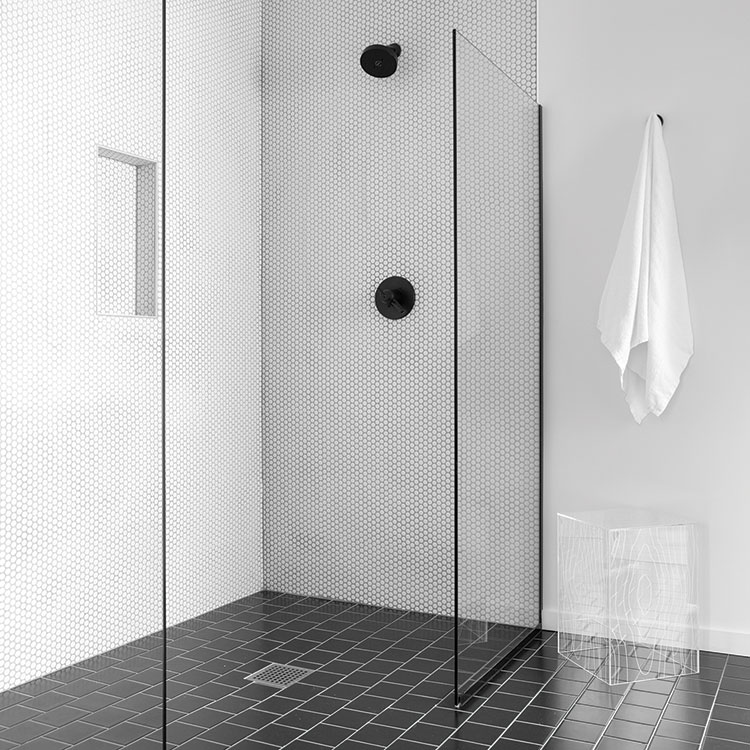 A hairstylist by trade, Johnson owns Alchemy Dry Cut Lounge in Lawrenceville. Leeds does graphic design, branding and packaging with his company, 1412 Design House. Johnson says she was bitten by the design bug during the renovation of her own home, a modern abode with fibrous concrete panels on the exterior that was featured in Dwell magazine.

“I just liked the process so much that I wanted to keep doing it,” she says.

“It was a creative outlet for us,” Leeds  adds.

Using old-school drafting paper, Johnson handsketched the interior and exterior for the home she planned to build on Buena Vista Street. She later hired a draftsman to put her designs into a Computer Aided Drafting program, then an engineer to give it a stamp of approval.

“I’ve never hired an architect on any of our projects,” she says. “I design the entire thing.” 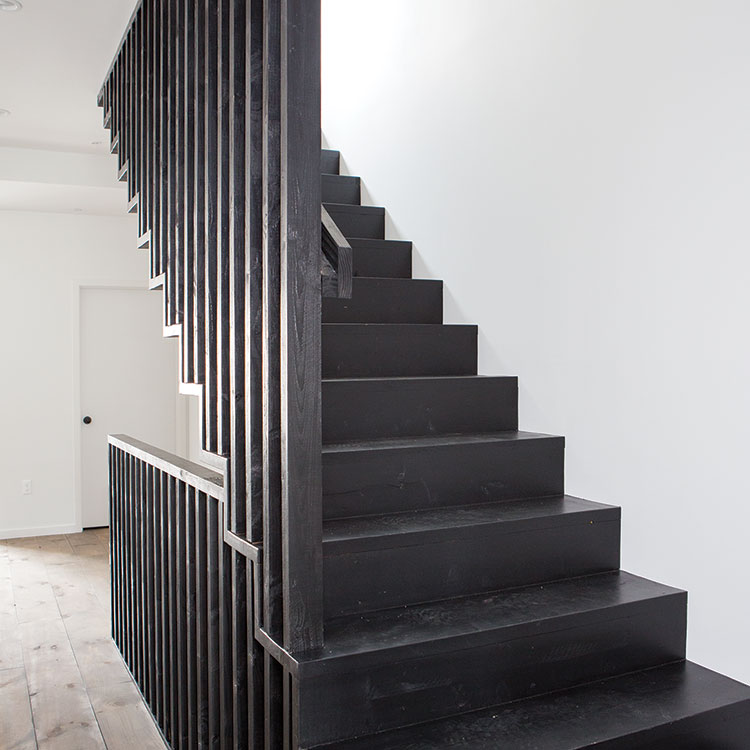 Signature designs in the Buena Vista house include white walls paired with an elegant matte black staircase and a catwalk overlooking the two-story living room. Indoor and outdoor meet in the kitchen — featuring black IKEA cabinetry with brass hardware and quartz countertops — with a glass garage door that opens to an expansive deck.

The top of the building also has a flat rooftop deck with a view of the city. Another porch is carved from the front of the building’s third floor, which holds two of the home’s four bedrooms. 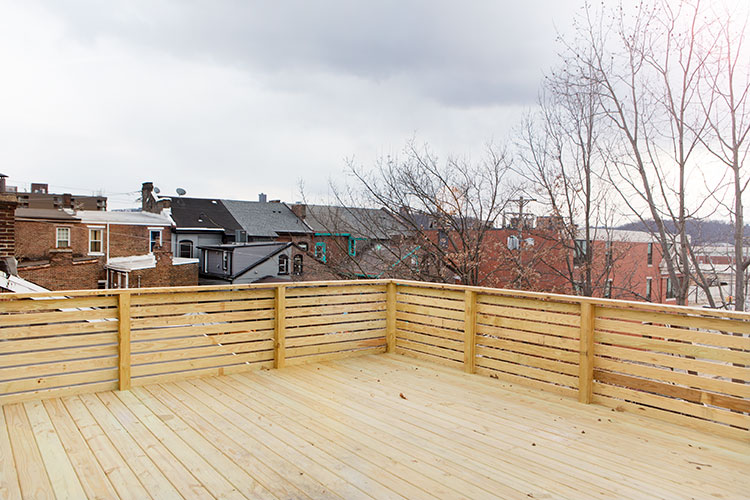 Also atypical for the North Side, where most garages are detached, is a glass-fronted integral garage on the building’s first level. The home’s first story has poured concrete flooring, while the second and third levels boast 10-inch pine plank floors hand-stained by Leeds using a favorite product, Rubio Monocoat.

Leeds also built a dining room table, plus shelving and the tops of the bathroom vanities, using wood salvaged from a house on the North Side that was torn down.

Then there’s that exterior. Using a method called shou sugi ban, a traditional Japanese process of charring wood as a way to prevent rot and mildew, the couple spent several weeks scorching the siding themselves using blowtorches.

“When we got to do this house, I said let’s burn it all,” Leeds says with a laugh. 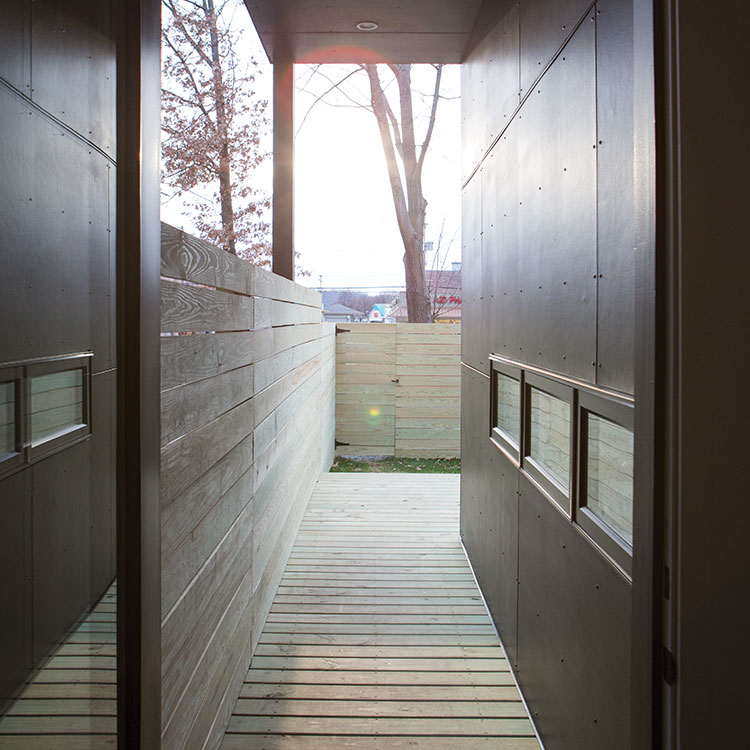 With construction by contractor Joe Konzier of JSK Construction, the building was completed in about eight months. Like the demolition of the original Buena Vista Street house, it was not without controversy. Some neighbors opposed the house, saying it was too modern and didn’t fit in with the rest of Lemmon Row.

However, the city’s Historic Review Commission approved Johnson’s designs for the new build in 2017. After the case was taken to civil court and appealed several times by preservationists, judges continued to rule in Johnson’s favor, including at the Commonwealth Court level in January.

Johnson was unbothered by the tension, noting it would have been impossible to re-create a 19th-century-era home, which is what she says the preservationists wished. 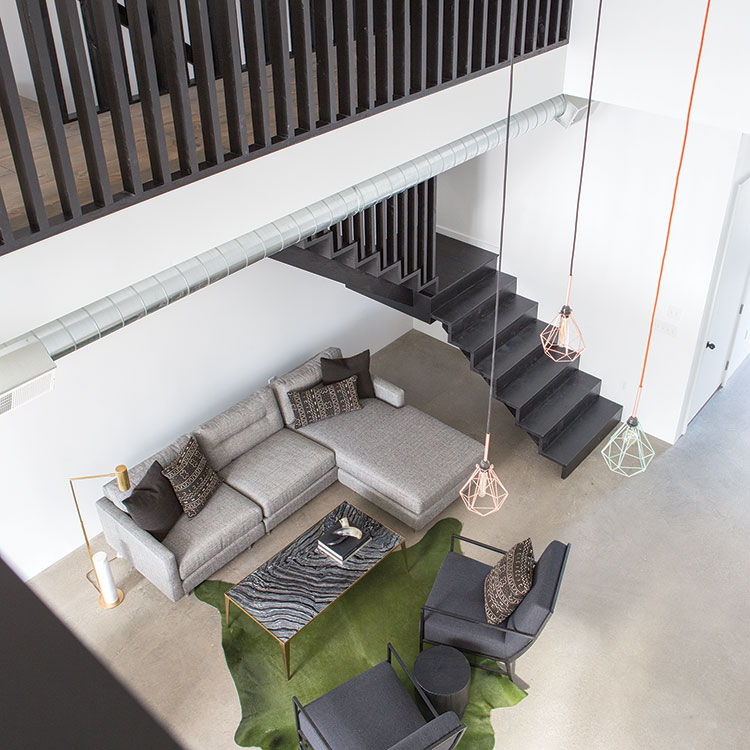 “It’s just hard to match a home that was built around 1900. They don’t even make building materials like that in this day and age,” she says. “When people try to mimic it, it doesn’t look historic.”

Then came the really hard part — the decision to sell the house.

For a time, Johnson says she and Leeds wrestled with a desire to move into the house themselves. Ultimately, they chose to put it up for sale, although their 8-year-old son was less thrilled with that choice.

“My son loves the house we built. He wanted to move into it so bad,” Johnson says. 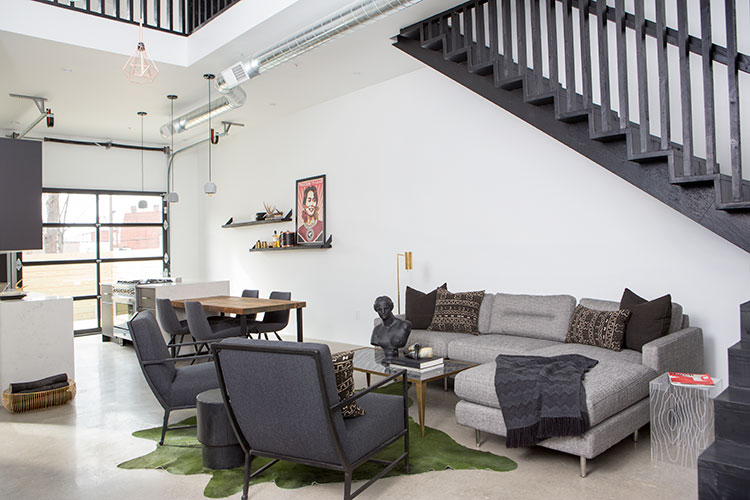 The house was staged for sale using furnishing from Weisshouse in Shadyside. The sleek, minimalist design, which judges raved over, featured a floor lamp by famed designer Kelly Wearstler and a bright green cowhide rug in the living room.

“We found this home to be the perfect modern canvas to highlight our sleek, less-is-more direction,” says Cyd Mello, creative director at Weisshouse and a friend of Johnson’s. “It’s a very current look that speaks to the metropolitan millennial movement that is popping up all over Pittsburgh.”

The house was on the market for about six months before it sold in the summer of 2018 for $595,000. Johnson says her real estate agent told her it was the highest price received for a home sold in the neighborhood at the time.

“It definitely took a unique buyer for the property,” Johnson says. “Because, I think, it’s so different, it’s not a property for everyone.

As it turned out, those unique buyers lived right around the corner. 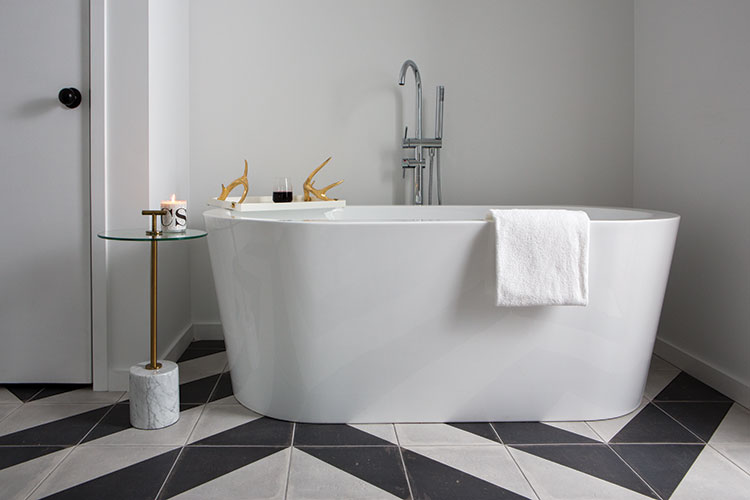 Previously renting on nearby Monterey Street, the couple — who asked to remain anonymous — already had decided to make their permanent home on the North Side when they fell in love with the Buena Vista Street home’s high ceilings and open-concept design.

As an added perk, the home in the walkable neighborhood was close to the husband’s already-established favorite coffee joint, Commonplace Coffee.

Today, the couple, parents to two young children, enjoy entertaining family in their new house. There was a well-attended Labor Day party where they had the opportunity to open up the glass garage doors and rooftop deck. More recently, they hosted a dual New Year’s Eve and 40th birthday bash. Even with 70 people there, the home didn’t feel cramped, the owners say.

The husband adds neighbors have been kind and gracious to his family since they moved in. He was unaware of any legal wrangling over the property until he was in the buying process.

“I don’t think that would have stopped me, though,” he says.