Five questions for Benjamin Wagner, director of the award-winning documentary "Mister Rogers & Me." 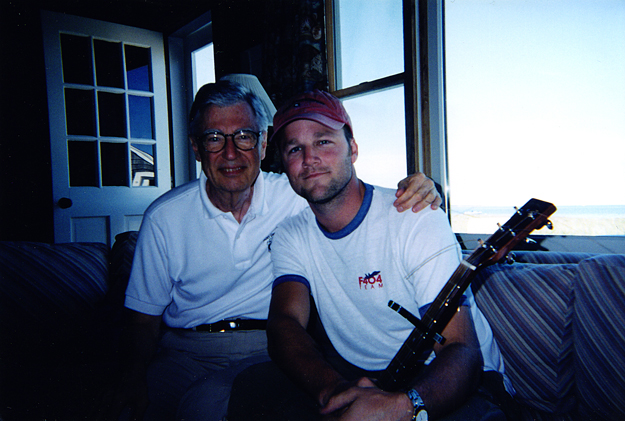 Eight-year-old Freddy Rogers was a shy, overweight, bullied boy who turned to the piano to soothe the emotional pain of his childhood. He would later refer to that as "crying through his fingers," struggling to deal with the torment he felt on a daily basis while growing up in Latrobe, Pennsylvania.

“If there’s anything that bothers me, it’s one person demeaning another. That really makes me mad.” — Fred Rogers

Benjamin Wagner was a sensitive and impressionable young teen coping with the raw wounds of his parents' divorce which resulted in a cross-country move that split up his family. Young Ben spent much of his time with his ears covered with headphones that were pouring out some of America's greatest rock music, and his nose regularly buried in the latest edition of Rolling Stone, from which he would learn that his musical heroes (Bono, Michael Stipe, Jeff Tweedy) were often inspired by hurt. Ben turned to music and his guitar to alleviate his own emotional pain — crying through his fingers, if you will.

"I keep thinking that evil would like nothing better than to have us feel awful about who we are." — Fred Rogers

When Mister Rogers — THE Mister Rogers — summered in he and his wife Joanne's so-called "Crooked House" in Nantucket, a small, unassuming cottage left to them by Fred's parents, Benjamin's own mother happened to rent the cottage next door. Thus, at the age of 30, Benjamin Wagner had a real-life neighbor in the greatest neighbor of all, Mister Fred Rogers. And that coincidental acquaintance would bloom into a friendship.

"I feel so strongly that deep and simple is far more essential than shallow and complex.” — Fred Rogers

It made sense then that Ben and Fred would become friends, as they had similar pain in their pasts — circumstances beyond their control had caused them hurt, confusion and uncertainty early on in their lives. They also had similar coping mechanisms. Fred turned to the piano, music and God, and from there he followed that path to the seminary and to creating “Mister Rogers' Neighborhood,” arguably the most-treasured children's program in television history. Ben turned to rock music and the guitar, and from there he followed that path to a recording career and a lucrative job in New York City with MTV, arguably our generation's leading pop-culture and music influencer.

Upon Mister Rogers' death in 2003, Benjamin and his older brother Christofer set off to learn more about the man they called neighbor and friend. They interviewed Mister Rogers' other friends — Linda Ellerbee, author Tim Madigan, Tim Russert and many more. Those interviews culminated in the award-winning documentary Mister Rogers & Me, a moving and stunningly eye-opening look at who Fred Rogers really was.

"The best thing you can offer anyone is your honest self." — Fred Rogers

After viewing the documentary, I can tell you that Fred Rogers is exactly who you thought he was — a good, decent, caring man. A true friend. A lover of the uplifting nature of humans and a despiser of their sometimes demeaning nature. A musician. A passionate children's advocate. A man who gave his everything to whoever was standing in front of him at that moment. A God-fearing, God-loving man who chose to lead by quiet example rather than pronounced evangelism. There is, beyond that, so much you don't know about Fred Rogers that you can learn from the documentary.

I had the opportunity to ask filmmaker Benjamin Wagner some questions about the film and about his friend Fred Rogers. These are his answers.

1. That first time you went to Mister Rogers' cottage in Nantucket, you brought your guitar with you. Why?

Well, my mother had already spent time with The Rogers and, as most parents do, had already told them all about me: my day job at MTV News, my aspirations as a singer-songwriter, and (probably) that I was the sensitive, artistic little brother. Both Fred and Joanne are musicians, as is my mother, so I think they'd already bonded over it. And at the time I was about to release a new record, one called "Crash Site," which was pretty explicitly about divorce and heartbreak and growing up.  So music was a means of working out what hurt, making it hurt less. (Which, it ends up, was apparently true for little Freddy Rogers too.) In the original voiceover of Mister Rogers & Me (which we had to edit for time), I mention just how nerve-wracking it was to play for such accomplished musicians. It was! Joanne has played Carnegie Hall! But it was exciting, and moving, and they were just lovely and gracious and warm. And I think Mister Rogers heard my heartbreak in that song, and that music was a primary language for both of us.

2. As each interview progressed, I noticed that every person said similar things about Mister Rogers. Common themes seemed to come out in each one. Deepness. Simplicity. Bringing the inner person to the outside. Goodness. It's okay to be who you are. Being present in the moment, etc. As you were conducting the interviews, did you notice that too, and if so, what did that mean to you?

Oh, of course I noticed the consistency of what people said as they said it, and the repetition. And we left it in on purpose; we really wanted to drive home that there was universal agreement on his values and strengths.  It bore repeating, again and again.  But I wasn't surprised; everyone described the man I met. I guess if anything it meant that my assessment of the him was sound, and that my inclination to spend ten years talking about his values — depth, simplicity, authenticity, integrity, honesty, vulnerability, sensitivity — was well spent.  These were all attributes I value (even if it took me some time to grow into them myself), and wanted to push into the cultural discourse as best I could.  So repetition and overstatement was important.  We tried our best to pace the film as Mister Rogers might have, and use simple tools like repetition to emphasize key points.  We wanted it to be the opposite of a chopped-up, sped-up, soundbite machine.

3. I never realized how many deep and absolutely profound things Mister Rogers said in his life. Other than the "deep and simple" quote, what's your favorite thing Mister Rogers ever said?

Hands down my favorite is "There's something of yourself that you leave at every meeting with another person." Not just because it related to Mister Rogers and me, but because it's the bottom line for all of us. If the least that we can do is remember that we're all connected, and that we impact each other and owe each other our best selves, well, then we're doing okay.

4. Did you relate at all to Mister Rogers using music as a child to soothe the hurts of his life? Crying through his fingers, I think is how it was put.

Absolutely. I grew up listening to all my mom's great ’70s LPs, from The Beatles and Peter, Paul & Mary to James Taylor and Carol King, and then got a transistor radio and listened to pop radio every night. And then right in the middle of my parents’ divorce, I discovered headphones. And that's where I initially escaped until I was a teenager and started playing in rock bands. I got my first guitar in college and started writing songs right away. Many, many tears were metaphorically shed songwriting — most of which are available on iTunes. So absolutely, I related. And as I said, I think he knew that. I think he heard that sadness, those tears, in "Summer's Gone." It was our point of departure. And it's one of the reasons I used my music in the film; in addition to it being a shared means of expression, Mister Rogers gave me the confidence to be vulnerable with my music, to stop striking poses and start being real and honest. Heck, he helped give me that confidence across the board. He helped me be my better self. I mean, what a terrific gift!

5. While filming this documentary, did you learn anything about Mister Rogers that you didn't already know?

Well, I didn't really know anything about Mister Rogers except his show as a viewer, and whatever sense of him as a man I'd gleaned from the few instances he popped up in broader culture. I was inspired by his authenticity. He was absolutely the same man in his living room in Nantucket as he was on set in Pittsburgh, but I didn't know how his childhood illness and weight issues affected his approach to humanity. I didn't know what a significant role he played in the establishment and advocacy for Public Broadcasting. I didn't even explicitly know how immensely impactful he was not just to the generations of children who grew up watching him, but the generations of media producers who were mentored, advised, or otherwise inspired by him. I didn't know any of it. At the end of the day, though, I guess what's so meaningful to me is that his story is all of ours. We've all been hurt and scarred and challenged and set back. The question is what we chose to do in relation to one another.

This article appears in the May 2012 issue of PittGirl.
Categories: PittGirl