Local beets stay in season through the fall, bringing delicious flavors and vivid colors to the table.

With their tough, knobby roots and crown of leafy greens, beets can intimidate the novice cook. Yet few other foods respond so well to the easiest of cooking techniques: roasting. High heat brings out their rich, round, earthy flavors, intensifies their natural sweetness and transforms them from rock-like to fork-tender.

Hues of dark purple-red or sunny gold make the root a pleasure to behold on the plate while varieties such as Chioggia, with its pattern of red-and-white concentric circles, are particularly arresting. An excellent source of folate, a water-soluble form of vitamin B found in food, and a good source of potassium, vitamin C and fiber, beets are nutritious and exceptionally affordable.

The plant, Beta vulgaris, is native to the Mediterranean. While people have eaten it for countless years, originally only the leaves were consumed. (This makes sense when you note that the chard is a variety of the beet.) Eating the root was known by the time of the Greeks, who wrote of it around 300 B.C., although these early roots were long, thin and often pale in color.

The first well-known sweet red beet, called the "Roman Beet," was introduced from Italy and eaten throughout Europe during the 17th and 18th centuries, although it was not a staple. In such far-northern climates as Scandinavia, however, beets did form a major part of the vegetable diet; where weather made winter trading impossible, beets ranked among the few garden vegetables that would keep well in storage.

Perhaps it’s no surprise then that one of the most famous beet dishes, borscht, a beet soup that’s usually topped with sour cream, hails from the chilly regions of Russia and Ukraine. Immigrants from these regions brought the dish to the United States at the turn of the century, and as they settled around the Catskills, earned that region the nickname of "Borscht Belt."

Associations with poverty and peasants gave beets a less-than-glamorous reputation for decades, but that began to change in American cuisine with the farm-to-table movement, which began during the 1970s with restaurants like Chez Panisse, located in Berkeley, Calif.

Today, trendy menus everywhere feature beets of all sizes: They might be freshly roasted and used in salad (see recipe, below), lightly pickled or grated into chutney or relish. With the local beet season lasting through the end of October, early fall is a great time to bring these beautiful, hardy, delicious root vegetables into your kitchen.

Top Picks: Beets grow well in western Pennsylvania, and peak season runs from June through October. It’s a testament to their place in regional cuisine that this is the birthplace of Pennsylvania Dutch pickled beets and eggs (the latter dyed red from the vegetable’s intense pigment). Whether you lean toward old-fashioned recipes like this one or the farm-to-table simplicity of an easy salad of baby greens and beets, use these tips to make the most of the root. 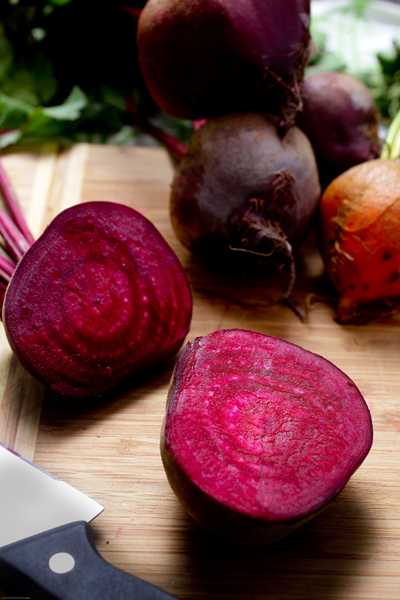 As soon as you bring beets home, cut off the leafy tops a little above the root and store them loosely wrapped in the refrigerator; they should keep for at least a week.

Mess-Free Prep: Beets easily stain cutting boards, hands and any food they’re served next to; if you want to avoid a mess on your hands or clothes, wear an apron and kitchen gloves. Save your cutting board from tough stains by giving its surface a light coat of nonstick cooking spray before chopping; the thin coating won’t feel slick under your knife and the board will easily wipe clean with a paper towel when you’re finished.

Easy Cooking: Roasting is the easiest, most rewarding method for cooking beets since it brings out their sweetness and preserves their beautiful color. If you have small marble- or golf-ball-sized baby beets, steaming can work well, but the process can take 45 minutes or longer with larger specimens. Boiling can lead to loss of flavor and color as their water-soluble pigments leech out into the water. (See recipe on the previous page for an easy roasting method.)

Using Beet Greens: Beet greens are typically thick, fleshy and mild in flavor—chard is a variety of the beet—and taste delicious when slowly braised. Select small-leafed bunches with narrow ribs and bright-green color. Cut the tops off about an inch above the beet and refrigerate the beets and greens separately in plastic bags. Because the tops quickly turn yellow and wilt, cook them within a day or two. Beet greens are a source of protein; folate; fiber; vitamins A, C, E and K; thiamin; riboflavin; vitamin B6; potassium; and manganese—among other nutrients.

This article appears in the September 2010 issue of Pittsburgh Magazine.
Categories: Eat + Drink Features, From the Magazine