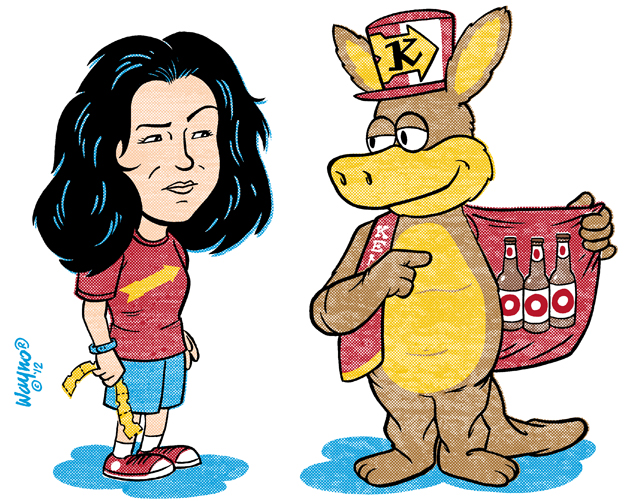 Back in April, Kennywood announced that it was seeking approval to place a “beer garden” in the park — a fenced-in area where of-age visitors could be herded and corralled to purchase and drink beer.

The word “garden” sounds so lovely — like colorful butterflies will alight on the lip of your Bud Light can while Cinderella prances about, singing with a chorus of bluebirds before watering the begonias and knitting socks for a family of destitute mice. “Garden” just seems like the wrong term for this enclosure. A gardener doesn’t typically erect a fence around his garden to keep the rabbits in (lest they scamper off with lettuce to be consumed illicitly in another part of the yard).

But semantics aside, I asked myself, How do you feel about Kennywood selling alcohol in such a “garden?” Yes, I made finger-quotes when I said garden. My dog looked at me funny. Especially because I was asking myself questions out loud.

It took me five minutes to decide that I didn’t like the idea very much. Not because I’m a prude pilgrim who believes alcohol is the devil’s brew — I’ve written a whole column on the glory of craft beer — but because I don’t necessarily believe that beer makes everything better.

Yes, alcohol absolutely does make some things better. Child-rearing, for instance. I don’t believe there are very many children who haven’t driven Mom or Dad to crave a drink. A long day spent fighting with a toddler who has discovered the reverberating power of a defiant foot stomp is best ended on the couch with five episodes of “New Girl” and a large glass of wine.

But does it make everything better?

Absolutely not. For example, I’ve long loathed those drunk, foul-mouthed, belligerent Yinzers at Steelers, Penguins and even Pirates games. Granted, I can understand why one might want to drink to forget at most Pirates games, but those drunk fans make bringing children to sporting events quite educational in nature. And not the good kind of education, like going to the Carnegie Science Center and discovering how a tornado forms. The bad kind of education, where they ask what a “#$%*-ing *#*%@*” is. My standard response? “It’s a computer virus, honey. Very nasty.” That’s what happens when you take a PG-rated kid to an R-rated stadium or arena.

And I don’t think alcohol can improve amusement parks, for much the same reason: The small few who lack self-control can ruin it for the whole crowd. It only takes one overly inebriated patron to make a scene or say things that no child needs to hear, leaving your day of fun at a family-focused amusement park marred. As a parent, it’s nice to go to a place where that sort of thing is off the table.

Not only that, drinking a few beers and then standing in the boiling sun for an hour to go on a ride that aims to make your stomach turn inside out and your eyes roll so far back in your head that they come all the way around again … well, that’s just not wise. I’d hate to be one of the kids on the clean-up crew if fermented hops are involved.

We have little control over which “family-friendly” venues sell alcohol, but we ’Burghers can control our behavior, especially around children. So at the very least, when imbibing in such an environment, please choose your number of beers sensibly. Choose your words wisely. Let those around you enjoy themselves, too.

And for the love of Kenny the Kangaroo, stay away from the Aero 360 if you’ve just washed down two boats of gravy-soaked Potato Patch fries with a couple brews. Also on that list of things not improved by beer? Vomit.

This article appears in the June 2012 issue of Pittsburgh Magazine.
Categories: From the Magazine, Hot Reads, PittGirl