Beehive is Soon to Buzz No More in the 'Burgh

The South Side coffee shop home to Pittsburgh artists for almost 30 years is closing – but the legacy of its longtime resident coffee drinkers and thinkers lives on. 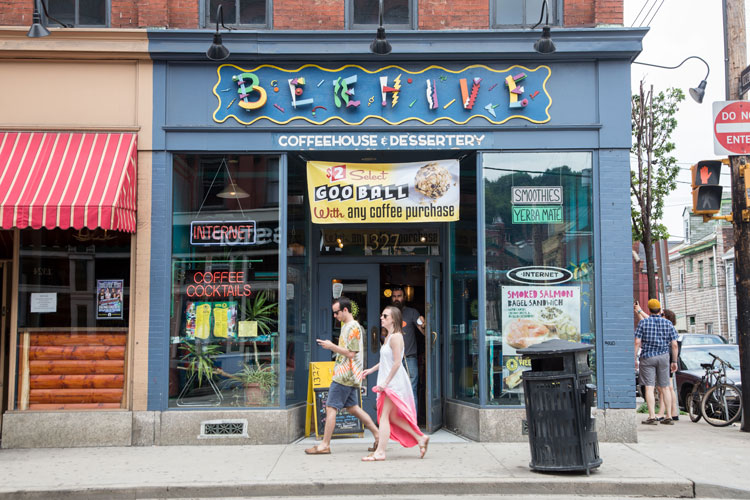 The Beehive era is nearing to a close. After 28 years, the Southside cornerstone of coffee and dessert is closing its doors within two to four months – for Beehive regulars, that also means turning out the light on many years of musing, writing and communing with other Pittsburgh creatives within its walls.

When it opened in 1991, co-owner Scott Kramer remembers a much different South Side than the one bustling today with cafés, galleries and nightlife. Many artists called South Side home, but they lacked a place to come together —Kramer’s coffee shop became that space.

“A lot of artists lived in South Side, many needed a place to hang out,” Kramer says. “When we opened, many of them started hanging out here.”

Kramer advertised a need for artists to come and decorate the shop at its opening – a call more than 50 artists answered.

“Many of those artists have now done very well for themselves,” Kramer says, naming Kelly Blevins and Jason Clymer among the many people whose hands covered the Beehive in art.

Despite its long run, Kramer says business at the Beehive isn’t what it used to be, and closing the shop became the best financial decision.

The Beehive is selling its license to a new owner, who plans to run a full bar and restaurant called “The Vault Taproom.” Kramer estimates the new restaurant will open within six to eight  months after the Beehive’s closing.

Before the shop closes in the coming months, Kramer is planning to throw a going away party.