Beat the Heat on Carson Street

Carson Street Deli is an underrated spot to grab a sandwich and a cold brew (and take refuge from the sweltering temperature). 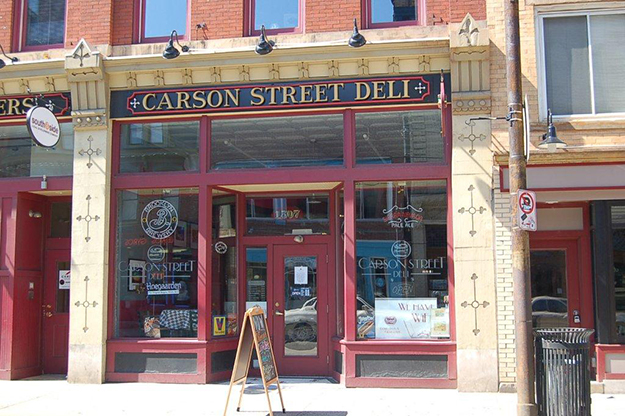 A quick check on my phone reveals the unpleasant truth: Yes, the already-bloated temperature is threatening to add a third digit, and it’s only noon. The streets of Pittsburgh are choked with sweaty, impatient people. You can quickly spot the buildings without air-conditioning – they’re the ones where angry faces are perched on stoops. No one’s walking their dog — at a certain heat index, you see, even dogs are solidly opposed to the idea. Sniffing a fern just isn’t that important.

And yet, I’m eating outside.

I’m having lunch in the secluded, quiet courtyard of the Carson Street Deli. Maybe it’s the shade provided by the buildings that stretch above the small beer garden. Maybe it’s the effect of a little peace and quiet. Maybe (okay, likely) it has something to do with the cold bottle of beer on the table. But I could swear that it’s fifteen degrees cooler in here.

I wandered into Carson Street Deli for the first time one afternoon earlier this week. I knew that they were well-regarded, and I knew that they inhabited the first floor of a historic old South Side building. But, to tell the truth, I wasn’t walking in expecting to be converted. I was running late, and I needed somewhere quick where I could grab something to take back to my desk. No grand hopes. No blog post in mind.

That attitude changed quickly — and, reminiscent of the genesis of many a post around these parts, it changed when I saw the beer. A long row of coolers, stocked to the brim with an excellent bottle selection gleamed along the far wall. The focus at Carson Street Deli is split between the best American microbrews (many varieties of Dogfish Head, Flying Dog, Victory, Rogue and many more) and Belgians; you can find a good number of brews from the middle of Europe here, many that you won’t often find in most ’Burgh coolers. You’ll see old favorites — but with so many new varieties to try, you’ll want to experiment. 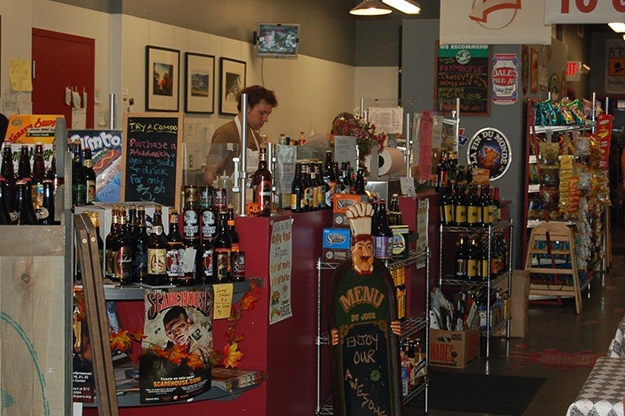 I picked out Victory’s Summer Love Ale to go with a Buffalo Chicken hoagie and headed for that beer garden. It’s actually a small courtyard, enclosed unevenly by buildings on every side; even as passersby from the neighboring businesses pass in and out, it feels like a getaway. The sound is masked, so it seems that East Carson Street is miles away, rather than mere feet.

Oh, and the sandwiches are awesome. This isn’t a place for some cold cuts on a hard hoagie roll; fresh ingredients, fluffy bread and tasty meat combine to make everything I’ve tried a memorable meal. Check out the Po’ Boy, with bursting, breaded crab cakes spilling over the edges of a baguette. Get it with hot sauce.

Even as I enjoyed my mid-day reprieve from the heat, I began thinking about the nighttime. Carson Street Deli isn’t open too late (8 p.m. Mon-Thu, 9 p.m. Fri-Sat), but that works out pretty perfectly. This is one of those rare East Carson joints were you can go out at night and still feel like a grown-up: roll in for a late dinner, stick around ‘til closing time trying different bottles under the night sky and then grab a six-pack to go on your way out. No elbowing through the college set to get a drink, no shots, no nonsense — and no gargantuan dinner tab to contend with. Just a full stomach and a good mood. Not bad for a little deli I just happened to wander into on a hot day.