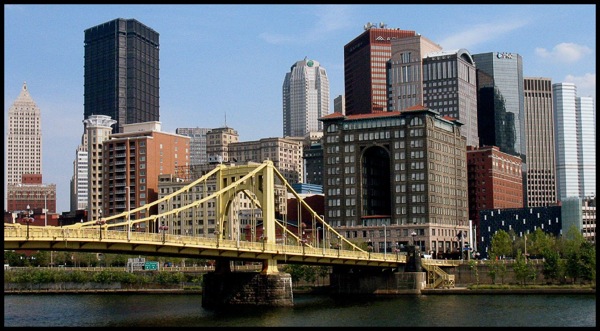 I had a conversation with a college professor recently when this question came up: “Is it possible to change the way an entire city of people thinks?” I’m paraphrasing a bit because I don’t have a didactic memory. The context of that question was how, on a whole, the people of Pittsburgh feel about the City of Pittsburgh.

My acquaintance’s feeling was that no, you cannot change how a city of people think. That in order for the city to change how it views itself, you must bring new people to the city who will look at it with fresh eyes, or bring back those that have left, because they will also see it with fresh eyes.

Some of you may laugh in my face at this, but I honestly think it started with Bob O’Conner’s short term as mayor before his untimely death. I think his Redd-Up Campaign and his general attitude toward the beautification of the city and the promise Pittsburgh holds, was infectious. He was working to instill pride in us. He sparked something, I think.

As a blogger and as a writer, I have seen a gentle shifting in attitude toward Pittsburgh, particularly in those actively involved in social media. It’s okay to say how much you love Pittsburgh. Blog it. Tweet it. Twitpic it. It’s perfectly acceptable to be gung ho, mama bear, don’t nobody talk bad about my city but me about Pittsburgh.

I believe this love and appreciation for Pittsburgh is infectious. It can spread. It can make Burghers look at the city with fresh eyes. It’s kind of like, and this is the only way I can think to describe it, have you ever been in the market for a new car and someone says to you, “You should look into the X-Car because it is getting some great reviews and it looks fantastic,” but you’ve never even noticed the X-Car. Never considered it. Then you start looking for it. And you see the X-Car everywhere. You see it on the streets, in the parking lots, in commercials, and you say, “How did I never notice the X-Car until someone pointed it out to me?”

In much the same way, I think that as Burghers start publicly acknowledging their love for their city and what exactly it is on that particular day that made them love it more, other Burghers are taking notice and are suddenly noticing those things, too.

For instance, note what actor Jay Baruchel said during an interview about the Pittsburgh-set and filmed movie, “She’s Out of My League.” You can read the entire interview here, but be mindful the language is, as my father would say, “salty.”

Capone: So you guys were in Pittsburgh? Did you go look for any Romero landmarks?
JB: We shot…There’s a place where we kind of built a set where the airport was. That used to be a mall, and I think that’s the mall from DAWN OF THE DEAD, which is kind of…cool, and I would like to just take a moment to say how much I absolutely love that town, not just because you don’t hear that very often. I truly love it, and I think our movie is many things and I think one of the things it is is kind of a love letter to Pittsburgh, because it looks beautiful in our movie, because it is an actual beautiful city.

It’s a great town full of great hardworking people and delicious food and a real nice way of life and they get, for whatever combination of reasons, they never get their due, and it’s an absolutely awesome place to hang out.

Do you see what he sees? I do. And it’s not just him. Russell Crowe told Sally Wiggin: "I have been to pee-wee football games. I have ridden something like 530, 540 miles on my bicycle. I know the north, south, east and west. I think it’s probably one of the friendliest cities I have ever spent time in in America. I really enjoy being here. Maybe it’s just because I’m an outsider, and I see things a little clearer, but nobody ever talks about the beauty of the architecture in Pittsburgh … It’s just gorgeous."

Forget about Sienna Miller and her bitter dislike for a city she never really saw because she spent all of her time in a hotel.

To explore it, to live it, to really open your eyes to its charm and possibilities, is to love it.

I kind of have a reputation for being a Pittsburgh Pollyanna – blind to the bad, focused on the rose-colored good about my city. Some love that about me; some are irritated by it. But the thing is this – I see the faults. I see the good-ole-boy politics. I see some corruption and questionable ethics. I see a gap in diversity. I see potholes and extravagant parking fees and traffic that would infuriate a monk. But those shadows are regularly brightened by the sun of what Pittsburgh is – a beautiful, old, world-class city full of hard-working, real, unaffected people.

I see the Pittsburgh that outsiders see and no matter how long I live here, which will be until I die, I will always force myself to see it that way. I’ll always hope that attitude is infectious and contagious and that slowly and surely people like me and you will be the agents that actually change the way an entire city thinks about itself.

This article appears in the March 2010 issue of PittGirl.
Categories: PittGirl