The Pittsburgh artist and entrepreneur’s public art display is making its rounds on Carnegie Mellon’s campus. 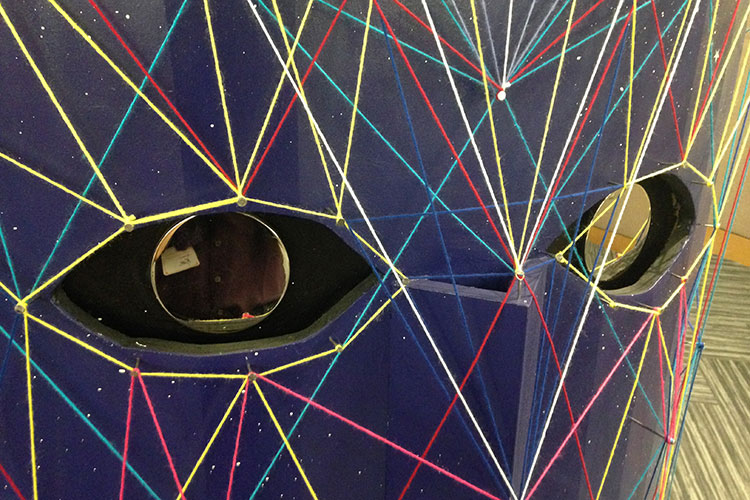 On February 12, a new face arrived on Carnegie Mellon’s campus. With mirrors for eyes and galaxies for skin, it sat in the Cohon University Center, waiting for passersby to pause and consider its presence. Out in the open, it invited viewers to step up and follow the colorful, taut strings that cross its face, examine their reflection in its eyes and walk around to see its take on identity.

Since then, it has moved to Hunt Library and the College of Fine Arts Great Hall, all part of Carnegie Mellon’s 2017 International Film Festival (IFF). Baron Batch created it to help raise awareness for the festival, offering an embodiment of this year’s theme, “Faces of Identity.”

The festival will begin Thursday, March 23 with a showing of Ken Loach’s I, Daniel Blake. Events stretch over the next two and a half weeks, culminating with Nele Wohlatz’s El Futuro Perfecto on Sunday, April 9. The theme is intentionally broad, allowing the inclusion of a wide variety of films and opening up conversations about how identity intertwines with each film. 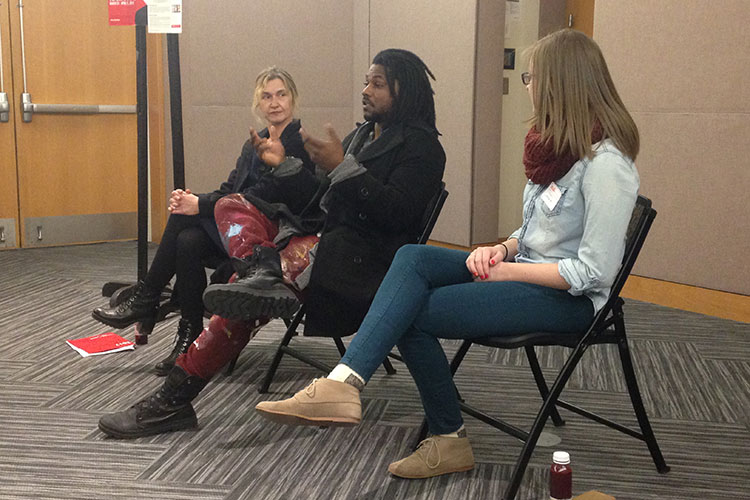 Entering its 11th year, the IFF wanted to advertise in a new, interactive, and thoughtful way. They reached out to Batch in December, and after considering the theme, Batch decided that “identity is a certain amount of the unknown,” as he said during a March 3 press conference introducing the piece. Conceived on a coffee cup, the art piece is made of wood, nails, string, candle lids, and spray paint, combined to give viewers a medium through which to contemplate that unknown.

The candle lids were the first parts found after the initial idea, and the rest of the piece was built around them. The silvery reflective surfaces allow viewers to examine themselves, creating a visual double entendre of Batch’s belief, expressed during March 3 event, that “how you respond to what you see is a reflection of you.” For Batch, mirrors reveal what people believe, giving people a way to make sense of the chaos around them and form their identities.

The CMU IFF began in 2006 as a promotion of cultural exchange and expression that also encourages cultural entertainment. It wants students to explore and be visionary, and it aims to give them the tools for thinking in ways they wouldn’t think in the everyday. 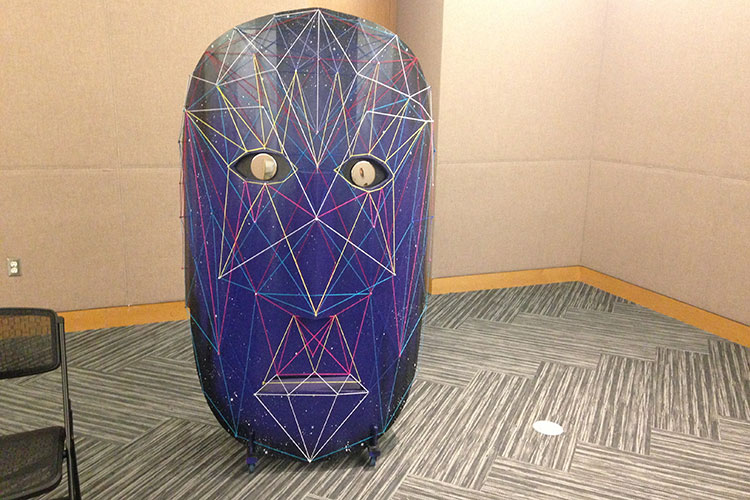 However, the festival also aims to reach out to the broader public, offering a non-academic bridge for the community to explore interests and themes across cultures. Screenings are accompanied by supplementary Q&A sessions with the films’ directors and local academics, artistic performances and receptions with local ethnic cuisine to lend structure to this exploration.

The 2017 film selections come from all corners of the world, including France, Poland, China, Brazil, Peru, Israel, Palestine and Mongolia. The films encourage thoughtful conversations about race, sexuality, gender and ethnicity in a time when identity is so closely intertwined with the individual and the pursuit of universal tolerance.

Batch’s alignment with the IFF’s mission makes him a fitting collaborator, and his art has helped people across the city engage in the reflection that the IFF wants to further. He places his art in public to disrupt the everyday, breaking up the numbing routine to make viewers more attentive to themselves and their surroundings. The open access is part of Batch’s philosophy that art should be free, not only in terms of its unlimited forms but also as an accessible medium.

His piece will be on display on CMU’s campus in the Cohon University Center until March 20; from March 20 to March 23, it will reside in CMU’s Hunt Library. As part of the film festival, Batch will take part in an exclusive event on Friday, March 31 that will feature what Batch calls a “question teaser” as well as a Q&A session with The Artist. Tickets for the event, as well as the full list of films, are available online.