Bar Exam: How to Tell A Good Hotel Bar from a Bad One

The recently renovated bar and restaurant inside the Sheraton Pittsburgh at Station Square is doing everything right. 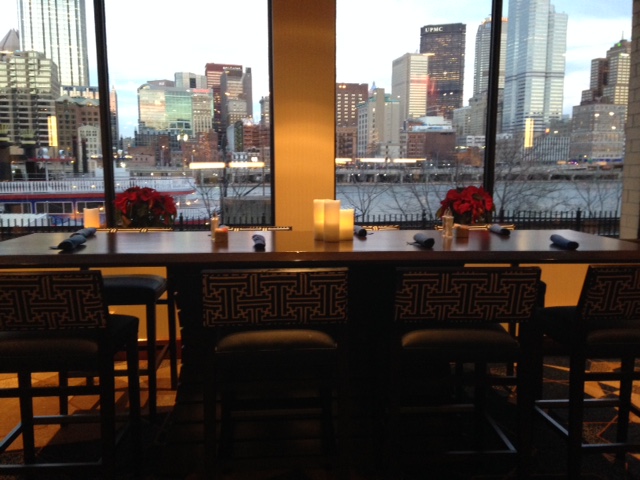 Past Bar Exam visits to bar/restaurants within hotels have met with mixed results. There are some (which I won’t assault again) that range from unremarkable to apathetic; others, such as Speakeasy or Braddock's Streetside, indisputably are very good bars.

And after today’s visit to Trackside, the sit-down portion of the bar and restaurant within the Sheraton Pittsburgh at Station Square — which is a good bar indeed — I think I spot a pattern.

Bad hotel bars try to sell themselves on class, quality and refinement. They scream, “We are a legitimate establishment, not just the only food and alcohol under this particular roof!” What they’re trying to do is convince hotel guests not to leave the building; they’re basically play-acting at being a serious restaurant, for better or worse.

Why is this a bad thing to do? Because it comes off as if they’re not concerned about the community; they’re not after locals or anyone passing through. It feels like bad hotel bars just want to convince guests to spend a bit more money. So they won’t be ingrained into the neighborhood — and, what’s more, the fact that it doesn’t really matter how good they are (a captive audience is a captive audience) breeds complacency.

On the other hand, good hotel bars sell themselves on the same stuff as any neighborhood bar — price, selection, specials, place in the community. Because these joints don’t simply want to hook another $15 out of every business traveler; they want you to come in even if you’ve never booked a room. They have their captive audience; now they want the neighborhood, too.

So, yes — Trackside is a good bar and restaurant. The space, formerly Pittsburgh Rare, sits at the back of the Sheraton’s lobby, beneath the towering glass facade that allows a look at the city beyond (provided that no trains are roaring by, hence the name). A more traditional lobby bar sits just before Trackside, and it certainly does its job; you can get a drink and sit in an easy chair or saddle up to the bar (with access to the full menu).

Within Trackside, though, you’ll find the neighborhood features I’m talking about. A weekday 5-7 p.m. happy hour with $3 beers and well drinks and $5 hearty apps. A weekday soup and salad bar (only $8) loaded with fresh ingredients. One of the best gameday specials within a stone’s throw of downtown (a select $2 draft during any game — that’s Pirates, Penguins and Steelers).

Trackside also encourages Pirates fans to make a pre- or postgame stop; park at Station Square, get a meal and then ride the Gateway Clipper to PNC Park. A bad hotel bar would not invite the jersey-clad crowds in; Trackside does.

And the food is miles from the ho-hum, ’90s-fine-dining retreads available at many hotels. I started my meal with the tasty and fantastically named Guacamame dip (that’s guacamole and edamame) before enjoying a great ahi tuna wrap with a side of ginger soy sauce. There’s a complement of sandwiches and entrees, but the emphasis is on small plates and flatbreads; I didn’t get a chance to try the short rib flatbread, but it was highly recommended.

Those who are just seeking a beverage will find a nice craft-beer selection, a number of great wines (stop by Monday through Wednesday evening to sample two top-rated varietals for $5) and a new craft cocktails list.

Add in the view and, in warmer months, second-level outdoor seating (for those bold enough to put up with the roaring train), and this is an underappreciated spot for locals and a boon for Station Square. While the Buca di Beppos and Houlihan’s of the world have their role, if you’re looking for a hangout on the South Side of the Point, Trackside is an excellent (and more locally minded) choice.