The popular South Side joint expands with a new Mars location, but does it capture the fun of the original spot? 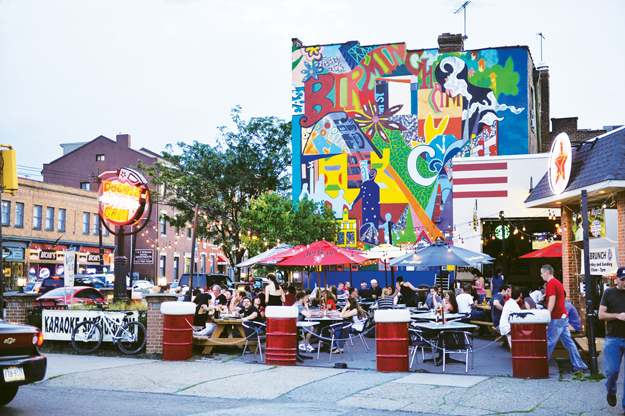 It’s just about impossible not to have fun at Double Wide Grill. Even if you go in a skeptic, some aspect of the down-home, yee-haw theme will have you giggling after a few minutes. (This time, it was the realization that they sell mason-jar sized, to-go “Meowlers” for those with a smaller-than-Growler sized thirst.) The food, with focuses on vegan fare and finger-lickin’ barbecue, will seal the deal. Add in some fresh air, great beer and half-ironic party nights — like upcoming luaus at both Double Wide locations — and what’s not to like?

The pair of restaurants has perfected unpretentious cocktails served just right — yup, you’ll be ordering shooters and Lynchburg Lemonade, but unlike the college bar where you first encountered the mixing of sugar and booze, they know how to do it right. The South Side has a new dog-friendly patio; the Mars location has a mammoth, two-hour weekday happy hour — half-off drinks, apps and drafts. They’re not fooling around.

And I truly believe that the “Build Your Own TV Dinner”, where you choose a bevy of fresh and delicious grub to fill up a metal serving tray, is one of the most filling and fun choices in town, especially after a long day. (Get the lug nut potatoes, no matter what.)

So why so much equivocation? Simple: I want to make it very, very clear that I like the place and endorse it thoroughly … before noting that there’s a big problem with the still-new Mars location. That’s the problem, actually: location.

We’ve noted before that the far northern suburbs are among the fastest-growing in the region, and Double Wide is not the only home-grown franchise to expand in that direction. I’m glad that they’re up there. It’s awesome that a variety of vegan fare and a killer beer list (Lindeman Framboise Lambic! Green Flash West Coast IPA! Unibroue’s Maudite, for pete’s sake!) is available in Mars. In that respect, the location is perfect; Double Wide is bringing a concept that works, very well, to a spot with a growing population. Very cool.

I just wish that they hadn’t planted their second creation — architecturally impressive and comfortable though it is — in the middle of a strip-mall parking lot. I know, I know, go where the people are. But a big part of Double Wide’s concept is outdoor seating; this is a place to hang out in the open air. And in the Mars location, the patio offers a view of the Dairy Queen across the lot or the bank across the street. And there’s a lovely porch; unfortunately, the only thing it overlooks is an area best described as a depressing grassy ditch.

If you’ve been up north recently, you’ll note that the expansion is not a crowded one. Development is constant, but there’s plenty of room to breathe. So I can’t figure out why a restaurant that’s so high-concept and focused on a comfortable experience would sandwich itself into such a ho-hum spot. The South Side original has the party feel of Carson street and great people watching; in Mars, you’re better off in the air-conditioned interior.

Am I quibbling? Definitely. If you’re in the area, go to Double Wide all the time. Eat well, drink well. Support a ’Burgh franchise that’s doing great. Again, I genuinely like the place. But if I could go to either location, I’d head for the South Side in a heartbeat. Location, location, location, right?