How can you say no to a drink called The 66 Blue Lemieux? 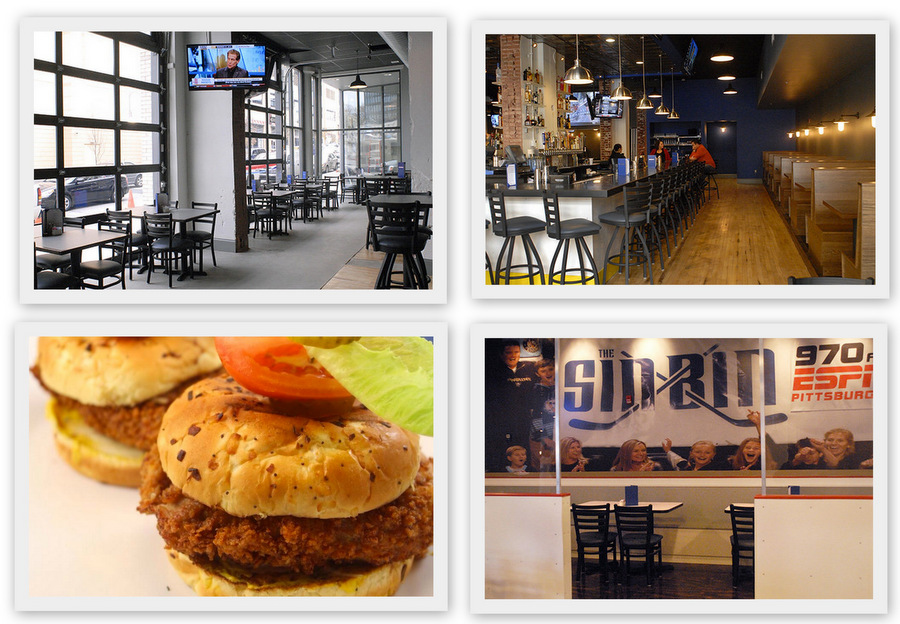 It’s becoming an accepted truth: Sooner or later, the immediate surroundings of the Consol Energy Center will become a bustling destination like the North Shore.

The Penguins’ home arena is still new, and the Lower Hill District is still shifting to accommodate it. But we’ve begun to see new construction and tenants surrounding the rink — and as the destinations around Heinz Field and PNC Park demonstrate, there’s always demand for more pre-game dinner options.

Enter Blue Line Grille, the new sports bar on Fifth Avenue, across the street from Consol’s American Eagle Outfitters gate. The joint opened last month and was heralded in local media by Pens great Phil Bourque, one of Blue Line Grille’s ownership partners; fellow Penguin alumnus Bill Guerin is also an investor in the property, which will eventually include residences and a rooftop club called, simply, Uptown.

For now, though, the Blue Line Grille — or BLG, as it frequently appears on the menu — is open until midnight or later, seven days a week. There are already reports of standing-room-only crowds before and after Pens games; no surprise there, given the relatively scant options in the area to date.

My previous favorite in the immediate area was the Red Ring restaurant around the corner. Come to think of it, apparently this is the “Color Shape” district. You know, Blue Line … Red Ring … OK, nevermind.

Cocktails are the focus at the sizable bar in the center of the room. The “Shock-A-Vodka” system is an apparent point of pride, a frosty contraption by which various liquors are chilled to a frigid 5 degrees Fahrenheit for cocktail creation. The featured drinks could be described as campus upscale: vodka, gin and Jaeger-based concoctions heavy on the booze and sweetness. The “66 Blue Lemieux,” with Svedka Citron, Blue Curaçao and housemade lemonade is a representative example. Beer lovers will find an acceptable draft list, with a smattering of microbrews and local favorites from the likes of Full Pint and Church Brew Works.

Sharing and snacking is the order of the day in the kitchen, as roughly 40 percent of the menu is made up of starters and the restaurant’s signature “Pen Wings”; burgers, sandwiches, salads and a short list of larger entreés round out the offerings. The poutine craze is in full force at BLG, where a sharing-sized appetizer is served in a skillet with a small pitcher of hot gravy on the side. I’ve had poutine at a variety of local establishments, ranging from high-cuisine to food-truck, and I think the BLG offering is my favorite so far.

While this spot is small enough that it’ll undoubtedly be hard to get a table on game night — and it doesn’t take reservations — there are a nice number of seating options, from tables and booths to a more secluded, lounge-like area to the rear. There’s also the “Sin Bin,” a mock penalty box that can accommodate larger groups. Pounding on the glass is, presumably, discouraged.

The service is friendly, the food is fine and the drinks are more reasonably priced than you’re used to this close to an arena. BLG follows sports-bar trends in most areas and picks a few to rise above the crowd; given its prime location and reasonable prices, that makes it a welcome addition. The neighborhood is going to continue to expand, but given BLG’s quality — and Penguins imprimatur — I’d wager it’s here to stay.

This article appears in the December 2013 issue of After Dark.
Categories: After Dark