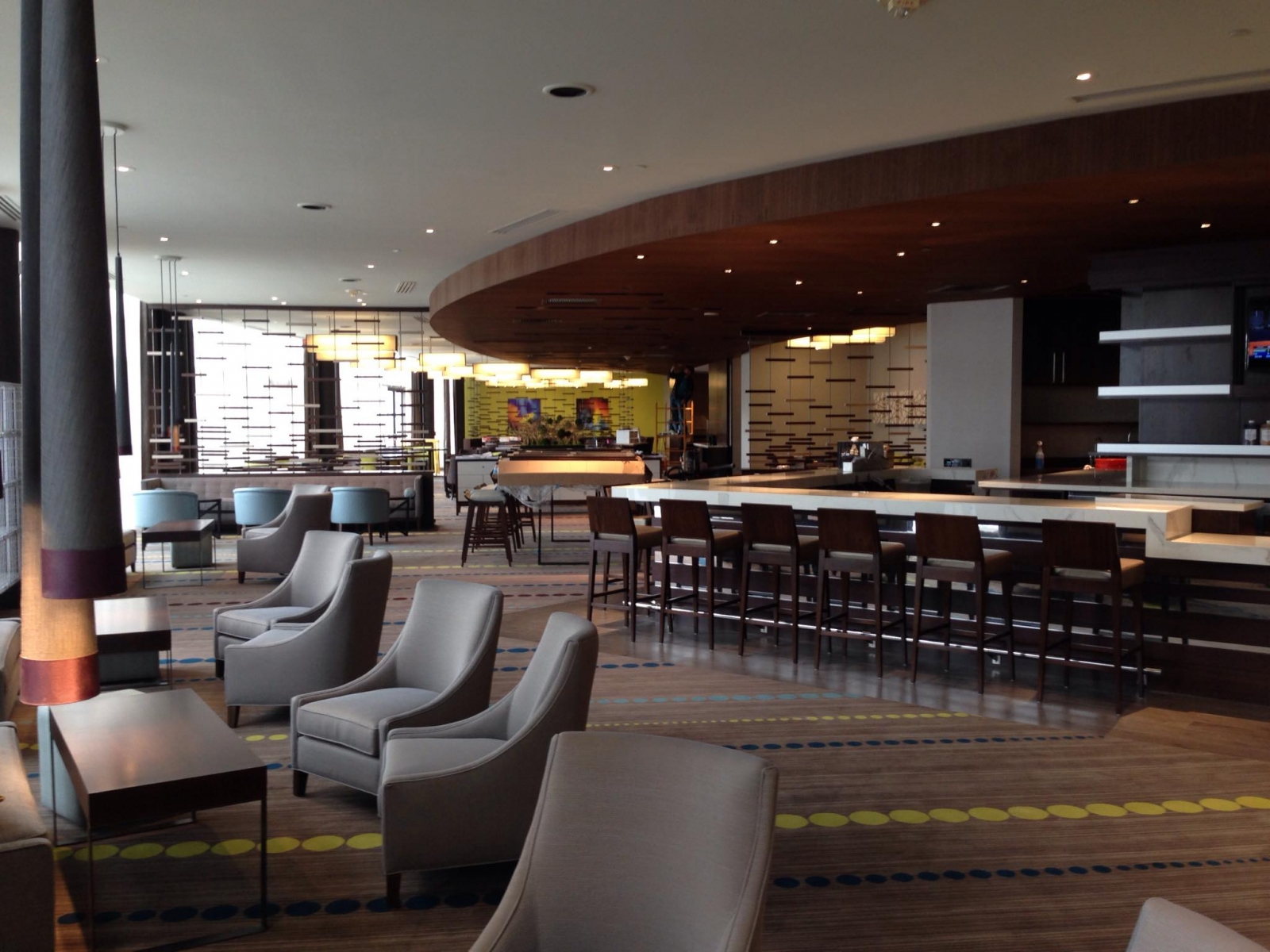 Yet here they are, all in the opening sentences of the press release heralding the arrival of bellfarm Kitchen | Bar: “Hyatt Regency Pittsburgh International Airport announced today the opening of bellfarm Kitchen | Bar, a new farm-to-table style restaurant. Located on the lobby level of Pittsburgh’s premier hotel, the venue provides guests and residents with a locally sourced, upscale dining experience.”

I knew a bar exam was required, and quickly. For one thing, bellfarm was going to be tasked with waving the flag for Pittsburgh’s food scene for those on an airport stopover; someone quickly passing through might not make it to Cure or Meat & Potatoes, but if they had a knockout experience at the Hyatt, it’d go a long way toward convincing travelers that our dining and cocktail scenes are legit.

What’s more, the hotel bar is an important bar. Oft-maligned and occasionally regarded as a default choice at best, the gulf between a sad, somber hotel bar and a well-thought, worthy spot is wide; a good hotel bar should not only become a hitching post for guests, but it should also be capable of attracting locals on its own merits.

So I visited. And I can report that bellfarm is … OK.

Walking in, I immediately noted that the Hyatt has followed a depressing, recent model of hotel dining wherein the bar/restaurant is only barely separated from the main lobby. I guess this theoretically is intended to be more inviting to those waiting in the lobby or passing by; in practice, it made me feel like I was drinking in a hotel lobby.

Guests kept wandering up to the bar and tentatively asking if they could get coffee to go because there was nothing to signify that they had entered a bar. (To be fair, the servers — who were uniformly excellent — obliged every request cheerfully.) Farther into the restaurant proper, there are some decorative touches that get points for effort. At its core, though, this does not feel like a restaurant nor a bar. And it probably should.

I ordered a Hendrick’s Lemonade, and it was excellent — a refreshing, just-flavorful-enough springtime concoction loaded with fresh strawberries and cucumbers I watched the bartender cut. The cocktail list is somewhat unfocused, but it offers careful takes on traditional favorites, often with fresh and/or local ingredients. And that’s exactly what a hotel/airport bar should do — provide a version of your favorite drink that’s even better than you anticipated. Some nice beer and wine choices are available as well.

The food, though. There was a curious lack of consistency to what I tried, which was surprising in light of how much the Hyatt hyped the food at bellfarm. A salumi plate contained a hearty helping of excellent meat, but it was next to a pile of cheese cubes indistinguishable from those on a grocery-store tray. (I love grocery-store cheese trays. I just was expecting a bit more here.) The signature bellfarm burger was topped with excellent, house-cured bacon, but the rest of the burger was disappointing — and in light of the burger boom around town, the bar has been set pretty high.

Look, this is a bar review, not a restaurant review; I am by no means an expert. But bellfarm shouted its foodie cred from the rooftops. Maybe I just picked the wrong items, but two signature menu items should not be less than stellar at a place that really wants you to pay attention to the cuisine.

This is doubly so at a place that inserts unnecessary italics, atypical capitalization and an unpronounceable character into its name.

Ultimately, bellfarm is an acceptable hotel bar and restaurant — the drinks are good, the atmosphere is so-so, the food is OK. Just like lots of hotel joints. But it really, really wants you to think more of it than that — and it’s just not there yet. I’d encourage travelers to venture into town for a good representation of the food in Pittsburgh — or at least make it to the Robinson Township area for a trip to Burgatory or Bocktown. As for locals … hopefully things will change as bellfarm gets on its feet. At the moment, though, there’s really no reason to navigate airport parking for this place.