This weekend may involve culture, spontaneous theater, 1,000 pounds of food and a $5,000 check. 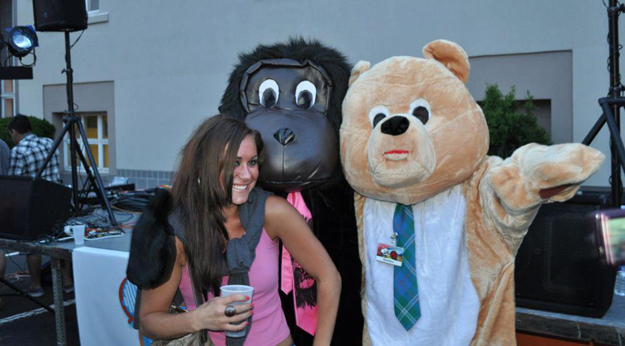 MCG Jazz's 25th Season Already Selling Out
Manchester Craftsmen’s Guild, the North Side institution that has elevated Pittsburgh’s place in the world of jazz performance, has come a long way in 25 years. It’s safe to say that it succeeds in its attempts “to preserve, present and promote jazz,” as the website states. And MCG's 25th season—just under way—is full of luminaries and can’t-miss shows, spanning a wide range of styles and eras. The lineup includes Chick Corea, The Count Basie Orchestra, Lee Ritenour, a tribute to Billy Taylor—who was the first performer on the MCG Jazz stage—and many more.

This weekend’s shows, featuring superstar Pat Metheny alongside Larry Grenadier, are sold out, as are the Oct. 15 concerts featuring Fourplay. Take this as a warning, then: Get your tickets for the rest of the season now. As for this Saturday, beg your jazz-savvy friends for help; or, if you’d like to scratch the itch but just can’t make it into the MCG Jazz Concert Hall, try The Eddie Brookshire Quintet at Little E’s, Tania Grubbs at Andys, or a performance by the Babatunde Lea Quartet at the August Wilson Center for African American Culture.
—Sean Collier, PM Associate Editor, pittsburghmagazine.com/afterdark

Food, Drinks, Music and a $5,000 Check
Yet another piece of evidence that Pittsburgh loves a good party—as if we needed convincing on that fact—is the ascension of Baller BBQ, a gathering that’s grown from a cookout with friends to a sold-out block party extravaganza. And in addition to the usual festivities—which are anything but usual, with 1,000 revelers and a trio of hot performers expected—this Saturday’s BBQ will feature the crowning of the Business Bout champion. It’s all about fostering growth in the ‘Burgh—but really, it’s all about partying. Read more in After Dark!

Join us Saturday, Oct. 15, 2011, at the Rivers Club of downtown’s One Oxford Centre for the One Breath at a Time “A Night of Masquerade” Gala to raise awareness and funds for lung disease education and research. Enjoy dinner and drinks, live and silent auction, entertainment, and more. Help the American Lung Association make a difference. For details, visit lunginfo.org/pittgala.

Quantum Heads to Polish Hill; Attack Theatre Says What?
Quantum Theatre, the ‘Burgh-hopping troupe known for staging productions in unlikely spots, moves into the former Emma Kaufmann Clinic on Brereton Street in Polish Hill for The End of the Affair. Artistic Director Karla Boos has adapted the Graham Greene novel about the emotional toll of infidelity and love in WWII-era England; proficient director Martin Giles is at the helm. Quantum’s great strength is in their locations, and it’s always refreshing to take the theater out of the theater; couple it with some time spent at nearby Gooski’s (3117 Brereton St.), and you’ve got an excellent evening on your hands.

Meanwhile, it’s the last weekend for Attack Theatre’s season premiere, What? It’s a spontaneously created theatrical event, and if I could tell you more about it, it wouldn’t be so spontaneous anymore, now would it?

In Theaters This Weekend: New films coming to Pittsburgh this weekend include the troubled horror flick Dream House; the somber comedy 50/50, with Joseph Gordon-Levitt, Seth Rogen and Anna Kendrick; and Anna Faris in romcom What’s Your Number? PM Film Editor Sean Collier will be on the 102.5 WDVE Morning Show Friday morning at 7:10 a.m. to review 50/50. He’s only talking about one film this week because of Dream House. Not only was it—allegedly—so bad that it's not being shown to critics, but stars Daniel Craig and Rachel Weisz, along with director Jim Sheridan, have all but refused to promote the film, which they think was ruined by the studio. And yet, after seeing 50/50, Sean kinda wishes he would’ve seen Dream House.

RCHA Sustainable Feast: Now is your chance to taste the scrumptious food prepared by some of the city's most talented chefs. This Saturday, the Rachel Carson Homestead Association will be hosting its fifth annual Sustainable Feast. Sit back and enjoy the live music and entertainment as these culinary wizards whip you up some delicious (and sustainable) treats. READ MORE.

Wicked: This weekend is your last chance to catch the hit Broadway musical Wicked.  Come learn about the girl who was born with green skin and how she became everyone's favorite villain, the Wicked Witch of the West. With multiple show-stopping tunes and amazing special effects, Wicked is sure to leave you speechless. READ MORE.

Artober: On Saturday, the heart of Bellevue’s business district will be transformed into the perfect setting for an all-encompassing, lively festival. The first Artober fest boasts food, prizes, libations and much more. READ MORE.

This article appears in the September 2011 issue of PMWeekend.
Categories: Things To Do