Baking History with the Largest Cookie Table in the World

A local organization is attempting to establish a record for the largest wedding cookie table in the world. 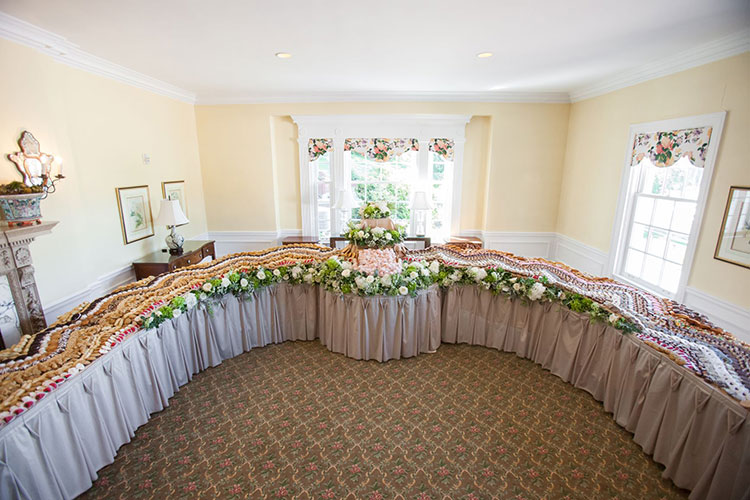 Arguably the best part of every wedding is getting to the reception to find a table piled mountain-high with a variety of mouthwatering cookies. This Sunday, dozens of bakers are taking the cookie table mountain to the next level as they attempt to establish the record for the largest wedding cookie table in the world.

Laura Magone, the creator of The Wedding Cookie Table Community Facebook page, came up with the idea to establish the record a few years ago, but she knew she wanted to do it during her hometown of Monongahela’s 250th anniversary celebration — and in the region where the tradition started.

The Monongahela Area Historical Society raised the money to hire an adjudicator from Guinness World Records, Christina Conlon, who will be present onsite to announce if the attempt was successful.

In order for the attempt to be considered by Guinness, there are certain guidelines in place: there must be a minimum of 10 cookie varieties, purchased or homemade, each cookie must be counted by a third-party counter not involved with the Monongahela Area Historical Society and there must be a health officer, in this case two, present.

In addition to those guidelines, in order for any food record to be considered by Guinness, there must be a plan in place to ensure that there will not be any food waste. Magone says they will be giving any cookie that is not eaten to 412 Food Rescue, Washington City Mission and different groups of first responders.

“The Guinness process is very thorough and detailed,” says Magone. “It boggles my mind.”

Magone says she doesn’t know how many bakers will be in attendance, but the response has been “tremendous” on the Facebook page, which has over 23,000 members. And these bakers aren’t just Pittsburghers, there are bakers coming from many different states to be a part of the record, including Colorado, Indiana, Maryland, West Virginia, and Ohio. Magone says even the Carnegie Science Center will be there with a science-themed table.

This record will be in a new category for Guinness and has never been established, but Conlon says a woman in Youngstown, Ohio made a cookie table with 18,000 cookies for her son’s wedding, so 18,000 cookies is the number to beat. However, Magone thinks they are going to be “well into the six digits on the number of cookies.”

In addition to all of the bakers, The Hershey Company will be there too. Magone says the Wedding Cookie Table Community established a relationship with Hershey in December after a member of the cookie table group noticed Hershey’s Kiss was missing its tip and the news went viral. Hershey’s Kitchens is unveiling four new recipes this fall and is providing bakers who attend the event with the new recipes to try them out. If the bakers make two batches of each of the four recipes, Hershey will give them a special apron.

“That's pretty exciting to have representatives of a major corporation coming to a small town,” Magone says.

How can you have a wedding cookie table without a wedding? Don’t worry, there will be three of them.

Three couples, maybe more, will be getting married that day, in addition to some other couples that will be renewing their vows. While this was a requirement from Guinness, Magone says she was insistent that it wouldn’t be a wedding cookie table without some weddings, and Monongahela is the “quintessential small town” perfect for a wedding.

“Once they are officially married, then the Guinness adjudicator will announce the number of cookies we had and tell us if we were successful in our attempt. Then the cookie tables will open,” Magone says.

Catherine Gruda, of Weirton, W.Va., will be attending the event with a team of four other women that she met through a cookie decorating class. She plans on bringing iced sugar cookies, and wants to make at least 30 dozen.

Her husband Tom Gruda will also be in attendance after he created a song about The Wedding Cookie Table Community Facebook page that Catherine says is “the official song of the page.” The short song is based on various posts that Tom found on the page of people having cookie disasters and asking for help; he will be performing this song during the event.

The event is open to the public and will be held at Chess Park in Monongahela starting with cookie drop off at 10:45 a.m. The Monongahela Area Historical Society will be selling boxes for those who want to sample the cookies. If you are interested in bringing cookies, more information can be found on the Facebook page; anybody who brings 10 dozen cookies or more will get a ribbon.

Perspectives: Sidewalk Parking Is Illegal — But, on Many Pittsburgh Streets, Necessary

Pittsburgh Pet of the Week: Meade