'Ask For It: How Women Can Use the Power of Negotiation to Get What They Really Want' 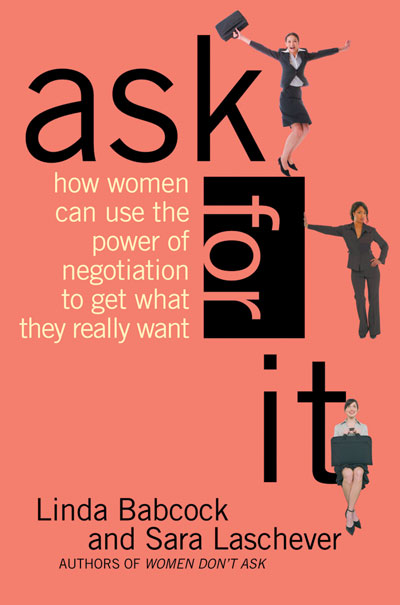 As I write this in March, the Democratic carnival is about to ride into town, and Hillary Clinton is riding a wave of resurgent feminism. It seems that many young women in particular—who grew up believing gender is, like, totally not an issue, and god, would you old bats stop your whining?—have come to see that (wow, who knew?) there’s still some good old-fashioned misogyny out there.

That we haven’t come quite as long a way as we thought, baby, would come as no surprise to Linda Babcock and Sara Laschever, whose new team effort, Ask for It, is the follow-up to 2003’s Women Don’t Ask. In that book, the authors examined differences in the way men and women negotiate. Bluntly: Men do it, and women—even younger women, who claim they do—don’t. Here, the authors systematically lay out the costs of women’s failure to negotiate successfully, especially on their own behalf.

For example, a 22-year-old who requests a $5,000 higher salary than offered and invests the difference, even conservatively, ends up saving three-quarters of a million dollars more by retirement, simply as a result of that one negotiation. And on the home front, where working mothers with full-time jobs still do two-thirds of the housework, the cost is higher stress, which can exacerbate health issues—not to mention lead to general crabbiness and the spiraling depression caused by realizing you’ve become a total nag and sound just like your mother.

Yes, the costs are high—as are the potential benefits to be realized. But how do you go about becoming the kind of woman who doesn’t shrink from confrontation or who considers herself lucky simply to be offered a raise at all? (Free hint: Never, ever, take the first offer.)

Babcock, the James M. Walton Professor of Economics at H. John III School of Public Policy and Management of Carnegie Mellon University, teaches courses in negotiation. She has adapted many of her lesson plans here, beginning with “negotiation gym,” a six-week program of asking for things: little things, big things, things you’ll probably get, things you probably won’t get. (Babcock herself once tried negotiating at a gas station, just to see what would happen.) The authors also break down the process of negotiation, from the preparation you need to do ahead of time—for example, figuring out what you want, not just what you would be willing to settle for—to the conversation itself: how not to blush at your own boldness, how to pace the conversation, how to keep sight of your progress and not get sidetracked.

Anecdotes from the authors’ lives and those of other women around the country serve as illustrations throughout. Some of these stories may make you cringe sympathetically. For example: “I finally asked for a raise and my boss said OK right away. Now I feel stupid for not asking for more,” says one woman. But other tales will make you want to stand up and cheer. (A 40-percent raise? You go, girl!)

Mostly, this book will make you want to give it a shot. (You’ll also want to figure out a way to get into Babcock’s classes, which sound like a total blast and life-changing as well.) True, women have traditionally been shut out of the game, and you might not win at first—but, as Babcock and Laschever make clear, you definitely won’t win if you play along by opting out of the game entirely.

Ask for It: How Women Can Use the Power of Negotiation to Get What They Really Want by Linda Babcock and Sara Laschever; Bantam; $25