Thousands will flock to downtown Pittsburgh for Saturday's grand event.

photoS AND VIDEO by Dave Cole

WATCH THE PARADE SATURDAY (THEN CATCH THE DONNYBROOK FIGHTS TUESDAY)
As much as we’d like to declare St. Patrick’s Day a national holiday, it seems that (for the time being) you still have to go to work on March 17, no matter how Irish you are. That means that the 2015 St. Patrick’s Day Parade once again will be taking place a bit early; the annual event will begin winding through town at 10 a.m. Saturday, with marchers departing from the intersection of Liberty Avenue and 11th Street. More than 23,000 people are scheduled to participate, and recent attendance has ranged from 150,000 to 350,000 revelers (so arrive early). 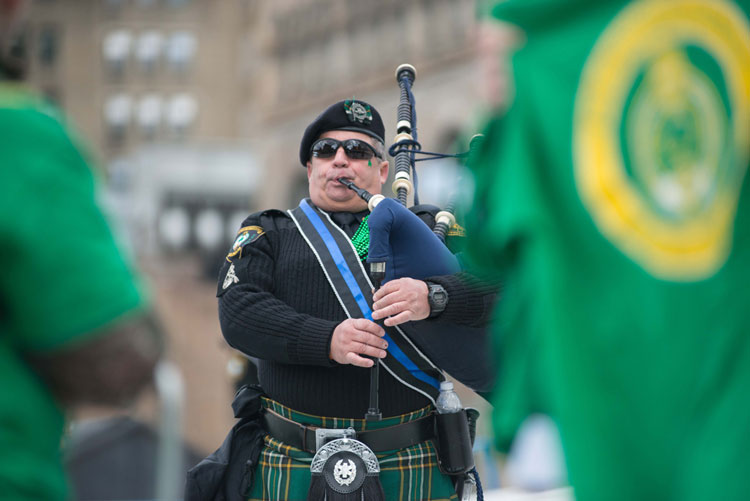 But don’t think that the day itself will go unmarked. Aside from a bevy of more unofficial celebrations around the city — scratch that, around the world — the second annual Pittsburgh Donnybrook, pitting boxers from Pittsburgh against Dublin’s Drimnagh boxing club, is set for Tuesday evening at the Priory on the North Side. Alas, the fights sold out in moments, so unless you’re holding tickets or have a Celtic hook-up, you may be out of luck. May we suggest drowning your sorrows in a pint of Guinness?
(Parade info, times and lineup here)

BELLA SERA’S CONCERT SERIES IS EVERYTHING GOOD ABOUT A WEDDING RECEPTION
The beautiful event and catering space Bella Sera has been expanding its offerings lately. The spot is opening its doors every weekday afternoon for a killer lunch buffet — but, in keeping with the nightlife theme, we’ll focus our attentions on the concert series Bella Sera launched last month. On select evenings, it’ll book a worthy band and invite all comers for dinner and a show. Awesome venue, good food, music — basically everything enjoyable about a wedding reception, and you don’t need an invitation. Read about tomorrow’s show and more in this week’s edition of After Dark!

FIX UP THE PLACE VIA THE PITTSBURGH HOME & GARDEN SHOW
If you visit the Duquesne Light Pittsburgh Home & Garden Show, things will get better around your house. And don’t think we’re just talking about the dedicated do-it-yourselfer with money to burn and grand ambitions. As a media partner, Pittsburgh Magazine is in attendance for the show every year — stop and see us, by the way! — and we can testify that there is a home improvement for every budget to be found at the sprawling event, whether you’re looking to replace your roof or simply score some excellent Tupperware. While you’re there, visit with Boyce Thompson for a look at his life-changing new products; it’ll be a preview of the awesome stuff you’ll be buying five years from now.
(David L. Lawrence Convention Center, 1000 Fort Duquesne Blvd., downtown; through Sunday; details here)

IN THEATERS: If you thought Disney had covered Cinderella a mere three months ago with “Into the Woods,” you underestimate Disney’s willingness to repeat itself. The Mouse House’s “Cinderella,” starring Cate Blanchett and Lily James, hits theaters nationwide this weekend. Meanwhile, Liam Neeson just can’t keep out of trouble; he’ll have to “Run All Night” to avoid Ed Harris’ team of gangsters.