Around the Horn: Q+A with the Pirates

12 members of the Pirates organization look back on the incredible 2013 season. 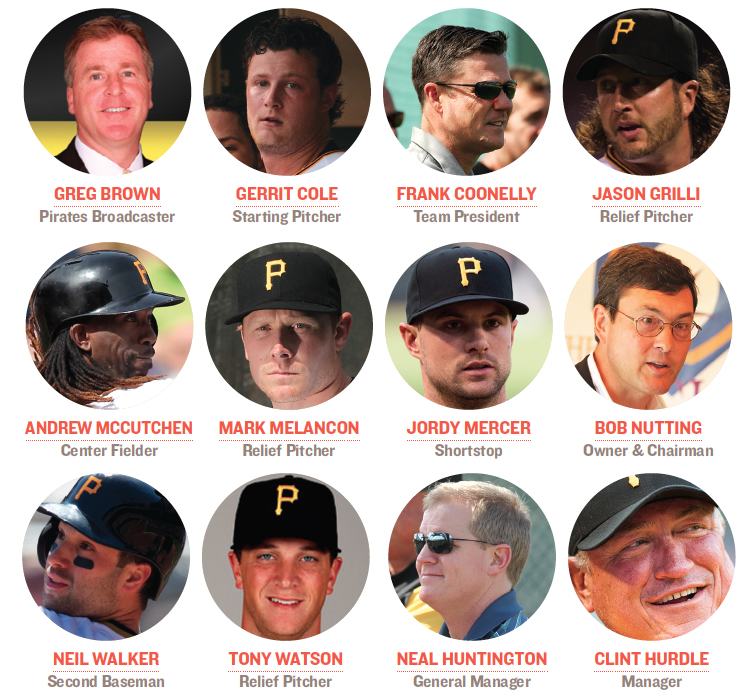 We went to different members of the Pittsburgh Pirates — the players, the front-office folks, the play-by-play announcer — and asked them to look back on the 2013 season. Here are some of their recollections.

■ At what point in the season did you realize, ‘Hey, this feels different’?

Jordy Mercer: Really from the day I got called up in early May, I could tell that this team was different from last year’s team, and adding a couple of different pieces helped as well.

Neil Walker: The biggest eye-opener in my opinion was the series [July 29-Aug. 1] against St. Louis. A makeup game and a four-game series, middle of the week, people jam-packed the place from Game 1 until the last game. That was the time when we said, “Wow, people are on board”. . . From a player’s standpoint, a team that was ahead of us and we beat them four games out of five, in my mind that was when I felt this thing was real.

Andrew McCutchen: It definitely was a buildup. There wasn’t really a moment where we said, “This is a different ball club.” But we had a belief that we were.

Neal Huntington: When we got through April. [The Pirates started the season 1-5 and 3-6 entering a stretch against the Reds, Cardinals and Braves.] There was a little bit of “Here we go again,” but the guys fought together . . . we kept our head above water.

Bob Nutting: The very first day of spring training . . . all the way bracketing on the back end on the wild-card game. All the way, I recognized and understood how fragile a season can be.

Tony Watson:  The [July-ending and] early August five-game series with the Cardinals, when the stadium was jam-packed and the crowd was into every pitch.

■ What’s your favorite fan memory from the year?

Clint Hurdle: The Wild Card game [Oct. 1] — the way the city showed [up]. The fan base. The game. We ran a pitcher off the mound.

Jason Grilli: To hear people say that they were planning their day around Pirates games, that’s huge.

Neil Walker: People are always stopping me and playing GM and giving me their two cents on what we need to do to be better. It might have been the lack of people’s advice this year that was the most striking. People aren’t saying, “Hey, you need a pitcher; you guys need a couple more hitters.”

Jordy Mercer: It had to be the Wild Card game against the Reds. It was an incredible atmosphere, and I will never forget the goose bumps I had because it was so loud and blacked out.

Andrew McCutchen: Just to hear people say, “Thank you.” . . . When you play a game and you do well, you don’t expect people to come up to you and say “Thank you.” It’s a real eye-opener.

Tony Watson:  The team introductions of the Wild Card game and the “Cueto” chant.

■ Identify a memorable moment on the field this year that a fan might not think of?

Mark Melancon: Garrett Jones’ home run [June 2] that he hit into the river on the fly.

Jordy Mercer: Lining up on the line during the Wild Card game. No fan knows how loud it was because we were on the field and they were screaming.

Tony Watson: [The] Travis Snider go-ahead home run in the ninth inning of win 81 at Milwaukee after back-and-forth eighth and ninth innings.

Clint Hurdle: Gaby Sanchez stealing second base against the Milwaukee Brewers. One of the coaches was watching me, and I put on the steal sign. He goes, “Did you know you put on  … ?” I said, “Be quiet. Yeah, I know!”

Greg Brown: The sheer fun and enjoyment of being at a professional major-league ballpark — in my opinion, [in] the best city in the country — and being able to watch a winning team.

Jordy Mercer: [That] we as a group came together and played hard every day. Clinched a playoff spot and ended the losing streak.

Gerrit Cole: I think kids are going to be like, “I watched Andrew win his first MVP. I saw El Toro hit a home run in almost every single playoff game. I saw Liriano come out of nowhere and take the heart of the city.” I think it’s going to be moments like that that they’ll remember — the many things that came together this year. Everybody’s going to remember that this was the start of it.

Jason Grilli: That it was time. It was our turn, and we showed that it was a process. That you don’t get everything you want in the time you want it. It was a few years’ process, and it took a lot of hard work. It’s the same heartbeat that this city always has had. It’s easy to play for people who you see how hard they’re working to do their job in this city, and I think that rings true the same way for what we did. They saw our hard work. They saw what we did every night.

Clint Hurdle: I saw one sign. It wasn’t the biggest sign, but it had the most meaning for me, and, I felt, for the city: “We’re back.”

Frank Coonelly: What I’d like it to be is a story of the beginning and not the end.

Andrew McCutchen: You can look at it and say, “There’s something that you wanted to do and you believed in, and for 20 years you failed at doing it . . . You tried so hard. But every single year you failed. But you didn’t give up. You stuck with it. And it finally worked for you.” Just imagine that feeling in that 21st year — that finally, “I can do this.”

Bob Nutting: [That] 2013 was the year that the great run of Pirates teams that we’ve seen for the last two decades began.

Tony Watson:  How many one-run victories, walk-off wins, etc., we came through with. Twenty-five guys pulling for each other every pitch, not caring about individual stats, with one thing in mind — to score one more run than the other guys.

Neil Walker: He’s probably going to talk about players like A.J. Burnett, and bringing in Russell Martin and Andrew McCutchen  . . . winning the MVP. I think the biggest thing from this year was that there were so many different contributors that it really was a team effort. It wasn’t two or three guys carrying the load offensively, two or three hitters carrying the load. It was relievers, bench players coming in and making an impact, walk-off victories, come-from-behind victories on the road. The play that got us into the playoffs in Chicago. There are so many different pieces. But the biggest thing is the contributions from so many people. There was no ego, no Barry Bonds-type guys on this team; no guys [who] were ruffling feathers in the media. It’s a very confident and quiet group. That’s certainly what I’m going to tell my kids about this year.

Neal Huntington: For your 10-year-old, I hope he says, “They made baseball fun again.”