Darren Miller is swimming where no American has gone before. 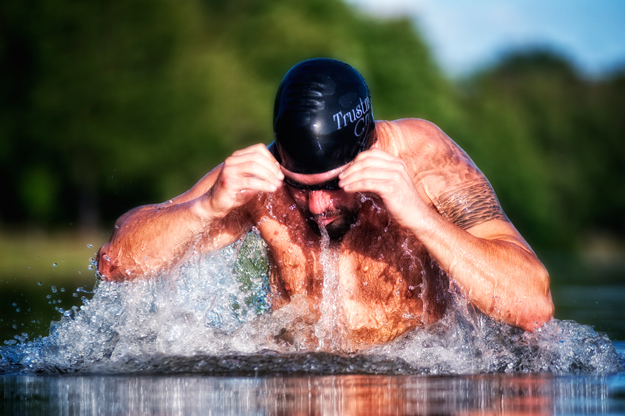 Darren Miller is a man on a mission. He’s hoping to become the first American to swim the Ocean’s Seven, a daunting athletic challenge in which swimmers must navigate the seven most treacherous channels on the planet.

So far, he’s crossed the English Channel, the Catalina Channel in California, the Molokai Channel in Hawaii and the Strait of Gibraltar. Last July, he swam Tsugaru Channel in Japan. And he’ll complete the hardest swims in the coldest waters next year — Cook Strait in New Zealand and the North Channel between England and Ireland. He’s completed each on his first attempt.

Miller, a 29-year-old resident of Delmont, Pa., is chasing a feat only attempted once before (by Ireland’s Stephen Redmond). But he’s not in it for recognition.

“While I obviously hope to be the first [American], I’m not going to pout if I’m not,” says Miller. “It’s obviously been an amazing journey thus far.”

He began swimming at a young age at the Murrysville Swim Club. “It was a sport I took to quickly,” he says. “I really enjoyed the water.” Miller threw himself into the pool day after day — until back and shoulder issues took him out of it. “After that, I transformed myself into a bodybuilder,” he explains. “I was in the gym all the time.”

Following a workout that left him, in his words, “huffing and puffing,” Miller again changed his athletic focus, this time to marathon running. “It turned out to be the best thing that ever happened to me because I found I had a knack for pushing myself long distances,” he says.

As a result, Miller became interested in open-water swimming — a discipline that combined his early love of the water with his later training in distance racing.

“I jumped in without any open-water experience,” he admits. After only a handful of warm-up races, Miller traveled to the U.K., where he swam the English Channel in 12 hours and four minutes. On subsequent swims, he shared the water with great white sharks, jellyfish and venomous sea snakes.

Miller completes these marathon swims to raise money for the Forever Fund, a charity that aids families in their struggle to afford the costs associated with infant cardiothoracic surgery at Children’s Hospital of Pittsburgh of UPMC. While the Forever Fund — which Miller co-founded with friend Cathy Cartieri Mehl in memory of her father — can’t help with medical bills (they’d bankrupt the humble charity), it supports the myriad incidental costs parents incur.

Miller works full-time as a private banker for PNC while studying for a master’s in psychology at Chatham University. For the past four years, he’s volunteered as a swim coach at Franklin Regional High School. And he’s a motivational speaker for local groups.

And in the face of any sort of challenge, Miller can’t be intimidated. “I don’t think I was born with a fear gene,” he concludes. “Right now, I have zero regrets. I’m living life the best I can.”

For more information, or to donate to the Forever Fund, visit darren-miller.com.

This article appears in the October 2012 issue of Pittsburgh Magazine.
Categories: Sports