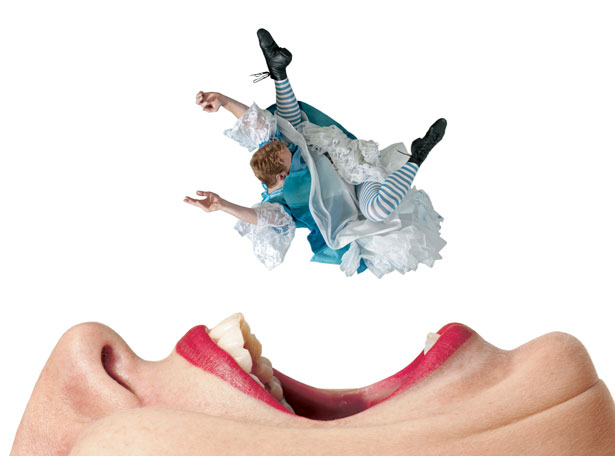 Her new contemporary-dance-theater production, Feed Your Head Café, a title inspired by lyrics from a 1960s psychedelic rock song, embraces elements from Carroll’s Alice’s Adventures in Wonderland (1865) plus several pop-culture sources such as the 1974 movie Alice Doesn’t Live Here Anymore and the 1967 song “Alice’s Restaurant” by Arlo Guthrie.

“My work explores the reality of growing up. The adage that children can become anything that they want to be is the ultimate albatross. The concept becomes a litmus test: ‘If I could be anything, then why aren’t I?’ Consequently, life is either a series of disappointments or a wonderland of compromises,” Corning insists.

Corning describes Carroll’s heroine as a fearless child and speculates about Alice as an adult. “All Alice really wanted to do was to be a country-western singer; instead she’s a middle-aged waitress in some little dive,” she explains. “Or is she?” Corning asks with a tease, noting that she plunks Alice and an assortment of unusual characters—including Michel Fokine’s The Dying Swan—into “an upside-down place” that blurs the perception of whether Alice or the audience is gazing through (or at) the looking-glass.

Corning began choreographing Café in January with DAT’s five dancers. Although the concept percolated for 15 years, she admits to approaching the initial rehearsal with trepidation. Her biggest challenge was assembling the components to create an arc for the nonlinear, 70-minute production. As the work progressed, her fear transformed into excitement. However, she admits, “I will consider it a success if the audience gets lost in the moment, and the work grabs their hearts.”

Later in the month, consider a second trip down the rabbit hole with Derek Deane’s two-act Alice in Wonderland, created for the English National Ballet. With its Carroll-inspired libretto, adaptations of John Tenniel’s illustrations and compilation of Peter Tchaikovsky’s music, Deane’s interpretation has garnered acclaim for its accessibility and stage wizardry.

“Unbelievable things happen,” says Deane of the Pittsburgh Ballet Theatre production. He goes on to describe self-pouring teapots, flying objects and magical entrances for several characters. “It’s a huge challenge for the crew and stagehands.” Act I necessitates nine set changes; Act II, seven. And, yes, there have been glitches. “Once, the flying house got stuck and had to fly out before flying in,” he recalls.

With the Mad Hatter’s zany tea party and the Queen of Hearts’ bizarre croquet game intact, Deane afforded himself a modicum of artistic license. In a dream-within-a-dream sequence, an exhausted Alice falls asleep in Wonderland and envisions herself dancing with the Knave of Hearts. “Every ballet needs a glorious pas de deux,” says Deane, who additionally created ensemble dances for tiger lilies and playing cards.

“Choreographing for so many animals was fun,” says the freelance dance-maker, who enjoyed collaborating with dancers while challenging them mentally and physically. “I asked for ‘oily’ movement for the caterpillar, which generated undulations suitable for a supple dancer.” When restaging the ballet, especially for PBT’s North American premiere, Deane emphasizes, “It’s important to get the casting right. However, if I find dancers who interest me, I will choreograph [new material] for them,” he says, noting his affinity for PBT’s enthusiastic and disciplined artists.

Deane and Corning concur that familiarity with Carroll’s tale is not required to follow their interpretations of Alice’s surreal journey. After all, it is to Wonderland.

This article appears in the April 2008 issue of Pittsburgh Magazine.
Categories: Things To Do