'Anything Goes' at Heinz Hall

This weekend offers a brief chance to see the award-winning production 'Anything Goes' as Roundabout Theater Co. makes a Pittsburgh stop on its national tour. 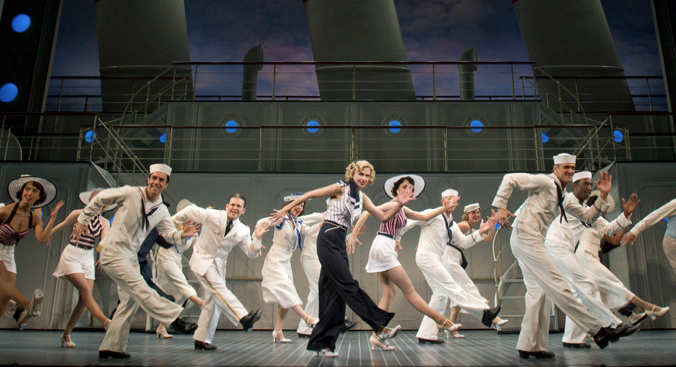 A Broadway heavyweight returns to Heinz Hall
To get an idea of the lasting impact Cole Porter’s 1934 hit Anything Goes has had on Broadway, consider this: Not only has the classic won a Tony Award for Best Revival of a Musical, it has done so both times it was revived. The 1987 blockbuster revival starring Patty LuPone took home the trophy; the 2011 hit did it again. This weekend offers a brief chance to see that award-winning production, as Roundabout Theater Co. makes a Pittsburgh stop on its national tour. For the uninitiated, Anything Goes isn’t just a fun show — it also serves as a pretty thorough Porter greatest-hits collection, spotlighting canonical tunes like “I Get a Kick Out of You,” “It’s De-Lovely,” “You’re the Top” and “Let’s Misbehave.”

How to Jazz up your spring
In case you’ve been out of the loop, we wanted to remind you it's National Jazz Appreciation Month. Yes, the month is already half over — but don’t fret: There’s still time to celebrate at some of the city’s coolest jazz festivities.

We know that the remaining Cultural Trust jazz events don’t fall on the weekend — but we thought they were just too good to skip. On Tuesday, “veteran soul singer” Bettye LaVette will perform at Cabaret at Theater Square. And to cap off the festivities, Jazz Meets Funk Vol. II with Sean Jones and Dwayne Dolphin on April 30 will get your feet tapping to a jazz-funk collision of trumpet notes and drum beats. However, if you still want to jazz up your weekend, check out other jazz spots around the city — such as Little E’s Jazz and Blues Club, for performances by Velvet Heat (tomorrow) and the Eddie Brookshire Quartet (Saturday).

A sports bar blooms in Sewickley
What makes the quaint village of Sewickley relatively unique is a sort of unlikely independence; in contrast to most ’hoods and nearby suburbs, Sewickley does not really feel like a part of the city. It feels simply like itself. We were recently tipped off to the presence of Sidelines Beer House, not two blocks from the main drag of Beaver Street; we quickly discovered that if entering Sewickley is to exit Pittsburgh, setting foot inside Sidelines is to re-enter the Steel City. The neighborhood may cry afternoon tea, but Sidelines screams happy hour. Get the full report on this hidden beer haven in this week’s edition of After Dark!

In Theaters: Everybody’s running to get out of Tom Cruise’s way this weekend, as his sci-fi epic Oblivion is the only wide release to hit Pittsburgh theaters this weekend. The flick is tough to crack, as some long-winded explanation is required to set up Oblivion’s clunky premise; by the time things start to build to a finish, though, you’ll be hooked. If you’re looking for something a bit more down-to-earth, though, Terrence Malick’s To the Wonder debuts at the Harris tomorrow. —S.C.

Three generations of feisty Irishwomen take the stage for the City Theatre’s presentation of Elaine Murphy’s Little Gem this weekend. Click here for tickets and information.

Join the Pittsburgh Botanic Garden for the first of two free Dogwood Meadow Tours this Saturday at 10 a.m. This scenic, informational trek is great for photographers and intellectuals alike. Click here to register. —K.H.