Anything But Passive – These Houses Can Save You Money

The passive-house movement has come to Pittsburgh, spurring developers to create more eco-friendly environments for homeowners. 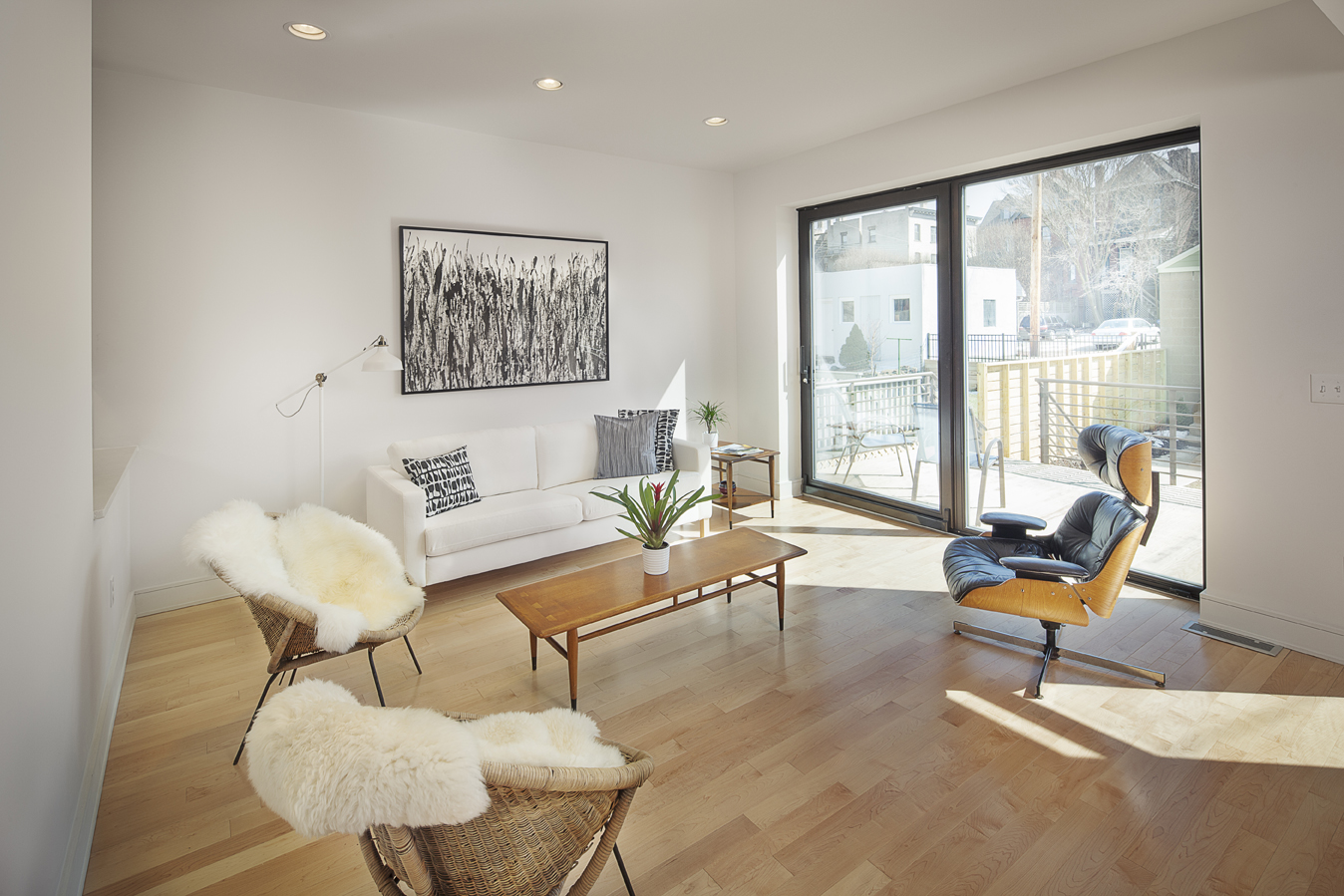 It’s winter in Pittsburgh, and the freezing wind outside seems to slice right through you. When you must brave the elements, you can choose between two coats: a lightweight jacket or a down-filled parka.

Passive houses — dwellings which have been so well-insulated that they use minimal energy for heating and cooling — are becoming more well-known in the Pittsburgh area as environmentally conscious homeowners seek solutions for decreasing their ecological footprints. The passive-house concept originated in Germany in the early 1990s and has gained increasing popularity since then across Europe. 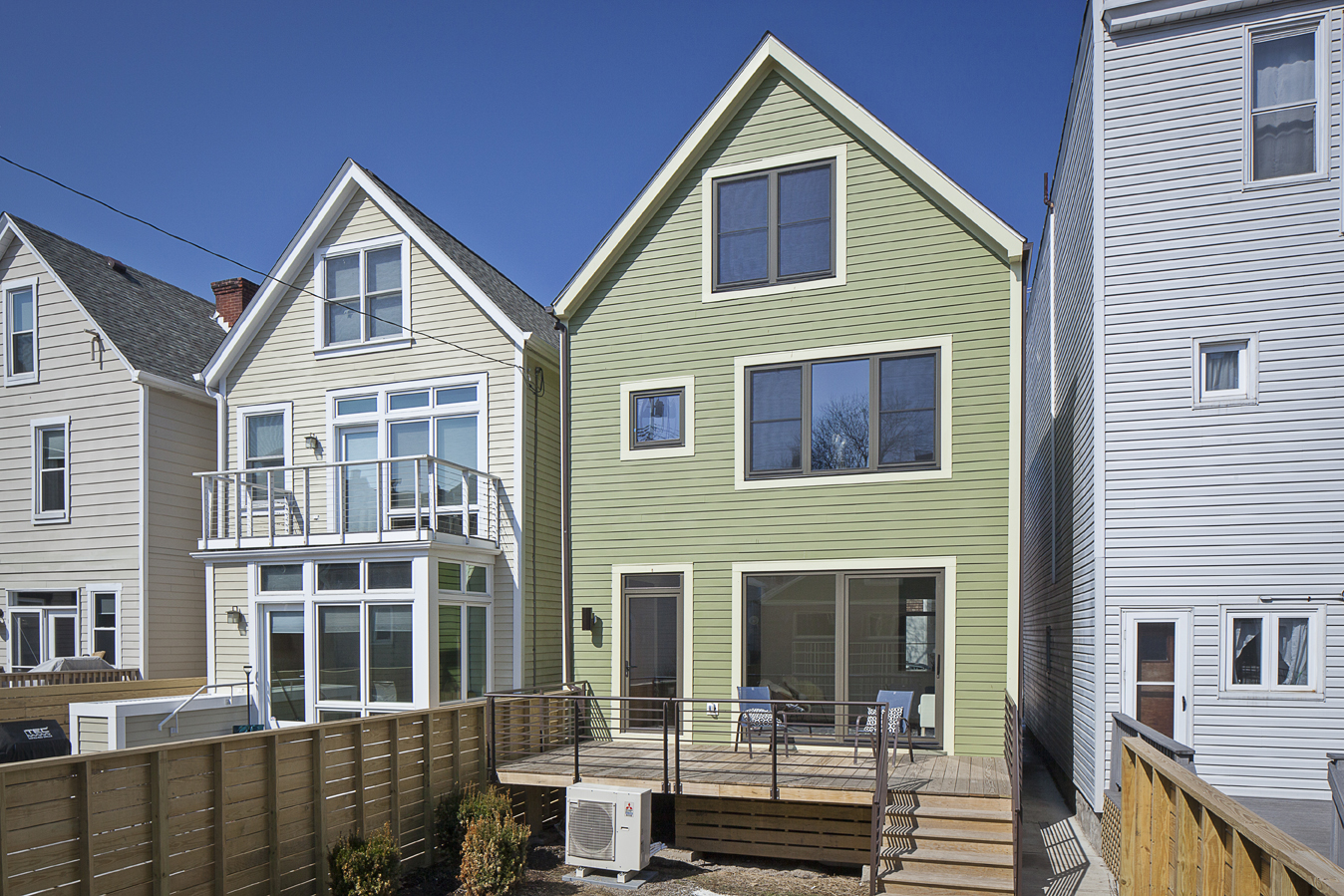 “There are probably 60,000 buildings in Europe at this point that are passive house,” says Laura Nettleton, owner of Thoughtful Balance, a Pittsburgh-based architecture firm specializing in sustainability and low-energy design. She’s also the founder and past president of Passive House Western Pennsylvania, a group that provides education, outreach and training for architects and engineers who are interested in becoming certified as passive-house consultants or builders.

According to Passive House Institute US, a nonprofit organization dedicated to making passive-building principles the mainstream best-building practice, there are 111 certified passive-house projects nationwide today. Five of them are in Pittsburgh, and many more projects here are being built to passive-house standards.

Local homeowners are realizing that, in addition to environmental benefits, a drastic decrease in utility costs is worth the initial investment in passive-house construction.

“Interest is definitely on the rise,” says Nathan St.Germain, owner of architecture firm Studio St.Germain in Sewickley. St.Germain, whose firm consulted on a project in Colorado that was one of the first passive houses in the country, is a member of the board of directors for Passive House Western Pennsylvania. “I use car analogies to explain it: In terms of performance, the house is like a Ferrari. There will be additional costs, but there are returns on the investment.” 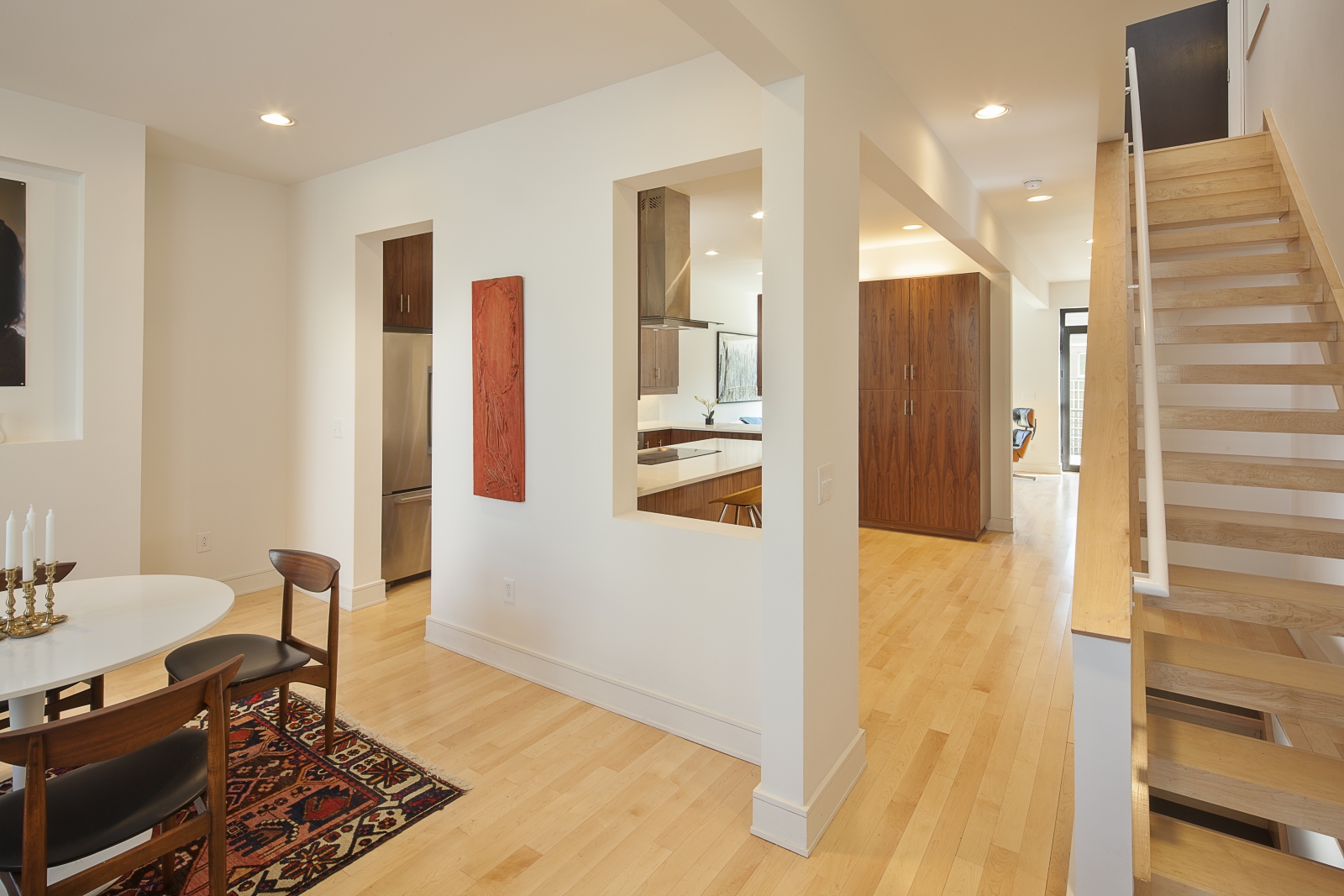 The passive-house standard focuses on the envelope of the building — the walls, openings, efforts to avoid air leaking in or out, window insulation and orientation. It is a performance-based system, which differs from the more commonly known LEED, or Leadership in Energy and Environmental Design, a point-based green-building certification program. Whereas LEED addresses the full spectrum of environmental issues, such as air and water quality and sustainable materials, passive-house design deals primarily with energy.

ACTION-Housing, a nonprofit organization focused on providing affordable housing, has been at the forefront of developing local passive-house projects, including the first such project in western Pennsylvania, a single-family home in Heidelberg. 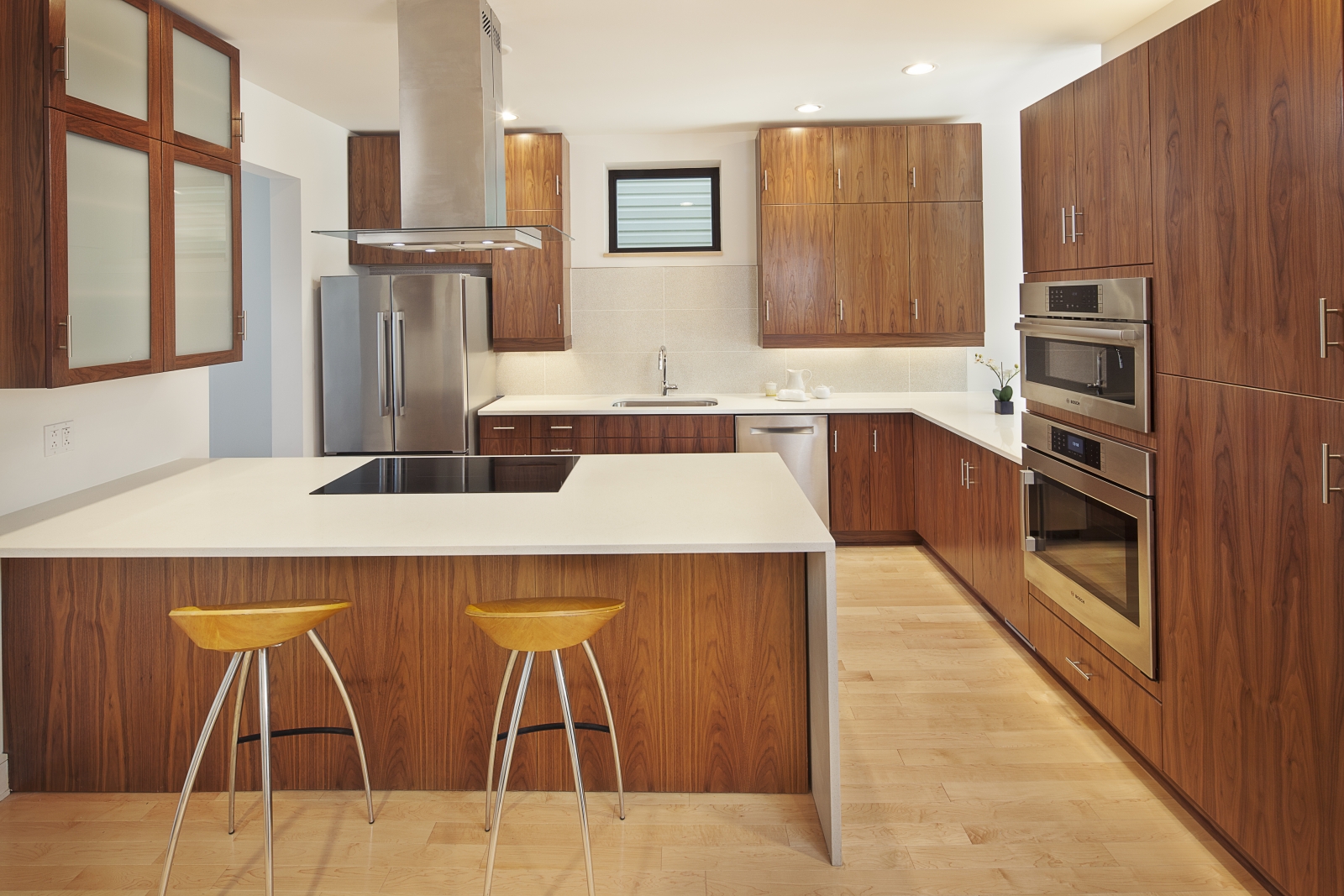 “It’s important to really measure the importance of these buildings,” says Linda Metropulos, ACTION-Housing director of housing and neighborhood development. “The reality is they really need to be evaluated on how they perform over a number of years.”

Thoughtful Balance, which has two certified passive-house consultants on staff, worked with ACTION-Housing on the Heidelberg project. The company has completed four other passive-house jobs in western Pennsylvania and has five in the works.

One such project built to passive-house standards involved retrofitting a 3,000-square-foot, 100-plus-year-old Victorian home in Shadyside. Nettleton bought the home in 2013 as a spec project, intending to convert it to a passive house and resell it. 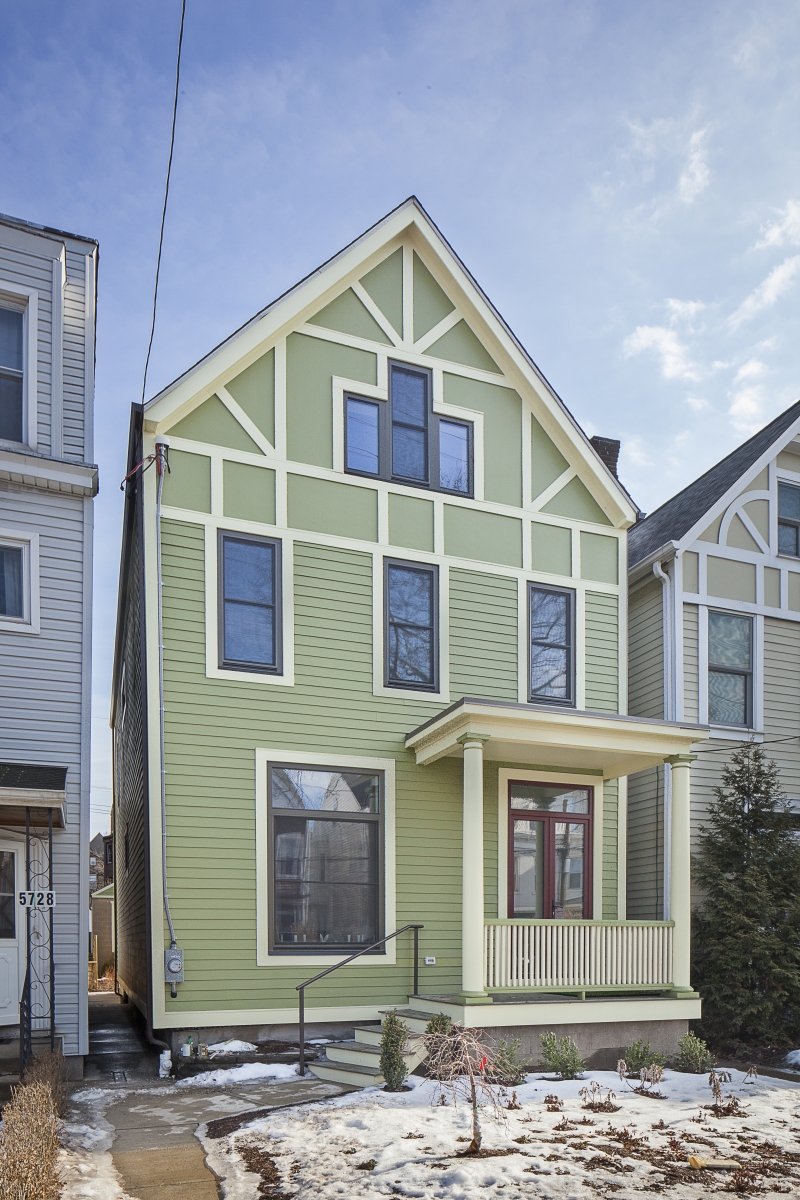 Here’s a look at what’s happening within the Shadyside home built to passive-house standards:

Walls are filled with dense, packed fiberglass.
Four inches of foam provide insulation beneath the basement floor.
All ducts are sealed at the joints to prevent any air leakage.
A high-efficiency heat pump uses less energy than a standard system.
An energy-recovery ventilator swaps stale indoor air with fresh outdoor air.
​Triple-glazed windows are well-insulated.

Today, the house has an air-tight shell and a thick layer of extra “outsulation.” Its walls are filled with dense, packed fiberglass. All of the ducts are sealed at the joints to prevent any air leakage. A high-efficiency heat pump uses less energy than a standard system. An energy-recovery ventilator swaps stale indoor air with fresh outdoor air. European triple-glazed windows allow for maximum energy efficiency.

​Nettleton says adding the passive-house elements cost 10 percent more than a traditional renovation of the property would have required. Based on heating and cooling cost projections, Thoughtful Balance predicts a return on that investment in eight years and a total savings of between $60,000 and $80,000 over the life of a 30-year mortgage.

The home’s current owners, Eva Reitschuler-Cross and Brian Cross, bought the house in summer 2015 after years of searching for their ideal abode. Reitschuler-Cross, a native of Austria, grew up in a community where energy-efficient homes are the norm.

“I walked in and said, ‘Yes!’” Reitschuler-Cross says. “It was like coming home.”

Many of the passive-house elements in the home aren’t noticeable, as most of the work is happening behind the walls. Much more eye-catching are the open, airy layout and modern touches that create a space both minimalist and inviting. The floor plan flows naturally from the sunny dining room in front to the kitchen, which is outfitted with floor-to-ceiling walnut cabinets and a peninsula cooktop. The living room in the back of the house provides access to the deck and backyard. 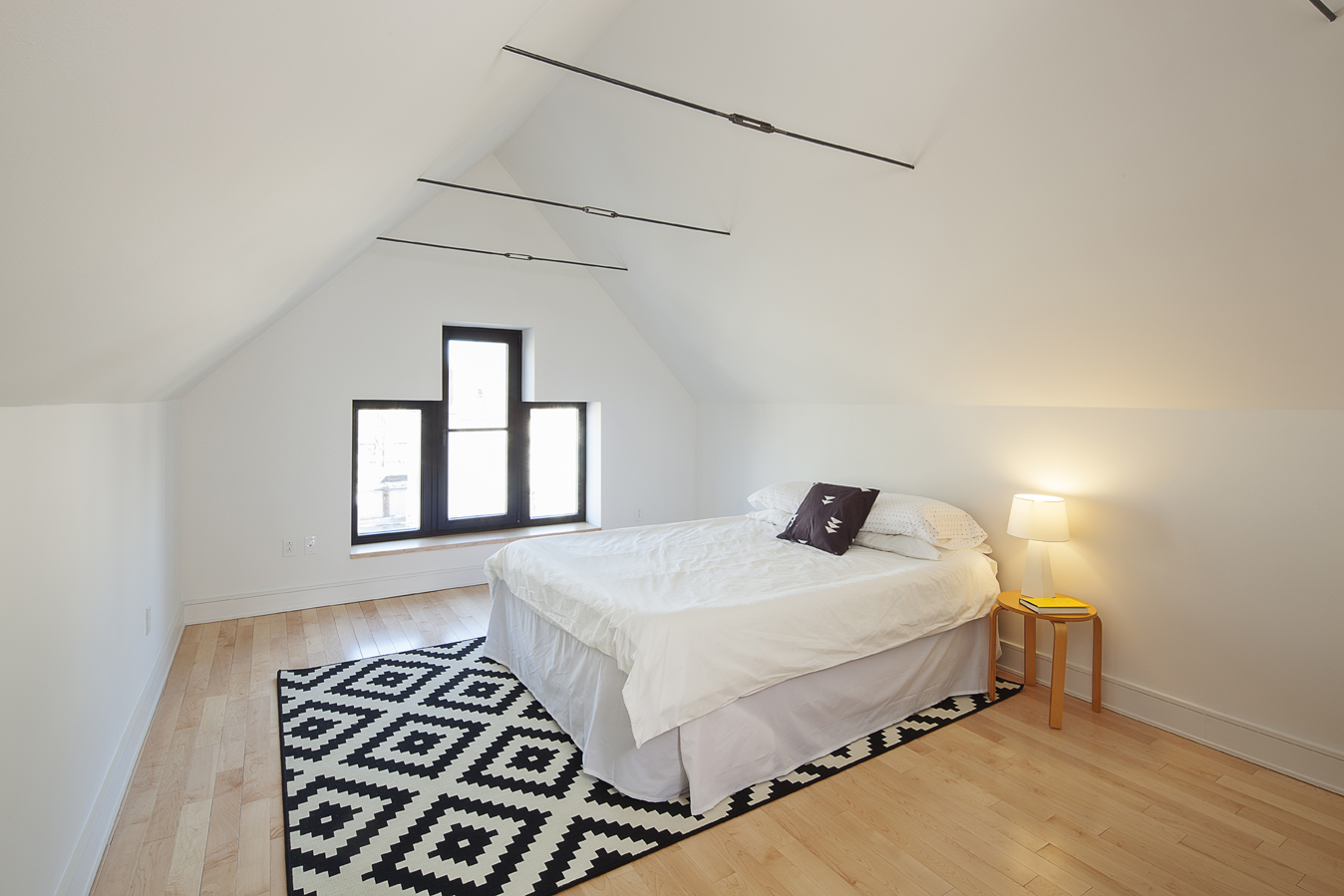 Throughout the space, the ceilings are high, walls are white and floors are maple. There is little to compete with the view of natural elements that are visible through the tall windows and glass doors.

That sense of spaciousness carries through the second and third stories, where minimal furnishings in the bedrooms and office space again let the abundance of natural light remain the focus.

“We wanted something modern,” Reitschuler-Cross says. “We liked the high ceiling, the big windows, the light.”

In the basement, a stamped concrete floor is nowhere near as cold as one would expect because of four inches of extra insulation underfoot. 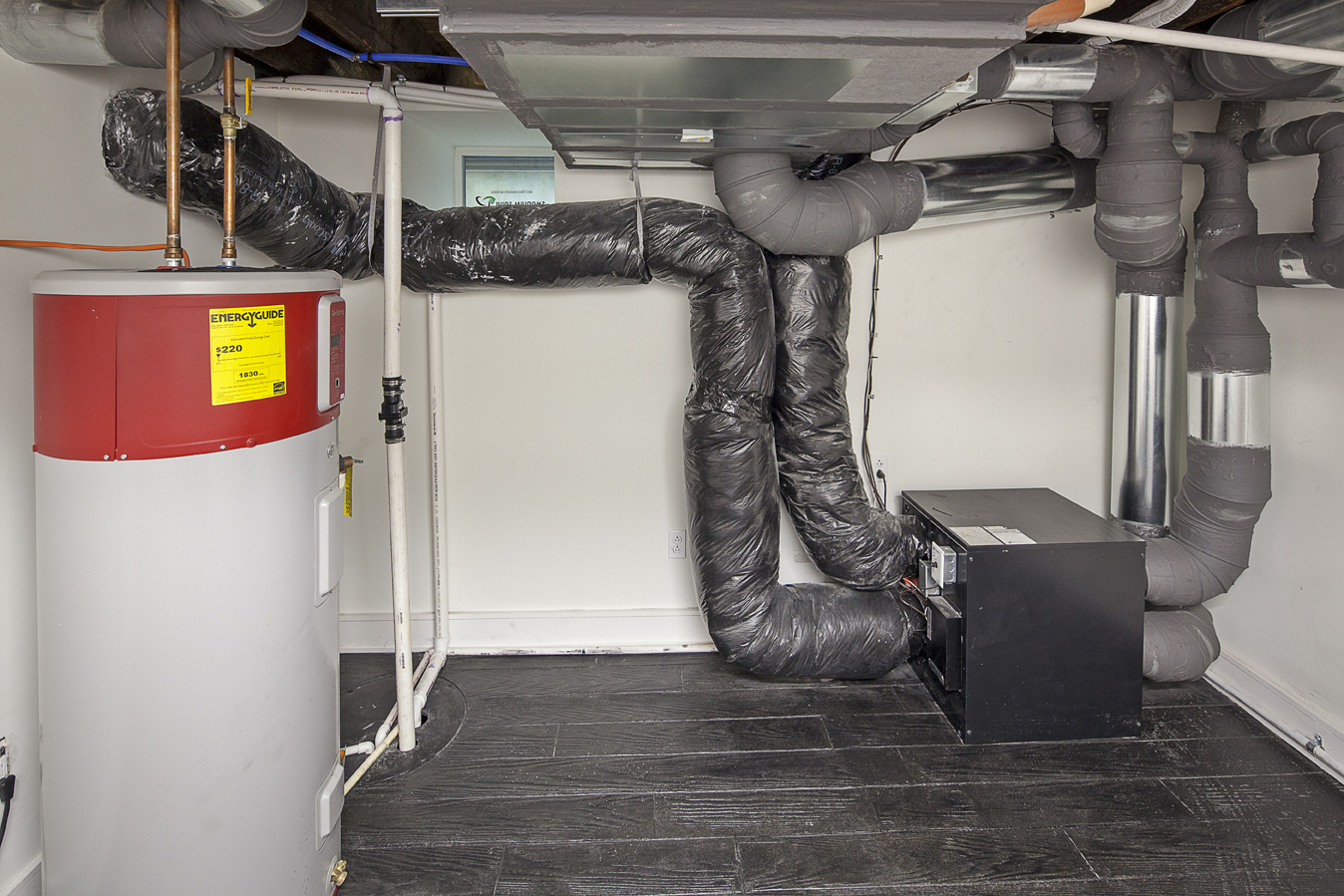 A small corner of the basement houses the mechanics — the HVAC unit, the energy recovery ventilator and the heat-pump water heater.
Climatech, Inc., a Pittsburgh-based heating and cooling company specializing in green, high-efficiency building, installed Mitsubishi electric heat pump systems to heat and cool the home.

“In a typical home, you have leaky windows and air seeping in through old doors that aren’t sealed well,” says Drew Bosetti, residential manager of Climatech. “In this case, there is none of that. We used an energy-recovery ventilator to push stale air out of the house and bring fresh air in, which is reheated and goes into the ducts. The air quality remains pretty high.”

It’s just another benefit for the owners, who say they greatly appreciate the role their home plays in saving energy, money and the planet.

“It feels good to do this,” Reitschuler-Cross says.

Rachel Weaver LaBar is a longtime Pittsburgh-area journalist who has written about everything from school board meetings to Broadway performers. Born and raised in the South Hills, she studied at Point Park University and lives in Pleasant Hills with her husband and their daughter.