Anything but Cold Feet — Married on Ice

Find out how one fun, adventurous couple used their ice-skating roots to inspire a wedding unlike any other.

We’ve heard of weddings in a church, weddings on the beach and weddings at the local parks and farms, but how common is a wedding on ice?

On May 30, 2015, Katelyn “Kate” Metz of Ambridge and Brian Grinnik of Economy got married at Brady’s Run Ice Arena. The wedding was traditional aside from being held in an ice rick, and was followed by a reception at the Fez in Aliquippa. Kurt Bjorklund, pastor at the Orchard Hill Church in Wexford, officiated the wedding.

Kate, an ESL teacher at PA Cyber, is a figure skater, and Brian, who works in Logistics at Westinghouse in Cranberry, is an amateur ice hockey player. They both grew up skating at Brady’s Run. Kate’s mother was a coach there, and taught Brian’s sister how to ice skate when she was younger. “To me, it made sense because we both grew up skating there and still skate today.”

It was just a matter of time until Kate met Brian. Growing up skating at the same rink, attending the same school district and having mutual friends made their meeting seem like fate. When asked what her first impression of Brian was, Kate replied, “I knew he was kind of outdoorsy — that’s what attracted me most.”

They got engaged during Memorial Day weekend in 2014 while camping with their friends and family. “He went all out,” says Kate. “I was shocked.” Kate was downstairs in the cabin that Brian and his father built in West Virginia hanging out with her girlfriends. Little did she know that upstairs, Brian was carrying out his proposal plans.

When Kate came up the stairs and onto the deck, everyone was holding a candle on either side. “I didn’t realize it was for me until I saw that I was the only one not holding a candle,” she laughs. “I Think I Wanna Marry You” by Bruno Mars played in the background, and as the song came to an end, Brian’s parents shifted to reveal Brian down on one knee. Fireworks went off after she said yes, making this Memorial Day weekend one that Kate will never forget. 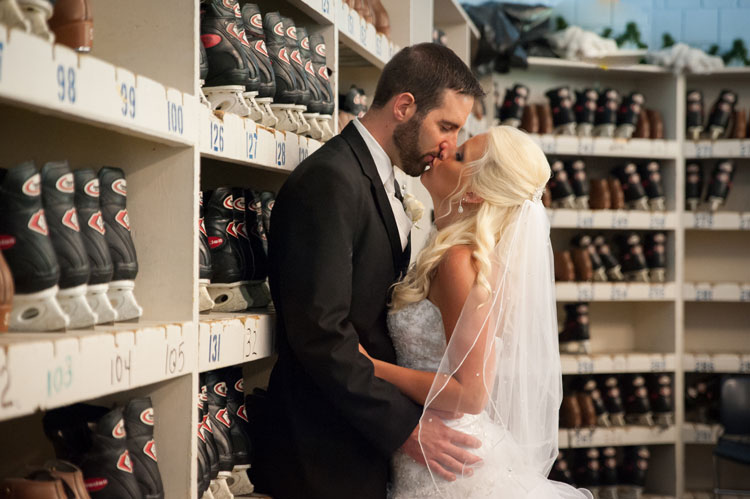 After the proposal, it was show time for the next phase. Kate and Brian decided on their venue, booking it for May 30 because it was the last weekend the rink would be open for the year; when it gets too warm outside, the rink gets foggy. Kate was nervous that the fog would interfere with the wedding, but what little fog did exist added to the elegant and woodsy atmosphere of the wedding.

Kate and Brian decided on a “Twilight”-inspired wedding theme. Kate was drawn to the forest wedding in “Breaking Dawn Part 2,” so she wanted to have trees and candles. She also skated down the aisle to “A Thousand Years” by Christina Perri, played by a live violinist and pianist. She spoke highly of Don Barry, her mother’s skating partner from when they were younger, who helped bring her vision to life by designing and constructing her set. “It was elegant, it was fun,” says Kate. “It just had such a good vibe to it.” 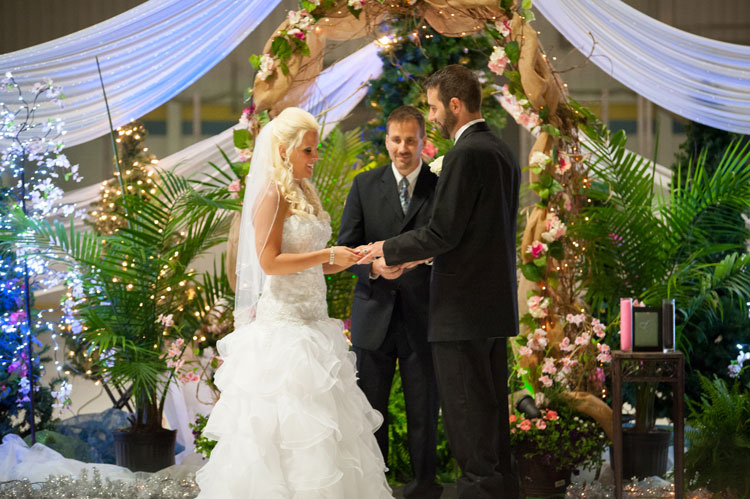 When the guests found out that Kate and Brian had decided to get married on ice, some of them were surprised. “They immediately asked if they had to wear ice skates,” says Kate. Although the guests were not asked to wear skates, they were seated on the ice with carpet beneath them for safety reasons.

Kate and Brian also wore skates, an incredible feat considering Kate wore a long gown. She had the dress hemmed enough so that it would cover her skating boots, and she made sure to practice. Although Kate was prepared, there was a mishap during the wedding. “We wanted to skate around the guests after the wedding, and I almost tripped twice,” she says. Regardless, Kate managed to not fall, and the wedding was a success. 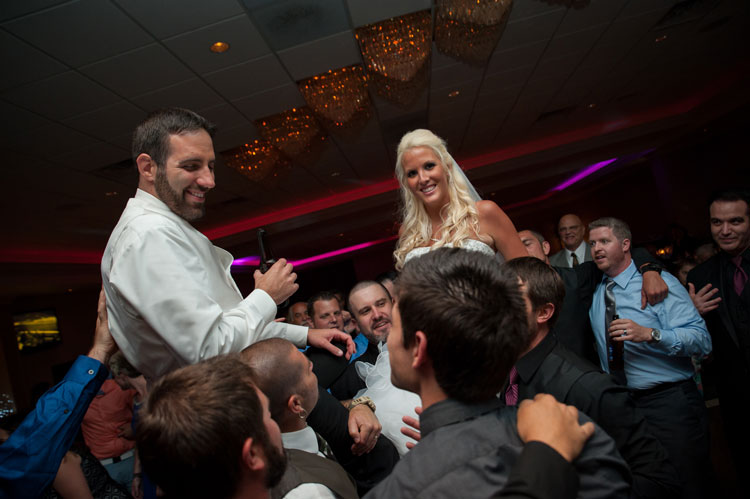 After planning such a unique wedding, Kate has learned a few lessons to pass on to other brides-to-be. She suggests that you need to plan ahead, not do anything last minute and “write things down” to avoid excess stress.

Amanda felt the same way about working with Kate and Brian. “I look forward to all my weddings, but that was my most exciting wedding,” says Amanda. “I think that the whole feeling about it, and the excitement–Brian and Kate, they are an amazing couple together. Very in love and comfortable with each other.”

All in all, Kate couldn’t have asked for a better wedding day. “It was everything that I pictured my wedding to be like and more.” 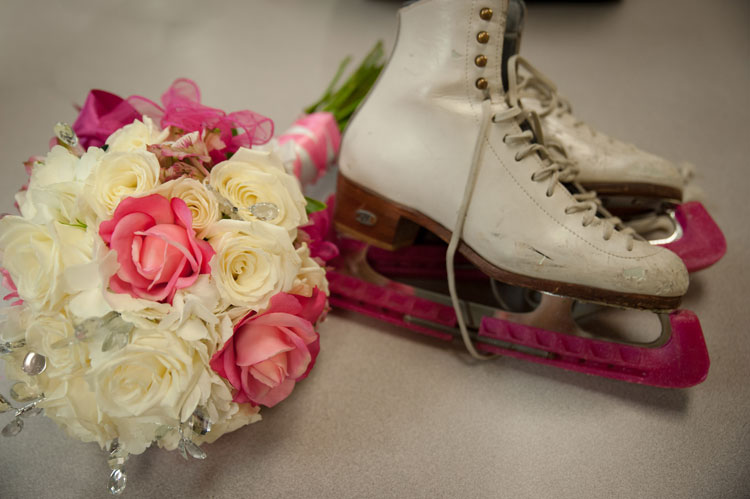