Their love was a match made in cyberspace. Just as information moves at the speed of light on the World Wide Web, so did the relationship of Anna Wukich and Dennis O’Boyle. The two were connected online through Match.com, both driven to the site when the dating scene became too much. Anna, a Ph.D. candidate in English at Duquesne University, and Dennis, in the second-violin section of the Pittsburgh Symphony Orchestra, knew quickly that this was it. For Anna, affirmation that Dennis was "the one" came when he asked her to accompany him to the Vatican to play for Pope John Paul II. After seven months, they moved in together. After only nine months, although there was no conventional engagement, Anna and Dennis knew that it was time and began to plan a wedding. Less than two years after meeting online, they were married in an intimate ceremony at the Morning Glory Inn on the South Side. 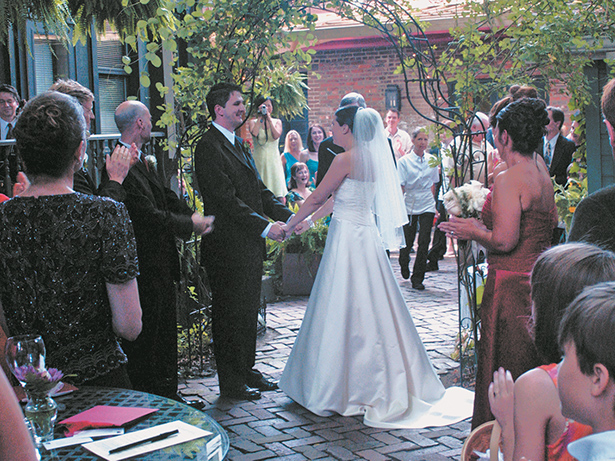 The intimate ceremony, performed by the groom’s uncle, Stephen Miller, and the reception were both held at the Morning Glory Inn on Pittsburgh’s South Side. (412/431-1707, morningglorybedandbreakfast.com)

An extensive menu was provided by A Fare to Remember, including delectable appetizers such as Tuscan potato baskets with artichoke filling and curry coconut chicken with Thai peanut dipping sauce. For the main course, guests dined on chicken, herb-crusted salmon and penne pasta with sides of various vegetables. (A Fare to Remember, Allison Park; 412/487-0200, afaretoremember.net)

The pre-wedding celebrations were catered by Aladdin’s and also held at the Morning Glory Inn. (Aladdin’s Eatery, Squirrel Hill; 412/421-5100, aladdinpittsburgh.com)

The invitations were designed and printed by Signatures in Squirrel Hill, while the envelopments were ordered from mygatsby.com.

The bridal headpiece was custom-designed to match the bead accents of the wedding dress. (Clarissa’s Boutique; 412/432-3299). 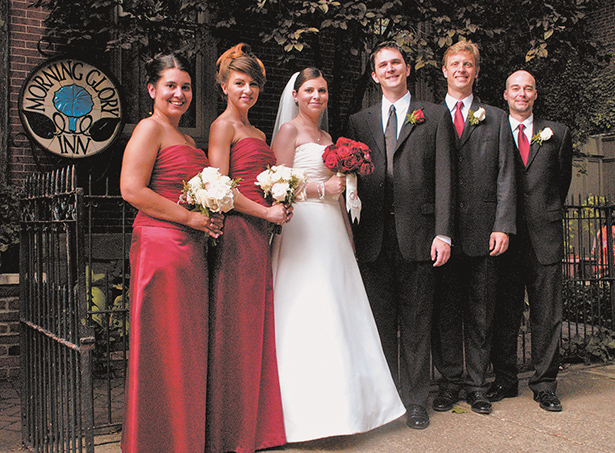 Dark-red chiffon and satin A-line dresses complementing the bride’s dress were worn by the matron and maid of honor (Michael’s Bridal Galleria; 412/366-1811).

The groom and best men wore their own suits.

A cake was designed to match the wedding invitations, consisting of raspberry-and-chocolate-swirl cake alternating with layers of raspberry filling and decorated with white butter-cream frosting and fresh roses (Cakes by Tammy; 724/225-3993, cakesbytammy.com).

The newlyweds spent three weeks in Jackson Hole, Wyo., while the groom played in the Grand Teton Music Festival.

The ceremony music, which was chosen by the groom and his sister Sarah, a member of the New York Philharmonic, was provided by a string quartet comprising friends of the couple from the Pittsburgh Symphony Orchestra.

Anna and Dennis secretly took dance lessons and treated their guests with a surprise rumba to "Fly Me to the Moon" for their first song as husband and wife (Gay Gregg, Dance America; 412/766-8680, danceamericapgh.com). 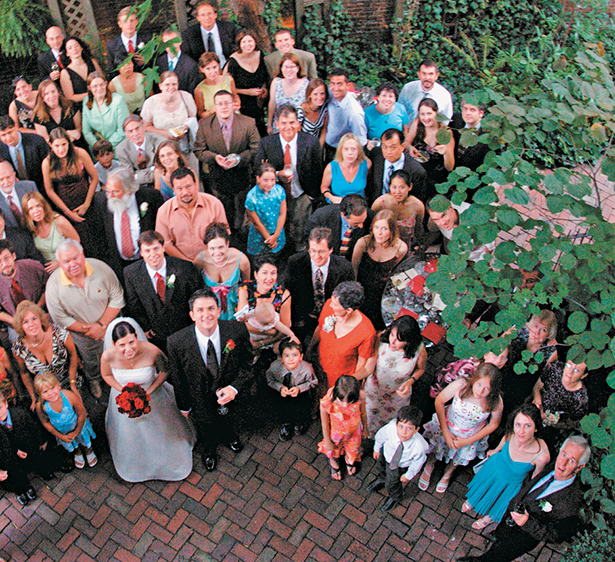 Instead of traditional wedding favors, the couple opted for something more personal. The couple made donations to the Susan G. Komen Breast Cancer Foundation and the Alzheimer’s Association of America in memory of the bride’s grandparents, Mary Jane and Donald Vanecek.

Anna recalls, "The entire day was wonderful because the intimate setting of the inn made us feel like we were surrounded by our guests the whole time, from the ceremony to the end of the reception. One of the best moments was our first dance. We took dance lessons and kept it a secret from everyone, and we had so much fun surprising everyone when we took to the dance floor. Everyone was laughing, cheering and clapping, and it felt great to have such a good time with the people we care about most."

This article appears in the July 2006 issue of Weddings.
Categories: Weddings