Head here for the July 4th Fireworks Blowout to get a picture-perfect vantage point for viewing the EQT Pittsburgh Three Rivers Regatta Flashes of Freedom Fireworks. 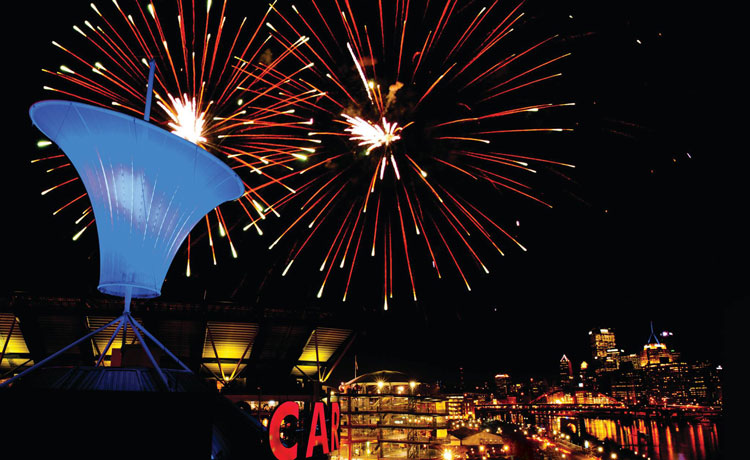 HEAD TO THE CARNEGIE SCIENCE CENTER FOR YOUR BEST FAMILY FOURTH YET
Look, we’re all proud Pittsburghers here, and that means we love fireworks. Send ’em up and we’ll stare at ’em on pretty much any occasion. But let’s be honest: Seeing the annual Independence Day display can be an experience wrought with difficulty. It’s tough to park and harder to get a decent vantage point, and there’s a lot of waiting involved. Or at least that was the case; now, the Carnegie Science Center has solved all those problems in one fell swoop.

Get your family tickets for the science center’s July 4th Fireworks Blowout and you’ll get a remarkable, picture-perfect vantage point for viewing the EQT Pittsburgh Three Rivers Regatta Flashes of Freedom Fireworks. Before and after the explosions, you can check out all the science center has to offer, including complimentary screenings of “Forces of Nature” in the Rangos Omnimax Theater and the “Spirit of America” laser light show. The science center even will throw in popcorn and soda for the show — and parking is included. Short of a private yacht, we can think of no better way to celebrate this Saturday.
(One Allegheny Ave., North Shore; 6-11 p.m.; $39 per person; tickets and more info here)

A BEVY OF FUN ON THE RIVERS (WEATHER PERMITTING)
We know, we know: some doom-and-gloom prognostications have speculated that our region’s current rainforest-like climates of late may hinder the festivities at the 2015 EQT Pittsburgh Three Rivers Regatta. Fortunately, there are plenty of events scheduled for this year’s festivities, many of which will go on regardless of river levels and drizzle. Two words: frisbee dogs. For a rundown on races, concerts, fireworks and more, check out this week’s edition of After Dark!

THE FOURTH IS MORE THAN JUST A DAY AT KENNYWOOD
Want to celebrate your freedom with funnel cakes, roller coasters and fireworks? Kennywood Park’s annual Celebrate America event doesn’t limit the party to the Fourth — the festivity will feature special happenings in the park from now until July 5. Aside from chainsaw carvers, classic cars and ice sculptors, there will be live shows from groups such as Pittsburgh Musical Theater, East Winds Symphonic Band and The Stickers as well as nightly fireworks displays. Kennywood is offering special desserts throughout the weekend, including the cherry-coated square dip cone, tagged with a lofty claim: The park says that the cone is its most popular food item behind Potato Patch fries. Get $10 off your admission with coupons from participating Giant Eagle stores, admission is half-price for active duty and retired military.
(4800 Kennywood Blvd., West Mifflin; click here for more info)

IN THEATERS: Will anyone dethrone T-Rex at the box office this weekend? The top new releases set to take on “Jurassic World” are “Terminator: Genisys,” the fifth film in the robot-apocalypse franchise, and “Magic Mike XXL,” the sequel to the Channing Tatum flick about, uh, “male entertainers.” With regrets to Arnold, the raunchy fun of “Magic Mike XXL” is vastly more enjoyable than the dreary “Genisys,” which gives little reason for pulling the beleaguered Terminator franchise out of mothballs. Of course, “Magic Mike” is very much an adults-only choice for the weekend; families would be wise to grab tickets for Pixar’s “Inside Out.” — S.C.

Another July Four tradition returns this weekend, as the Big Butler Fair opens its gates. Among the featured concerts at this year’s fair: a set from The Clarks tomorrow night, an appearance by Bret Michaels on Wednesday and the annual Y108 Freedom Fest on July 11. — S.C.