The Heinz History Center and The ScareHouse team up for Pittsburgh's first ever "Best Zombie" contest. 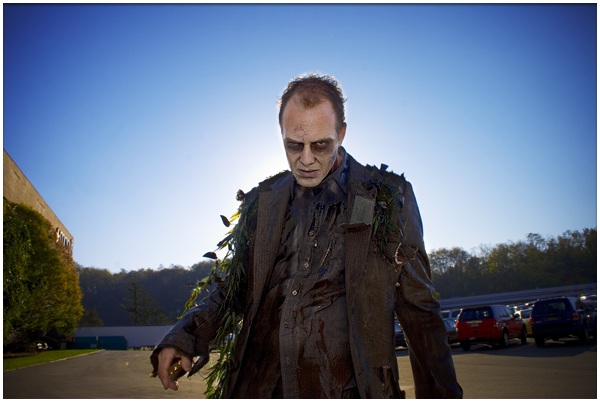 In the course of my duties, I’ve had occasion to cover The ScareHouse (where their make-up artists kindly transformed me into a zombie). I’ve made a few trips to the Sen. John Heinz History Center. And I’ve even slogged out to Evans City to bask in a bit of zombie history at the Night of the Living Dead filming site.

But I did not anticipate the opportunity to combine those topics into one piece. Guess I underestimated the History Center’s ability to put together a ridiculously cool party.

See, NOTLD was filmed way back in ’68 (quick reminder to clear your calendars for all of 2018, as I fully anticipate a year-long, citywide 50th anniversary party; Pirates brass, put a zombie night on the promotions schedule or else.) And the recently-debuted exhibit “1968: The Year That Rocked America” just opened at the History Center, covering the events and impact of that turbulent year; presentations and artifacts range from an intact helicopter used in the Vietnam War and the Mexico City Olympic torch to a full set from “Mr. Rogers’ Neighborhood”, another Pittsburgh production with a ’68 birthdate.

Plus, of course — not too far from Janis Joplin’s bell bottoms — an homage to NOTLD.

So to celebrate, they’ve got a good ol’ fashioned undead bash planned for tomorrow night. (And yes, Pittsburgh is the only city where zombie parties are ol’ fashioned.) That’s where our creepy pals at The ScareHouse come in — starting at 7 p.m., they’ll partner with Lawrenceville dead-chic emporium House of the Dead to host the first-ever “Pittsburgh’s Best Zombie Contest”.

Yes, if you get yourself nice and corpse-y, you could be crowned the Zombie King or Queen of Pittsburgh, a title that carries privileges (a pair of 2013 RIP ScareHouse tickets), goods (swag from House of the Dead) and the unimaginable clout that comes with being named the monarch of the world’s zombie capital. (I assume you can walk right into the AMC studios and tell them how to resolve a few “Walking Dead” plotlines, and maybe spend the night in Monroeville Mall, but I can’t confirm that.)

After undead royalty is anointed — by The Bunny, or so we hope — the original Dead will be screened, complete with popcorn, alcoholic beverages and ’60s-era candy (just to complete that drive-in snack lineup.) Show up early enough, and they’ll even throw in a free docent-led tour of the “1968” exhibit.

So dust off that Halloween costume, call that friend that took a stage makeup class and head to the Strip. You can even hit a bar or two afterwards — this is Pittsburgh. Zombies are expected.

Oh, and early warning — the 15th annual History Uncorked is coming up in early March; the party is always a sellout, and a ’60s theme makes it can’t-miss. Get your tickets now.

Go inside The ScareHouse: