An Intimate Evening of Songs About Murder

In "ANGELMAKERS," nine real-life female serial killers serve as the inspiration for a concert musical. 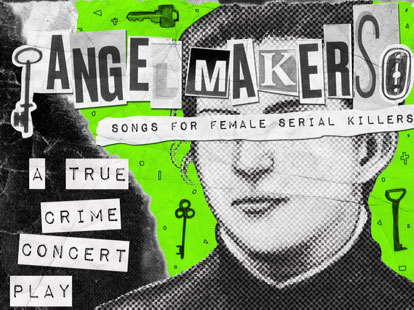 Now that the true-crime genre has reached a level of popularity not seen since the heyday of “Unsolved Mysteries,” it was inevitable that we would eventually see the words “true crime musical” used to describe a theatrical production.

Fortunately, “Angelmakers: Songs for Female Serial Killers” is no dinner-theater hokum, nor is it a theater-of-cruelty thriller. It’s thoughtful, careful, restrained and — surprisingly — beautiful.

“Angelmakers” is a creation of Real/Time Interventions, a company run by Molly Rice (who is credited for the concept of the show along with its music and lyrics) and Rusty Thelin (who directed it). Best known for the rolling 2015 production “SAINTS TOUR,” co-created with Bricolage Production Company, Real/Time has demonstrated an interest in presenting art in remarkable spaces.

That’s absolutely a large part of the appeal with “Angelmakers,” which takes place at the still-under-renovation Aftershock Theater in Lawrenceville. The building dates to 1911, and once boasted a bar in the basement and a “Slovenian polka auditorium,” we were told, on the second floor. “Angelmakers” takes a bare, stripped portion of the grand old building’s first floor and turns it into a memorable and wordlessly evocative place for a performance.

What does that performance look like? A small, uncanny concert. “Angelmakers” consists of nine songs written for — if not always strictly about, in the most literal sense — historical female serial killers, ranging from Countess Elizabeth Báthory to Aileen Wuornos. There’s some background information on each in the show’s program, but none in the performance; aside from one line in the opening moments, singer and lead performer Milia Ayache keeps her explanation to brief dedications (“This one’s for Aileen”) and nothing more.

Undoubtedly, this minimalism will leave some audiences wanting a bit more background; be sure to read the brief biographies in the program before the show begins, or you’ll lack helpful context. The stark nature of the show does enhance Real/Time’s goal, however, as they seem to want to explore the minds behind the crimes and not the sensational details.

It’s an interesting approach, and with less talent at hand, it might not work. Fortunately, there’s talent to spare in this production, starting with Ayache. The Lebanon-based performer is captivating for every moment of “Angelmakers,” singing with dynamic aplomb and embodying the murderers at hand — when appropriate — with sympathy, abandon and even humor. There could be no more ideal lead for this show (and the rest of the small cast, musicians Zorahna and Michele Dunlap, provide perfect accompaniment).

The songs, too, are memorable and varied. These are no bare-bones, open-mic style compositions; representing a range of genres and styles, Rice’s music does cartwheels to accommodate both the depicted killer and the angle of the lyrics. They should put out an album; if they sold CDs in the lobby after the show, audiences would undoubtedly line up for them.

Is there an overarching message — a commentary on crime and criminals? Maybe; you should feel free to draw your own conclusion, there. But that one line of dialogue that opens the show — “Everyone deserves one song” — is the production’s raison d'être. These figures, some depraved, some damaged (and some both), are worthy of understanding — as are we all.

Few of us, however, will be songified in a manner this memorable.