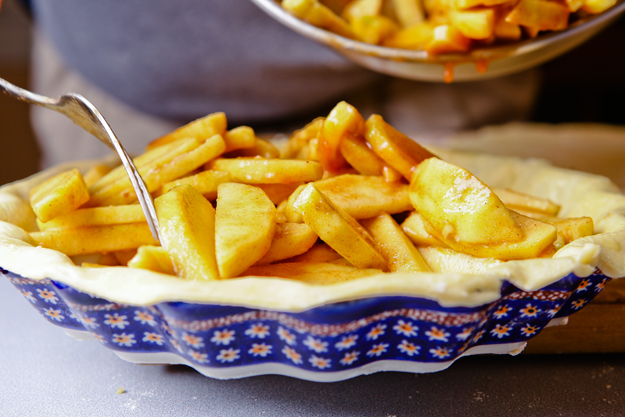 When Don McLean wrote his anthem to popular music in 1971, I was just starting my adventure in public television. I never would’ve guessed that I’d come into the autumn of my career as “that cookin’ guy” on WQED. One of the things I cherish most about this phase has been the chance to recall and share so many of my family recipes with everyone in Pittsburgh.

My Mom and Gram would be pleased to know that their kitchen traditions have made their way into the hearts and homes of many; they were simple women with deep values but few ambitions for themselves. So many of us have someone like that in our lives, and it’d be nice to show them how much we appreciate them by baking them an apple pie.

This recipe comes from my Mom, who let me stir the apples with a mixture of brown sugar, cinnamon and lemon.  Bye, Bye, Miss American Pie.

Mix together the flour and salt. Cut the shortening into the mixture with a pastry blender. Add the ice water one tablespoon at a time until the dough forms a ball.

Separate the dough into two pieces. Press each piece into a disk, cover with plastic wrap and refrigerate for at least 20 minutes.

Peel and core the apples. Cut them into one-quarter inch slices, and toss them in a large bowl with the sugars, lemon juice, corn starch, cinnamon, nutmeg and salt. Let the juices form while you preheat the oven to 425 degrees.

Roll out the bottom crust. Place it in a 9-inch pie pan and trim to the edge of the pan. Mound the apple mixture in the pan and dot with butter. Roll out the top crust. Moisten the edge of the bottom crust with a little water and then lay the top crust over the apples. Trim to leave a 1-inch overhang. Fold the top crust under the bottom. Crimp and flute with your fingers to make a good seal. Cut a few slits in the top to allow steam to escape. For a pretty finish, brush the top with cream or milk and sprinkle with sugar. Place the pie on a baking sheet (to catch any spillover) and place in the oven. After 15 minutes, lower the heat to 375 degrees and continue baking for 45-60 minutes, or until the pie has bubbled for 15 minutes and the crust is golden. If the outer edges are browning too quickly, cover them with a pie shield. Cool on a wire rack.

Chris Fennimore is the director of programming at WQED and the producer/host for QED Cooks.  Follow his blog on food and family at wqed.org/tv/cooks/chrischat.

This article appears in the December 2011 issue of Pittsburgh Magazine.