Among Pittsburgh Bars, Some Hidden Gems

When it comes to bars, the hidden gems are either off the beaten path, in a neighborhood not known for nightlife or otherwise isolated from our normal nocturnal routes. 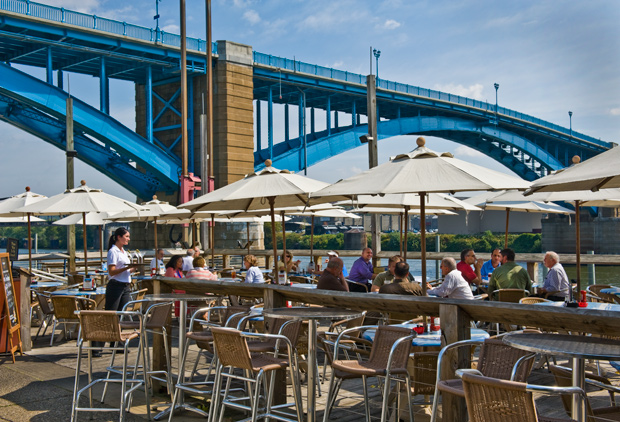 The outdoor deck at Redfin Blues with the 31st Street Bridge in the background.

While wearing one of my other hats—the movie-critic hat, which is simultaneously pretentious and nerdy—I frequently get annoyed with the concept of genre. Most films, after all, do not fit neatly into drama, comedy, horror or romance. Those clearly defined lines went out with silent films. I recently found myself describing The Adjustment Bureau as a scifi-action political thriller/romance … with jokes. What I’m saying is that movies can be complicated.

The same holds true for bars. Your local watering hole is many things to many people; you can’t pigeonhole it. The hot new bars-n-restaurants iPhone app, creatively titled “Where,” lists bar categories like Pubs (too vague), Date Spots (everywhere is a date spot to someone), Cabarets (no longer exist), and After Work (so any bar that’s open after you stop working, then.)

Like all psuedo-intellectual-faux-academian-peddlers-of-opinion, I hate labels. And yet, I’m about to toss another one at you.

This week, I’m recommending four hidden gems. Places you probably wouldn’t stumble upon on your own; places that have to be recommend to you by a buddy (or, less impressively, by an app).

What are your hidden gems? I’m looking for places I’ve never heard of (preferably in neighborhoods I’ve never been to) to try out. Please let me know a few of your favorites in the comments.

Pub in the Park

This inviting pub, tucked well out of the way in a Swisshelm Park neighborhood, has instantly become one of my favorites. It’s a true Irish pub, and they know their stuff—they’ll cheerfully say “Slainte” when they’re handing you a drink, and they can pour a Guinness just right (a true rarity outside of Ireland). They are absolutely not averse to a good time with live bands, karaoke, special parties for big sports events (easily visible on 10 new TVs,) trivia and more surprises—be sure to get on their e-mail list for the full rundown. There’s a dart room in the back. There are bartenders that will know you by name on your second visit. And the last time I was there, they gave me a couple of barbecue ham sandwiches for no apparent reason. This pub is home. (7034 Blackhawk St., Swisshelm Park. Mon., 11 a.m.-1 a.m.; Tues.-Sat., 11 a.m.-2 a.m.; Sun., noon-midnight. Info: 412/241-9242, pubintheparkpgh.com)

Most have heard of Redfin Blues, though few have ventured to Washington’s Landing just to try it. By virtue of being literally the only public establishment in Pittsburgh’s most isolated neighborhood, it’s instantly hidden in plain sight. But if you haven’t crossed the 31st Street Bridge lately, Redfin Blues should be your excuse. With all due respect to Sandcastle, this is the only place in Pittsburgh where you can honestly convince yourself that you’re at a seaside resort. Eat heartily, drink merrily, take a stroll around the island, come back and do it again. Contemplate how long you’ll have to save to afford a Washington’s Landing townhouse—this gem opens on April 1. (100 Waterfront Drive, Washington’s Landing. Opens April 1. Sun.-Tues., 11:30 a.m-10 p.m.; Wed.-Thurs., 11:30 a.m -11 p.m.; Fri.Sat., 11:30 a.m.-midnight. Info: 412/322-5837, redfinblues.com)

A riverside bar in Avalon, The Rusty Dory is a haven for the fine residents of sadly dry neighboring township Bellevue. It’s also a ridiculously good time with regular features like Friday Night Karaoke, Tarot Card Readings (with “The Good Witch of Avalon”) two nights a week, Wednesday Night Wii Sports and Wing Specials, and a mean menu to boot. It’s also Irish themed—like most of this list, come to think of it—and boasts many sprawling nooks and corners to waste a night in. Everyone at The Rusty Dory has a story, and many of them will share it with you, whether you’re interested or not. But, hey—if any inebriated conversationalists are oversharing, you can always try to spook them with a ghost story; The Rusty Dory is happy to flaunt its reputation as a haunted pub: Three regular spirits hang around most nights.(850 Ohio River Blvd, Avalon. Info: 412/761-1258)

After about six months of voting, Monterey Pub has emerged as the winner of a PM poll asking for the favorite among my Hot Bars selections, so clearly it’s a popular joint. I remain convinced, however, that a great many have not discovered this dimly lit den, owing to its somewhat remote location in the Mexican War Streets. Some are still tentative about the North Side, after all, in spite of the fact that Monterey is halfway between a bird museum and a modern art gallery—not exactly an area to be petrified of anymore. If you haven’t been to Monterey, you’re missing out on a great little joint that boasts the right combination of atmosphere, beer and mind-blowing food. Drop the kids off at the Aviary and grab a pint. (1227 Monterey St., North Side. Mon.,-Thurs., 3 p.m.-midnight; Fri.-Sat., 3 p.m.-1 a.m. Info: 412/322-6535, montereypub.com)

This article appears in the March 2011 issue of After Dark.
Categories: After Dark