A look at some of the most infamous controversies in Pittsburgh history. 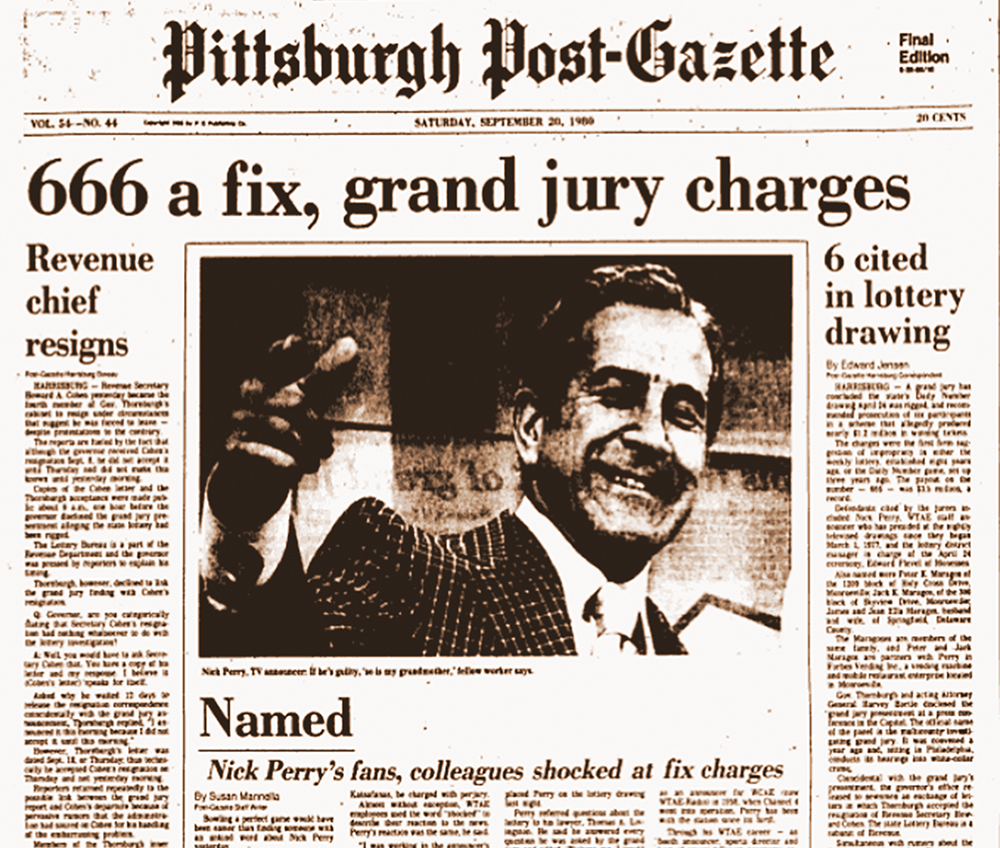 Our city’s past is full of interesting twists and turns, including a number of scandals. But is Pittsburgh on par with the number of misdeeds in other metropolises? And when scandal sizzles up, how well do we handle it? We asked Bob O’Gara, a local public-relations pro and veteran of crisis management, to weigh in on some of our region’s most notorious tales from the past four decades.

People tend to think of politics as scandal central, and Pittsburgh has seen a number of elected officials go down in flames. But our area hasn’t had a top-shelf governmental scandal like the 1990 bust of Washington, D.C., Mayor Marion Barry for cocaine possession or the 2008 demise of New York Gov. Eliot Spitzer over his relationships with prostitutes.

“I think we have maybe an old-fashioned moral tone,” says Bob O’Gara, who has taught the art of crisis management at Point Park University for 20 years. “We tend to have people who are doing the right thing … most of the time,” and our civic health may benefit from the fact that Pittsburghers “don’t mind telling anybody that they’re full of something.”

Political Capital
Last year, there was continued fallout from a years-long series of prosecutions of state legislators and others who steered public resources into their campaigns. Former top House Democrats Bill DeWeese of Greene County and Mike Veon of Beaver County are now residing in state prisons. Veon was directing state grants to political pals, and steering public funds to relatives and friends. He and DeWeese were involved in a wide-ranging system of compelling staff members to perform political work on state time, and awarding them bonuses related to their volunteer work on campaigns.

Such misdeeds even have a Pittsburgh-inspired moniker in Pennsylvania political circles — “Habay crimes” (named after former state Rep. Jeff Habay of Shaler, who in 2007 pleaded no contest to charges related to the use of legislative staff in re-election bids).

Melani's Mistress
It was around this time last year when we got a look at a once-in-a-lifetime police report. It described a pillar of the business community, Highmark’s then-CEO Kenneth Melani, fighting with the husband of his co-worker/mistress. The report even contained a heart-rending personal question that Melani posed to the responding officer: “He asked me in an emotional voice if I had ever had a relationship that was everything to me, and I declined to discuss that with him,” the officer wrote.

Downtown-based insurer Highmark sacked Melani. In court, he agreed to anger-management counseling and headed down a path toward expungement of charges. Melani has gradually shed his other civic roles while drifting off of the radar. But was it a true scandal?

“Anything that has a sexual overtone to it is scandal — and anything that involves a police incident,” says O’Gara.

Pittsburgh’s business community, he notes, hasn’t been a hotbed of scandal but has sometimes botched its response to bad news. “There tends to be a cautious attitude: ‘Let’s not start talking and being open with this thing until we know exactly what’s going on.’” But too much reticence can backfire.

“You say the words, ‘No comment,’ and you’re guilty as hell” in the public eye, he says. His mantra: “OK, we’re going to be open with you; we’re going to tell you what went wrong.”

Sister Act
Former state Sen. Jane Orie, a McCandless Republican, was accused of theft of services and conspiracy. She fought prosecutors to a draw at her first trial, only to be undone by an accusation that she forged a key piece of evidence. She was forced to resign in May and is now serving a prison term.

Jane and Joan had championed reform; when indicted for enlisting staff in their campaigns, they accused Allegheny County District Attorney Stephen A. Zappala Jr. of coming after them because they had opposed his family’s political and gambling interests — a story line Zappala hotly denied.

(Very) Part-Time M.B.A.
In 2008, West Virginia University quietly closed the book on another long-running story that went straight to the top of corporate Pittsburgh: the school’s falsification in 2007 of academic records to award an M.B.A. degree to Heather Bresch, the daughter of U.S. Sen. (and former Governor of West Virginia) Joe Manchin.

The news sent heads rolling at WVU, and prompted lawsuits by current and former staffers who said they were compelled to award unearned credits but were later blamed for it. However, the story didn’t trip up the recipient of the since-rescinded degree: Bresch has risen from president to CEO of locally based drug maker Mylan, Inc.

It’s only natural that the cloud hangs over Morgantown and not Cecil, says O’Gara. Awarding unearned credits is “basically a huge breaking of the rules. In higher education, you’ve got very, very strict grading and record keeping.

“It’s a huge black mark on WVU’s reputation,” he says, at a time when the university should be touting the quality that you find there when you “get past the partying and the burning of couches.”

Flying Kites
Michael P. Carlow, an Upper St. Clair financier whose checkered resume includes the collapses of candy maker D.L. Clark Co. and Pittsburgh Brewing, was first convicted and imprisoned in 1996 for tax fraud related to a $31 million check-kiting scheme. He wrote checks from various accounts to each other, using the check float time to create the appearance of wealth.

As a defendant in a new federal case, he has pleaded not guilty to accusations that he avoided payments due to the IRS by putting assets in the hands of his longtime companion, Elizabeth Jones. (She’s also a defendant and has pleaded guilty to conspiracy.)

Motions in the case have focused as much on relationships as they have on revenue.

U.S. Attorney David J. Hickton’s office opposed a request that Carlow and Jones be allowed to travel together to North Carolina to celebrate a granddaughter’s birthday. Soon after, Carlow accused Hickton’s office of hiring an attorney who had previously been at the table for at least one of his defense strategy sessions. Hickton then turned the prosecution over to Washington-based Justice Department attorneys.  In January, Michael Carlow pleaded guilty to impeding the administration of tax laws.

According to O’Gara, this has the makings of a good scandal. “There’s check kiting, which is a real sort of flim-flam thing to do, but he had a girlfriend involved, too,” he says. In still-chivalrous Pittsburgh, O’Gara says, dragging your better half into your shady dealings is scandalous.

The '666' Fix
Can a fallen icon recover? One classic Pittsburgh scandal suggests that it’s possible: Local TV newsman Nick Perry, who came to host “Bowling for Dollars” and the nightly Daily Number drawing, had a rare combination of credibility and charm. But on April 24, 1980, the lottery came up “666.” Investigators discovered that latex paint had been injected into all balls not marked four or six, and concluded that the resulting increased weight had caused the unusual result. Signs pointed to Perry and a collection of co-conspirators.

A jury found Perry guilty of masterminding the rigged drawing. From prison and post-release, Perry proclaimed his innocence. He got work with a medical lab and then a bowling supply company prior to his death in 2003.
“Society can forgive, and people can correct bad habits,” says O’Gara.

Bad News Pirates
Good behavior can help. But it’s tougher to erase scandal through relentless mediocrity — though it can be done, over time. The Pittsburgh Pirates brand took a hit in the mid-1980s when, just a few years after the team won the 1979 World Series while everyone danced to “We Are Family,” it became Exhibit A for cocaine in baseball. None other than the Pirate Parrot served as a powder-pushing mascot. The matter touched all of the bases of scandal.

Nearly 30 years later, that memory has been all but buried under a record-smashing losing-season streak and a series of unprecedented late-summer swoons.

Boss Politics
Former Allegheny County Sheriff Pete DeFazio pleaded guilty in November 2006 to charges that he coerced deputies to contribute to his campaigns. That “probably didn’t surprise a lot of people,” says O’Gara. “That’s more an example of boss politics” where officials “bend things their way to stay in office,” he explains, rather than full-blown scandal.

Former Pittsburgh Councilwoman Twanda Carlisle went to jail for steering city money to friends through bogus consulting contracts, and then having them put a piece of the action into her personal and campaign accounts.

This is starting to add up. Can a region reach a critical mass of garden-variety peccadilloes that, in sum, is scandalous? “Some of these things would never have happened unless people thought, It’s the system, and this will never come to light,” says O’Gara. “What were they thinking? How did they think they could get away with this?”

This article appears in the March 2013 issue of Pittsburgh Magazine.
Categories: Community Feature, From the Magazine