All the Write Moves 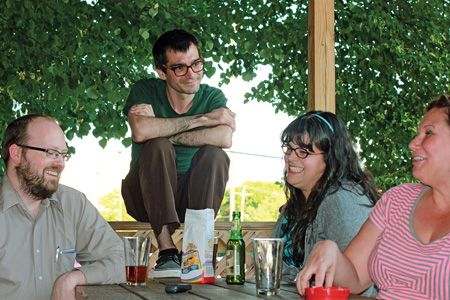 It’s a warm summer’s eve in Bloomfield, and the traffic on Liberty Avenue is sparse. Most of the Happy Hour crowd is gathered in the establishments closer to the bridge. Down at the other end of the neighborhood, things are quiet. In Lou’s Little Corner Bar, a few regulars sip beers and watch the Pirates on the tube. But on the outdoor patio, a celebration’s under way: The New Yinzer is turning 10 years old, and that merits some well-earned revelry.

A decade ago, writers Jennifer Meccariello Layman and Dave Madden dreamed up the online journal to provide publishing opportunities for local writers. “We and our writer and artist friends didn’t have a local option in which to publish more literary forms of writing — fiction, essays and poetry,” says Meccariello Layman, who now works at Carnegie Mellon. “Dave and I were interested in exploring that new-fangled Web publishing thing all the kids were talking about.”

The editorial flexibility of online publishing — along with its relatively small expense — enabled the pair to hit the ground running, quickly establishing The New Yinzer as part of a vibrant, growing literary scene. After nearly four years of publishing, however, the founders chose to move on.
Word that Meccariello Layman was looking for a successor eventually made its way to writers Scott Silsbe and Ellie Gumlock, who jumped at the chance to blow the dust off the then-dormant magazine. In September 2006, the journal had officially returned, reinvigorated.
Since then, managing editor Silsbe and an ever-rotating volunteer staff of enthusiastic literary provacateurs (including co-conspirators Paulette Poullet, Mark Mangini, Holly Coleman, Taylor Grieshober and Celine Roberts) have published the magazine three times annually — with expanded content that now includes features on music and film, comics and an art section.

The staff also schedules rock shows and reading events throughout the year (more on that later). Silsbe calls The New Yinzer “a labor of love.” Everyone, he says, shares a passion for art, literature, music — and, most of all, the Steel City. Even the contributing staff credits Pittsburgh as a main source of inspiration.

“Pittsburgh harbors a lot of creativity,” says cartoonist Poullet, who currently handles the site design and illustration of TNY’s art section. “Part of what attracted me to the city is its aesthetics, born from blue-collar toil, with houses that seem like palaces.”
And that inspiration makes things easier on the staff. As TNY art co-editor Roberts points out, “I think we all try to foster a feeling of Steel City community and translate that through the magazine.”

The door is always open at The New Yinzer; anyone interested in getting involved, whether submitting work to the magazine or reading at an event, is encouraged to do so. “It’s a very comfortable setting,” says Coleman, co-presenter and emcee for the “TNY Presents …” reading series. “A lot of people who do readings and submit work have never done it before.”

It’s the influx of new people with fresh ideas that keep The New Yinzer interesting. “It’s nice to have a breadth of artists,” adds Poullet. “We have a wide spectrum of contributors — from students to published authors.  All sorts of perspectives are presented and exposed.”
Silsbe agrees. “Working on the magazine is a discovery process,” he says. “I’m always finding new writers and new bands to have at events.” This joy of the new is palpable in the magazine as well as at TNY events. More than anything else, it’s apparent that folks involved with the publication truly love what they do.

So, after 10 long years, the question is: How long can TNY continue? Well, for as long as people want to get involved. “It’s exciting not knowing what the future holds,” says Silsbe.

The New Yinzer isn’t just a literary journal. The staff loves to throw a good party, one where everybody is invited, three or four times per year at Brillobox; at the rock ‘n roll bashes, such fine local noisemakers as Karl Hendricks, Ash Dinosaur and Moldies & Monsters have rocked the hip watering hole.  Looking for a quieter good time? Swing by one of the “TNY Presents …” reading engagements for a bit of live lit. Held monthly at ModernFormations Gallery, the series offers a little something for everyone; some of the city’s finest local writers (veterans and newbies alike), as well as touring authors from all over the country, have made “TNY Presents …” events can’t-miss engagements for those who love the written word.

Catch some TNYers (and guests) in action at the next “TNY Presents …” event: Sept. 20, ModernFormations Gallery,4919 Penn Ave., Bloomfield; tnypresents.blogspot.com