All Screen for Ice Cream: Uber is Delivering Treats On-Demand 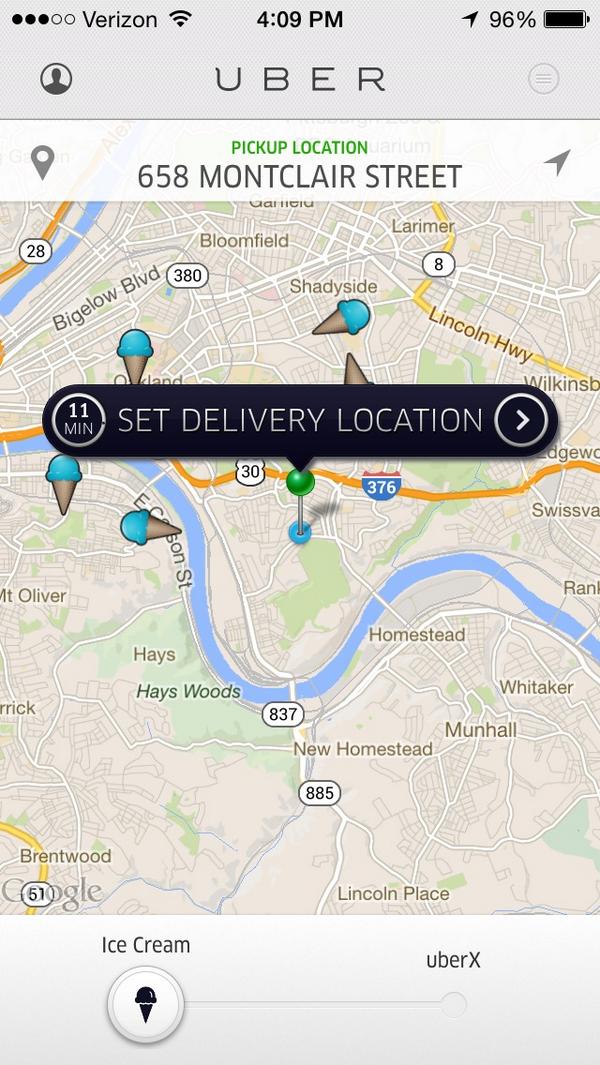 It’s Friday. We get it. The last few hours of the workweek have been painstakingly long. The only thing on your mind is the solitude of your home and the imprint of your couch cushion. You have glanced at the clock on the wall — who knows how many times — and five minutes feels like five hours. Resistance is futile.

Uber understands your suffering, and deservedly so, is treating its app users with a frozen surprise. Until 5 p.m., the ride-share organization will be selling ice cream. For $25, buyers can pick five treats of their choosing — from cones to ice cream sandwiches.

All you have to do is download the app, select the “ice cream” option on the menu and hit request. Screaming for ice cream? Now that’s just outdated. Complete your Friday the right way by divulging into a frozen avarice.


Since his election earlier this year, Mayor Bill Peduto has entertained plans for perfecting the Steel City. Between conducting a Q & A on Reddit and announcing that he’ll dedicate one day each month for marrying same-sex couples, Peduto let loose on Wednesday with Ya Jagoff blogger John Chamberlin, one of our Best of the 'Burgh honorees.

The two sat down in the Mayor’s office for an exclusive (and entirely random) interview, check out the clip here. The conversation jumps from the mayor’s childhood to a brief trivia about the Hokey Pokey, a western Pennsylvania standard (for better or worse).


At 2 years old, Abby McGowan knows her alphabet. She can count. And she can recite the names and numbers of several Pirates players.!

In a clip posted by WTAE-TV, the Canonsburg toddler performs spirited chants and even recalls who hit a home run during last game.


The model Pittsburgh steelworker is defined by a series of characteristics and stereotypes. Steelworkers long have been viewed as the grit and ruggedness behind the Steel City; you won’t find a stronger dialect of Pittsburghese outside the bowels of the steel mills.

The Steelers’ mascot pays homage to those who built the city. Too bad the team didn’t take into account that a giant, human-like mascot carrying around a steel beam might send off the wrong message.

In a list of the New York Post’s 12 creepiest mascots, Steely McBeam comes in at No. 10, beating out Jack in the Box and the Stanford University Tree.

Hey, that’s fine. But no other city can say that they are home to a pierogi mascot race.