What began as a nerdy obsession with film turned into a career for Greg Nicotero, executive producer of AMC’s hit series “The Walking Dead.”

As a kid growing up in the ’70s in Pittsburgh’s northern suburbs, Greg Nicotero, 50, began making movies with Super 8 millimeter film and original video cameras. His mom and dad were cineastes, and his uncle Sam had made a living as an actor in Pittsburgh and Los Angeles.

A graduate of Sewickley Academy, Nicotero studied pre-med at Westminster College but later changed his mind about a medical career, thanks to film great George Romero, who employed him on the set of Day of the Dead.

Nicotero took a break between appearing at San Diego’s Comic-Con and handling responsibilities related to “The Walking Dead,” a TV show he’s been involved with since its debut in October 2010, to talk about his experiences and connections to the Steel City.

When did you first become interested in special makeup effects for film?
When I was [younger], I used to ride the bus downtown with a good friend or sometimes go with my parents, who were huge film buffs themselves, to see movies at the Gateway and Warner theaters. I remember going to see Alien, Jaws, Dawn of the Dead and Planet of the Apes. Those films, along with my uncle’s collection of Famous Monsters magazines and grandfather’s Super 8 collection of monster movies, really helped to shape a fertile time in my imagination and pique my growing interest in film and special effects.

Did you make your own movies growing up?
[In addition to] my dad being a huge film buff, he was kind of a gadget guy, too. So we had one of the very first video cameras and a reel-to-reel video tape player. My two brothers and my friends [and I would] make movies based on movies that inspired us — such as Logan’s Run, Jaws and Dawn of the Dead. My buddy and I even made the front half of a shark out of chicken wire and a sort of papier mâché; I think we filmed one scene with it in my parents’ pool before it fell apart. (laughs) We also made fake squibs and emulated gunshots on a wall — all of it very experimental and fun. But, you know, that was how I started to learn what worked and what didn’t when it came to special effects.

How did you get into the business?
It was really through a chance meeting [with] George Romero while I was in Italy vacationing with my parents. Of course, I knew who he was — [he’d been] on a late-Saturday night, locally produced horror TV show called “Chiller Theatre.” We were in a restaurant, and he was sitting at the next table. So I went up to him and said, “You know my uncle Sam. He was in one of your movies.” That introduction began a lifelong friendship that then led me to meet Tom Savini on the set of George’s film Creepshow. George offered me a job on the film, but I turned it down because I was heading off to college.

Fortunately, a few years later in 1984, George once again offered me a job to work on Day of the Dead. This time, I jumped at the chance [as well as] the opportunity to work for Tom Savini, who was in charge of special makeup effects. So I had to drive home and tell my parents I was taking a semester off from school. They were great about it. Looking back, I think they saw something in me that probably told them this is what I could potentially be destined to do. 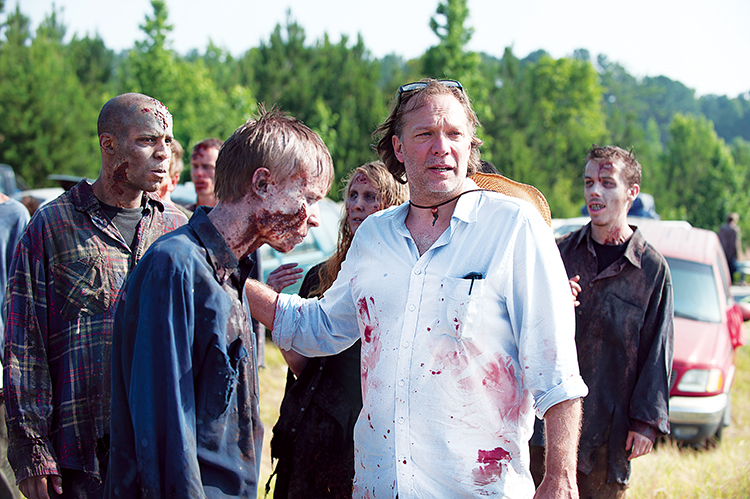 Aside from “The Walking Dead,” what’s the most memorable project you’ve worked on?
Admittedly, I’ve had the greatest film-school experience without going to film school. I’ve had a chance to work on a number of films with fantastic directors — including Pulp Fiction and Inglourious Basterds with Quentin Tarantino, Transformers with Michael Bay, Sin City with Robert Rodriguez, and The Green Mile with Frank Darabont. I’ve been very fortunate to take amazing experiences from each project.

I’m a huge history buff; [I lived] in Berlin for four months while shooting Inglourious Basterds and [watched] Tarantino direct while working with his actors. He so loves the characters he [creates], and I think that’s why I’ve been successful on “The Walking Dead.” I learned a lot from him and other directors like him. By watching great directors I’ve worked with, I’ve learned what’s important and how to bring forth a successful on-screen performance. I love that aspect of what I do.

What’s challenging about working on a series like “The Walking Dead” versus a feature film?
“WD” gives us the opportunity to tell great stories and develop characters in a way that you can’t in a two-hour film. And that’s an important element about the show. Yes, it’s a horror story and there are zombies involved, but it’s also a story about people — their struggles, their desires, the moments when the horror of their situation allows us to focus on who they are and how they’re reacting. It also gives [us] a chance to go back each season and refine what [we] know and learned, and make it look better. Any artist would jump at the opportunity to be able to do that; we’re able to make [the show] better each year because of that ability to fine-tune it. Four years [after the show’s debut], I know these characters and these storylines better in a way that allows me to do both jobs — producer and director — with greater understanding and focus each successive year.

What do you miss most about Pittsburgh?
I really love Pittsburgh. I’d love to come back and shoot some movies there. The people are passionate, dedicated and creative. I mean, I ended up in the film business because of two guys in Pittsburgh. It [remains] a great place for me because it was there that I stretched my creative muscles. And I love the Steelers; I watch every game. And can you believe how great the Pirates have been this season?! A.J. Burnett actually visited [the] set with about eight other Pirate players last spring, and Hines Ward played a zombie [last season]. It was really great to meet all those guys and hang out.

What would you like to do next in your career?
I would love to stay on “The Walking Dead” for many more years. AMC has helped make it one of the most creative experiences I’ve ever had. It’s a show that I love [along with] everyone on it — they’re like family. I also have a first-look deal with AMC [for] a TV series I’m developing with Ridley Scott’s company. Considering I [will] celebrate my 30th year in the business [next year], I don’t feel I’ve slowed down at all. And I don’t plan to.

This article appears in the October 2013 issue of Pittsburgh Magazine.
Categories: Arts & Entertainment