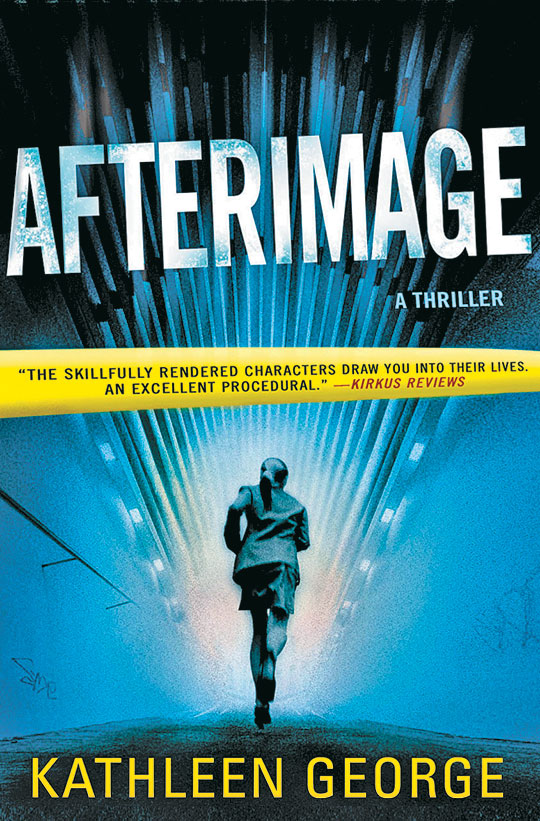 Have you noticed the way a new dynamic has entered the crime-scene story, sometimes even overtly voiced in the world-weary cop banter that takes place behind the yellow tape? It goes something like this: “Everyone thinks it’s like on TV”—meaning, that DNA samples are tested overnight, that records are easy to search, that cases get wrapped up by the end of the hour. (Oddly enough, they even say this on TV shows now.)

Kathleen George borrows a page from this playbook in her new detective thriller, Afterimage, as she tries to show the true grit of jobs on the force: In the Pittsburgh Homicide Squad depicted here, the crime lab is chronically backed-up and underfunded; the squad is shorthanded, and the detectives are frustrated and sometimes a little overwhelmed.

At the same time, of course, the story—which revolves around rookie detective Colleen Greer’s first real case, involving the murders of two victims Greer, tidily enough, happens to know from her earlier career as a counselor—progresses as smoothly as any television show.

(Note: This is hardly anything to blame George for; ultimately, when real cops complain about how everyone expects television-worthy endings, what they really mean is that their work is often dirty and tedious and short on rewards. And I think we can all agree that’s not what we want to unwind in front of at the end of a long, tedious day at work. Nor, for that matter, do we seek that in books intended primarily for purposes of escapism.)

So, yes, things are pretty clean, at least as brutal murders go—the same detectives are on both cases, quickly figuring out that they’re connected (rookie Greer is instrumental here, as you’d expect), Commander Richard Christie (whom fans will remember from George’s previous crime novels, Taken and Fallen) asks for help in the lab, and maybe it’s not really spoiling anything to tell you that everything is wrapped up in a little over a week. And have I mentioned all the cops’ extraordinary dedication? Even a secretary with a horrible cold comes in late-night to help with the case, and the others carry on with mere hours of sleep, neglecting their families and relationships in their eagerness to get the job done right.
Still, the story is pretty darn solid—certainly good enough to keep you turning the pages for plot alone. The shifting perspective, which flits among the detectives and their families and Greer’s boyfriend as well as one of the victims and the prime suspect, also keeps things moving along briskly.

But there are also a few things that set Afterimage apart from your standard detective thriller. First is George’s deep interest in the psychological makeup of her characters; Greer, for example, struggles with balancing her career with an outside life and perhaps begins to confuse her eagerness to please on the job with a little crush on her commander.

Related to this is George’s attempt to balance her own passions in her writing; she is not only an author of police thrillers but also a professor of theater at the University of Pittsburgh, and mentions of theatrical tricks—costuming, makeup, posture—are sprinkled here and there throughout Afterimage. (After all, there’s a fine line between acting and lying, right?) Finally, you can’t miss George’s passion for food and knowledge of Pittsburgh’s restaurants. These detectives may be overworked and under-rested, but they manage to find the time to eat: breakfast at Lindo’s, dinner at Tessaro’s and Alexander’s, and even sandwiches grabbed along the way are described and their composition and significance reflected upon—and that’s not how the cops usually do it on television.

This article appears in the March 2008 issue of Pittsburgh Magazine.