The East Liberty favorite is the latest inductee in the After Dark Hall of Fame. 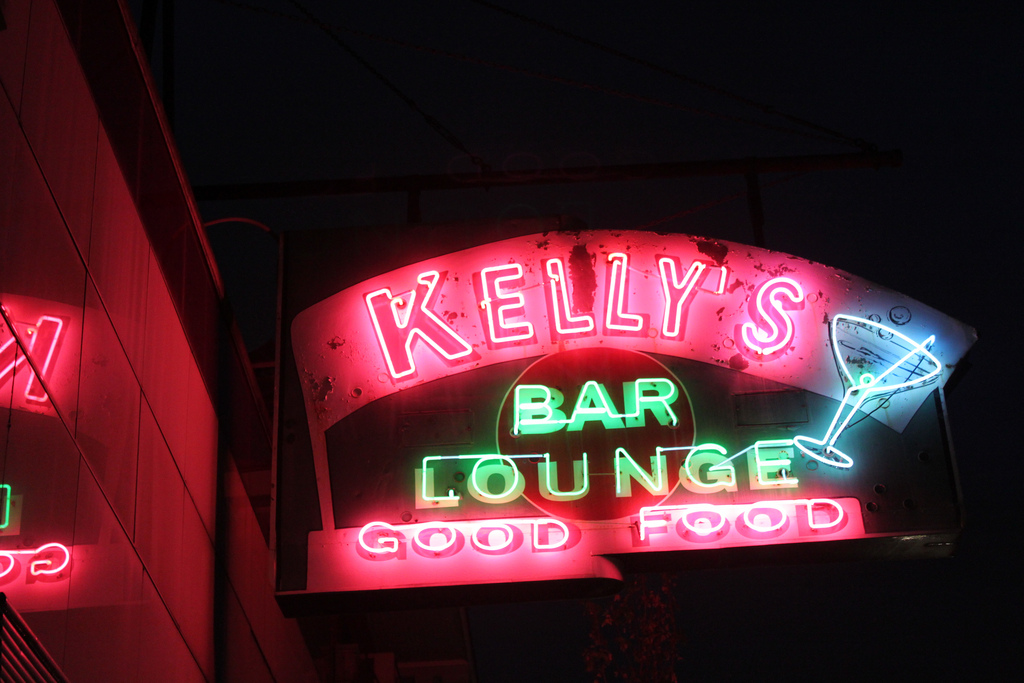 As a child, I had a vision of what a grown-up bar looked like. This image was mainly informed by ’80s and ’90s television shows and movies: candlelit darkness, neon in the windows, folks leaning in for intimate conversations over simple cocktails in highball glasses. An impossibly cool soundtrack permeating the room. Tattooed bartenders slinging drinks and lending an ear when necessary.

In 2016, that’s not a bar you find too often. In Pittsburgh, the majority of our watering holes are streetcorner mainstays or unassuming sports bars. Our trendier pubs are upscale affairs with cocktail philosophies and short, thoughtful menus. Our brewpubs are gleaming odes to the art of beer.

Kelly’s Bar & Lounge, though, is exactly the bar I grew up picturing.

The East Liberty stalwart doesn’t have a website. Its Facebook page has been updated four times in 2016. It needs no promotion, requires no social media strategy; it is simply there, a perennial favorite and reliable presence. As its neighborhood has changed and the Pittsburgh bar scene has changed even more, a trip to Kelly’s is the same experience it has always been: good cocktails, good food and good music.

And it’s worthy of a spot in the After Dark Hall of Fame.

Only one other individual bar has been inducted into this growing class, but Kelly’s has been on my mind ever since I came up with the concept. Among the 20 bars I cited as the city’s best in a 2010 Pittsburgh Magazine article, some have closed outright and others have fallen out of favor. Kelly’s, however, would undoubtedly be on that list again today.

It starts, I think, with the cocktails. Before cocktails with recognizable names were dubbed “prohibition-era,” they were simply drinks: the Manhattan, the Gimlet, the Sidecar. These are the offerings at Kelly’s — familiar, relatively simple creations which have stood the test of time. No research into bygone mixology is required to understand what’s being served here. If your grandfather had a favorite drink (besides a pint of Iron), it’s probably represented on the menu at Kelly’s. And, it should go without saying, the staff knows precisely what they’re doing in preparing these iconic beverages.

The food, though. The food. This is a bar where you wouldn’t necessarily expect a meal (if Kelly’s had never served a dish, I don’t think it would be any less popular than it is today). But there is a menu, and it is the pinnacle of comfort food, best exemplified by mac and cheese that’s frequently cited as the city’s best. It’s a dish that’s satisfying under any circumstances. (If you need a break from the mac, opt for the “Pittsburgh platter” of pierogies and kielbasa, an underrated winner.)

The atmosphere inside the small-ish bar is perfect, but the outdoor patio is even better. Kelly’s walled-in beer garden is unadorned and, thus, ideal — tables, chairs and strings of Christmas lights providing the only illumination other than moonlight. If you can’t enjoy your company out here, there’s something wrong with your company.

Kelly’s is every bar, and yet it feels unique and unparalleled among its local brethren. A hundred hipper bars in trendy neighborhoods have come and gone during its reign, all aiming to capture the authentic charm of this unassuming spot; most have missed the mark almost completely, and even the best don’t get it right to quite the same degree.

Welcome to the After Dark Hall of Fame, Kelly’s. Keep getting everything right.