The one-of-a-kind night of bingo, trivia and madcap monologues returns in a new spot. 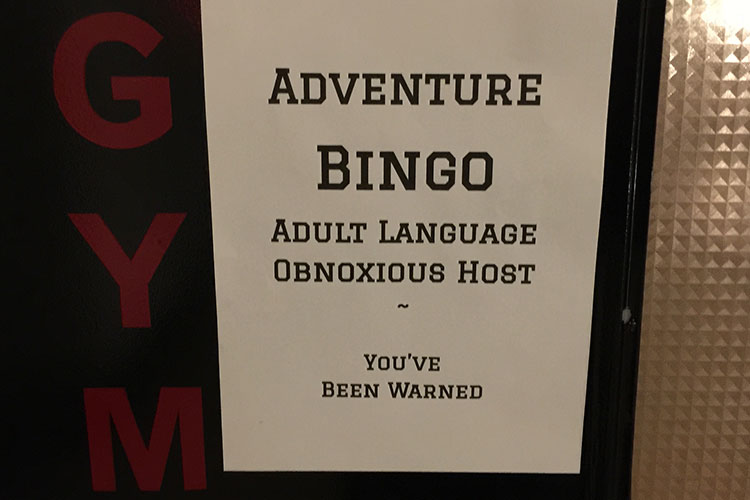 When I first attended Adventure Bingo in late 2014, I didn’t know what I was getting into.

A dressed-up bingo game, I thought. Or a trivia contest with another layer or two. Both things that aren’t too tough to find in the world; there are twists on pub games all over the place.

Of course, that’s not what Adventure Bingo is. Adventure Bingo is a one-man show from its dynamic host, artist Alexi Morrissey, wherein all other elements — the bingo, the trivia, the prizes, the drinks — are secondary to his flights of fancy and rant-tangents (rantgents?).

Writers aren’t supposed to use the word “unique” too often, but this … this is unique. The magic of Adventure Bingo cannot be duplicated; performance art melded with competition melded with sweat, more than anything else.

The game went on hiatus late last year in the waning days of its former home, the bygone Union Pig & Chicken. It’s returned as a three-month residency at the Ace Hotel Pittsburgh, the second night of which took place Tuesday; the final scheduled installment is coming up in March. (Keep an eye on the old Adventure Bingo website for the next theme and details, just ignore all of the out-of-date info about Union Pig & Chicken.)

So: Can such an idiosyncratic, undefinable night of entertainment survive in a new environment?

The questions, devised by Morrissey, are definitely part of the draw. Arranged along a monthly theme — last night’s was “Pittsburgh Music” — they swing unpredictably between common-knowledge and utterly obscure. You’ll likely be led toward the tougher answers, if your host is so inclined, and you’ll probably be competing against others with the same lucky number. The experience of facing a trivia question is itself distinct, occupying an odd experiential middle ground between being chastised by a schoolteacher and running down the aisle on “The Price is Right.”

Good food and drink make up part of the appeal, and that element of Adventure Bingo has transferred seamlessly from Union Pig & Chicken to the Ace; a selection of picnic-grub dishes provide fine accompaniment, and a short drink menu features a selection of dedicated cocktails alongside canned beer. (Anything from the Ace’s fine bar is available as well.)

Adventure Bingo does lose a step in the Ace’s cavernous gym, as the game requires a dark intimacy; I’d like to see it stay at the Ace, which matches the sensibilities of the game quite well, but I’d like it to move to a more suitable space within the hotel.

But that’s a mild objection; Adventure Bingo is a Pittsburgh treasure, a unicorn of weeknight entertainment we can’t afford to lose. Perhaps it’ll stay at the Ace beyond this residency and hopefully it’ll remain near its former home either way — but I’m confident it’ll re-emerge and remain enthralling.