Pitt forward Talib Zanna’s 5,000-mile journey to Oakland is paying off in points and confounded opponents. 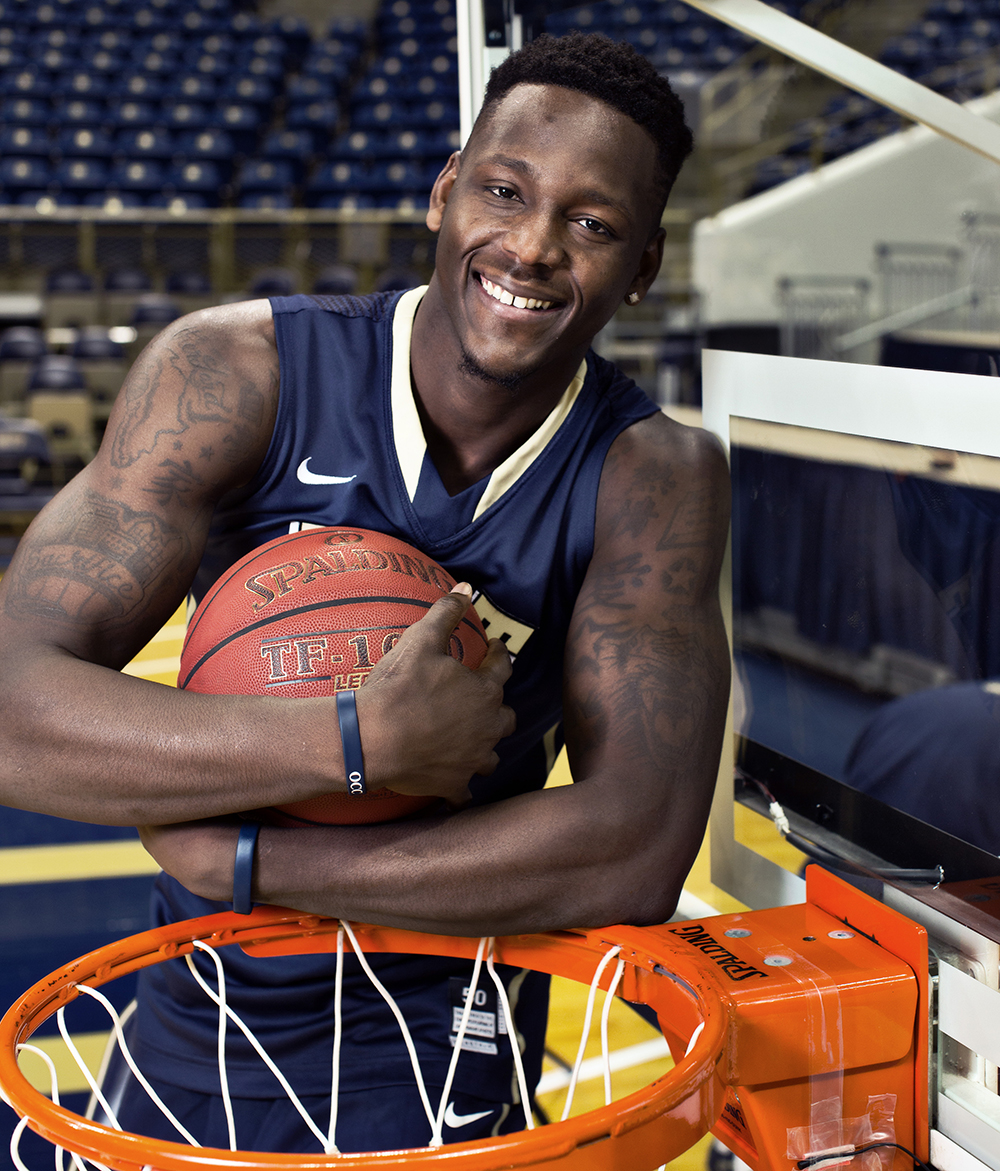 One morning, about 10 years ago, Talib Zanna returned from a lung-busting run through the mountains outside Kaduna, Nigeria. Exhausted, he walked through his family home, passing his brother Muhammed’s room; inside, his elder sibling sat rapt in front of a TV. Muhammed was staring intently at an NBA game between the Spurs and the Rockets, recorded onto a VHS tape days ago.

“I just liked the way Tim Duncan was playing,” Zanna says, remembering the grainy recording that propelled him toward a life of basketball and the University of Pittsburgh. “I wanted to be in the same position that [he was].”

Like everyone in Nigeria, Zanna played soccer as a child. When a growth spurt shot Talib above the 6-foot mark (he stands at a towering 6’9’’ today), hoops-obsessed Muhammed introduced him to a coach.

“I started to get the feel of the game,” he recalls. “I kept working hard, and I fell in love with it.”

The determined forward grabbed the attention of coaches and scouts as he progressed to a camp in booming Lagos; a selection as one of Africa’s top 100 prospects landed him in front of NCAA Division I coaches. If there was going to be a next step in Zanna’s career — and his athleticism, talent and size certainly made it likely — it would take him to America.

He moved, on his own, in 2006. Zanna’s distinguished high-school career at Bishop McNamara High School in the D.C. suburbs brought interest from a dozen colleges — but he chose Pitt. As part of the highly touted incoming class of 2009, he was met with fanfare. But an injured finger sidelined him for the 2009-10 season; he showed flashes of his potential in 2010-11, but continued to struggle with injuries.

As his confidence returned, though, so did his shot. In his first 2011-12 appearances, Zanna created trouble for Pitt’s foes; his quick movements and seemingly endless reach led to easy rebounds and frustrated opponents. As Pitt was stumbling, Zanna was emerging as a serious scoring threat; last March, he led the Panthers through the College Basketball Invitational Tournament, averaging 11.8 points per game. At season’s end, the team named him its best defensive player.

If Zanna keeps up the pace he’s set through the beginning of this, his junior season, he’ll be in line for awards on both sides of the ball. Through 16 games, Zanna led the team with 13.2 points per game. Against a limp Delaware State at the Petersen Events Center on Dec. 19, he totaled 20, matching a career high.

Scoring seems to come easy for Zanna, who’s effortlessly positioned to shoot. He’s quick to share the credit — “James [Robinson] and Tray [Woodall] are pass-first point guards. If you’re open, they’ll pass it to you,” he says — but anyone with a view of the court can see the unhumble truth: Talib Zanna can do a lot with the ball, and he knows it.

Before each game, as the Panthers charge from the locker room, Zanna — a devout Muslim — pauses, taps his chest and points toward the heavens. But this game-time prayer isn’t simply a matter of routine. “When I was 18 — I had the SAT the next day — I got a call from Nigeria,” he says. “My father had passed away.” Zanna hadn’t been home in years, not since the day he moved to the States. “I broke down. I couldn’t do anything. It took me a while.”

But after the shock lessened, the journey ahead was made all the more clear. “He loved the game, so now I’m playing the game for him. I want to make him proud.”

This article appears in the February 2013 issue of Pittsburgh Magazine.
Categories: From the Magazine, Hot Reads, Sports