These Pittsburgh couples decided to keep things classic with a traditional cake — with multiple layers. 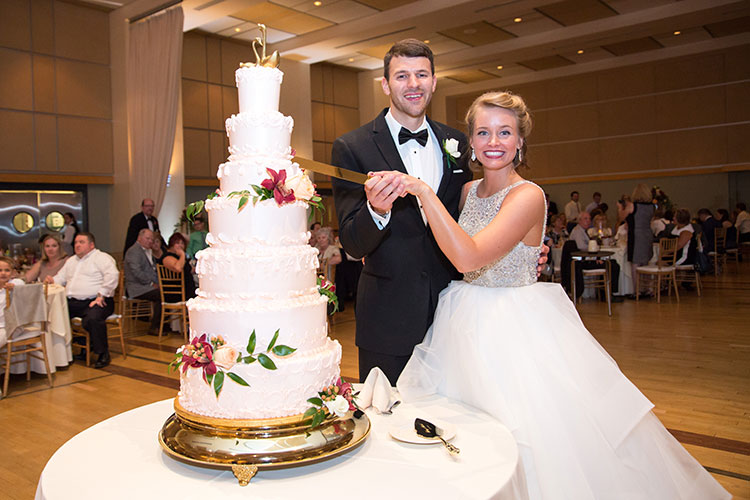 When it came time to think about their wedding cake, Hillary Barton and Mike Medved had an advantage: Hillary and her sister own the bakery portion of Barton’s Flowers and Bake Shop in Elizabeth. Hillary made her wedding cake, and the couple opted to go for a classic tiered design: Their cake was made to match what seemed to be the theme of their day: height.

Hillary and Mike’s wedding reception was at the Circuit Center Ballroom in the South Side, in a room with high ceilings. Hillary’s father, a florist, created tall centerpieces for their tables, and the couple themselves are self-described tall people. All of this inspired the design of their cake.

When Hillary designed the cake, she went with old-fashioned hand detail in the piping. To keep with even more traditional cake elements, the cake stood on a gold cake stand and had two gold swans as the topper.

“Hillary has this uncanny ability,” Mike says, describing his wife’s cake designs. “She just kind of does it, and it’s breathtaking.”

The result was a cake that stood taller than the couple. Mike says that he and Hillary were happy with how the cake, its stand and the topper went together. 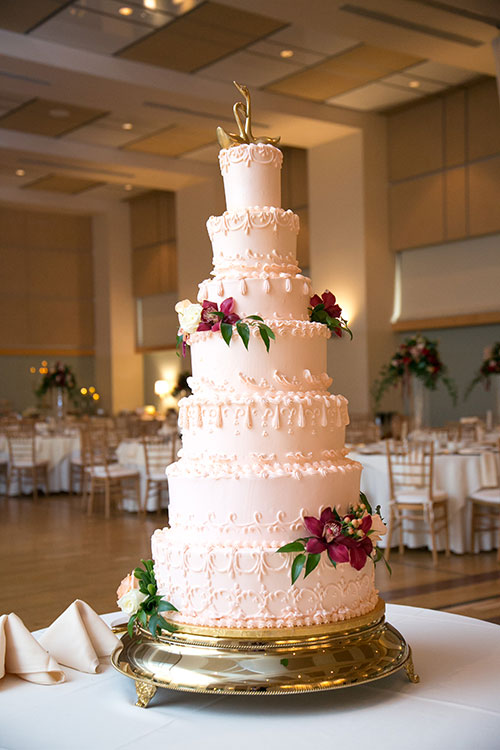 “Mike and I fell in love with old-fashioned style,” Hillary says. “What inspired us was just tradition.”

They broke from one of the most well-known Pittsburgh traditions, though, when they decided to have a cake table instead of a cookie table. Hillary and her sister came up with the idea of having 50 different 6- and 8-inch cakes, and while Mike eventually loved the idea, it was hard to for him to give up the cookie table that strongly represents his eastern European roots.

Ultimately, the cake table was a hit amongst their guests.

“By the end of the night, only a few slices remained,” Mike says. “We were amazed.” 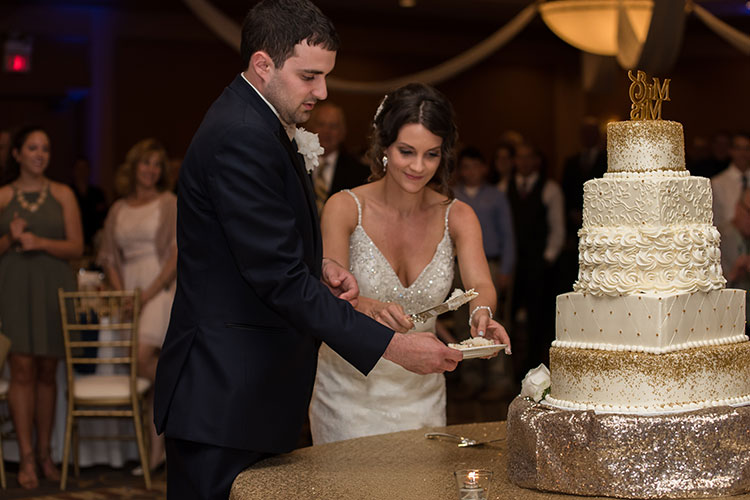 Christine Jazwinski and Anthony Sperdute wanted time-honored wedding ideas when planning their big day, and that included the tiered design of their cake.

Christine says that Anthony went into the cake idea by saying, “Let’s see how high they’ll make it.” Christine remembers him saying that their wedding was the only time that they could celebrate with a big cake. 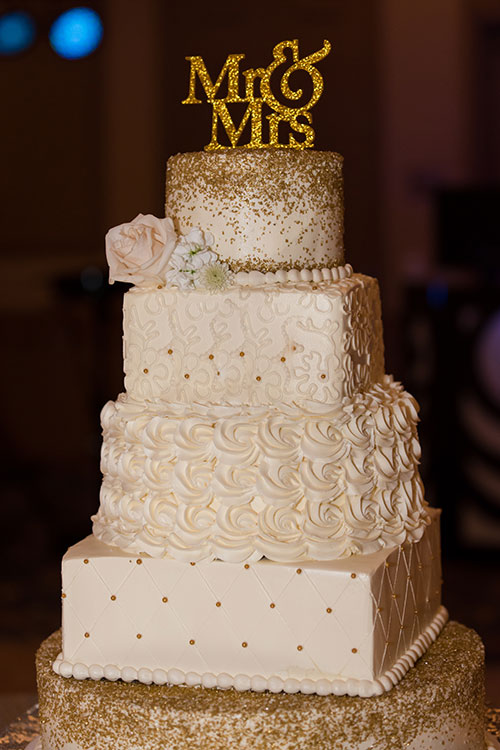 The cake, designed by Cakes by Tammy, ended up being five layers. The cake designer had the idea to make every layer a different pattern, and the varying patterns are something that Christine says reflected a modern and contemporary style while keeping with the traditional look.

Christine says that she had always wanted a traditional cake, and in the face of new wedding dessert trends like donuts and cupcakes, she wanted to stick with her original wedding vision.

“Growing up, I had my wedding dreams about the bouquet toss, my dress and the cake,” Christine says. “I never grew up wanting to give someone a donut.” 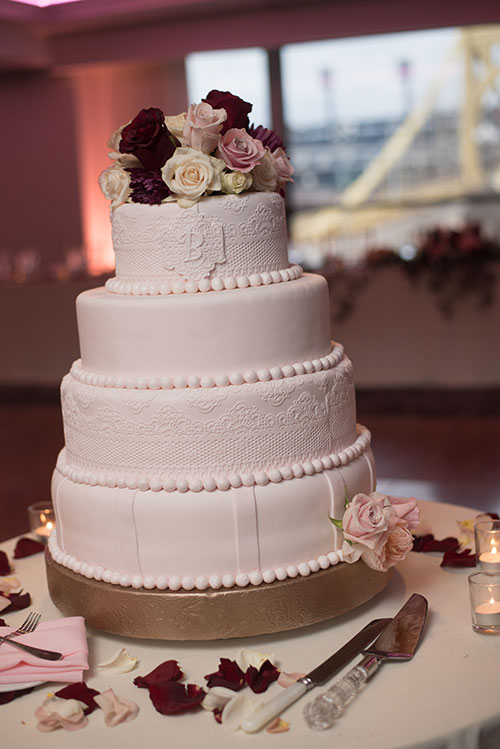 Brianna Thomas says that she wanted the classic wedding symbols to stand out when she married Justin Bendik, and the cake was one of them.

A family friend of Brianna’s who makes cakes out of her home with her sister designed the cake. Brianna and Justin’s cake was the first wedding cake that she made, and the design was inspired by pictures that Brianna found on Pinterest.

“I did not want a cake that was too flashy, but [something] simple and elegant that caught the guest’s eye,” Brianna says. 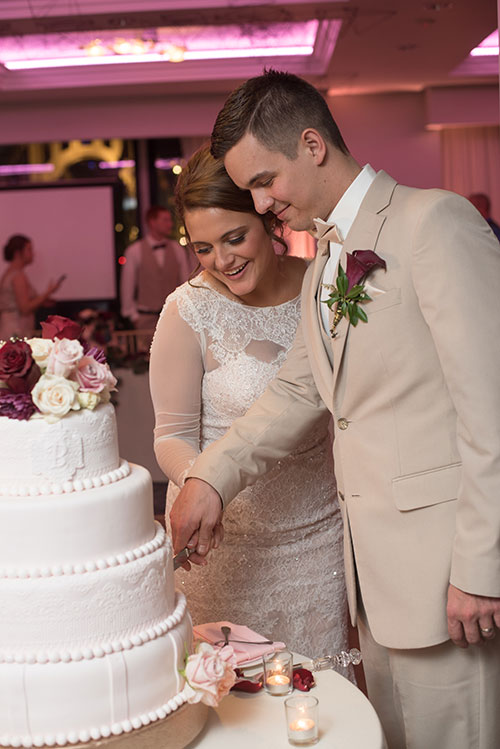 The couple also incorporated a more modern trend: a groom’s cake. The cake was designed as a submarine, as Justin is currently stationed on a submarine for the U.S. Navy. Brianna says that the groom’s cake was one of the newer trends she liked, and it also offered guests the chance to have two cake flavors to choose from.

“The biggest thing I tried to stay true to when planning my wedding was sticking to the traditions,” Brianna says. 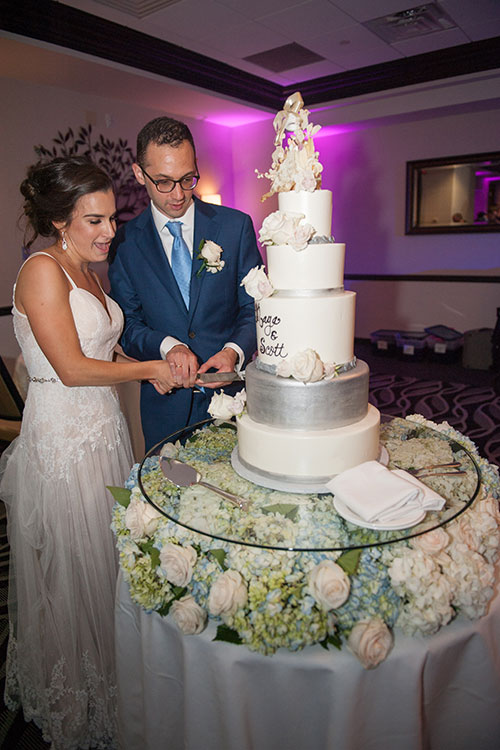 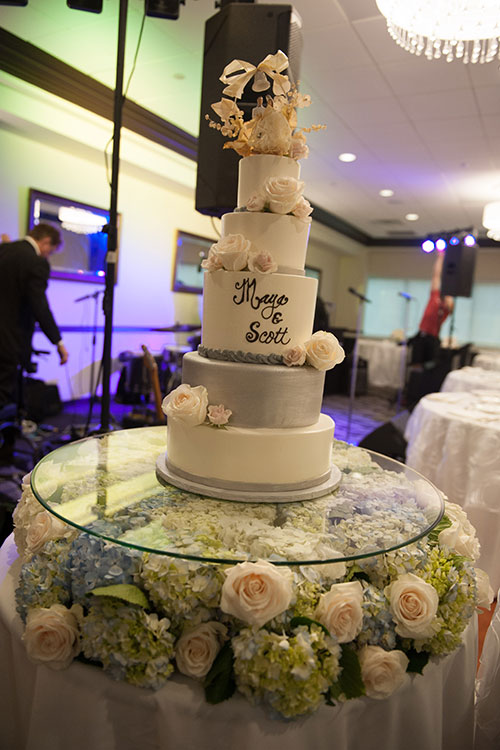 Maya Poplavski describes having a tall cake at her wedding with Scott Steckel as being similar to having a piece of artwork on display.The couple wanted a big cake to be an eye-capturing piece for their guests, and they also thought it would make their cake-cutting pictures more fun.

Their cake, designed by Jenuine Cakes, was five layers with silver and blue accents with a few real flowers to add to the design. Maya and Scott wanted to include flowers in their cake design, but the couple says that there are a few drawbacks to having real flowers on the cake, such as the amount of chemicals used for preservation.

“I like flowers, but I don’t want to eat them,” Maya says. 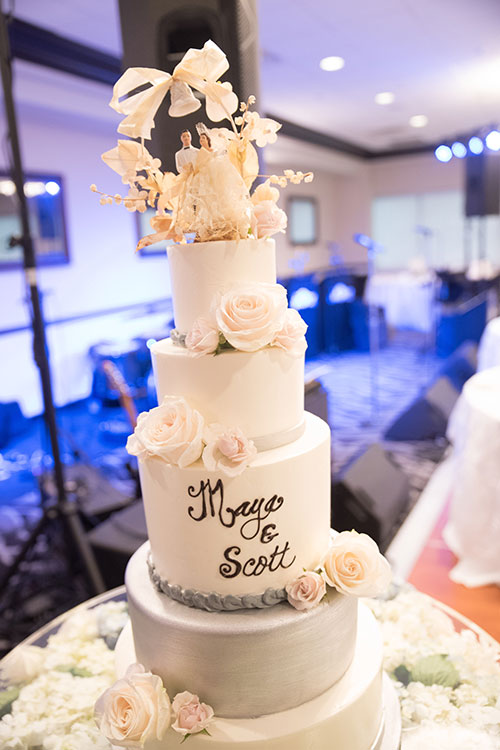 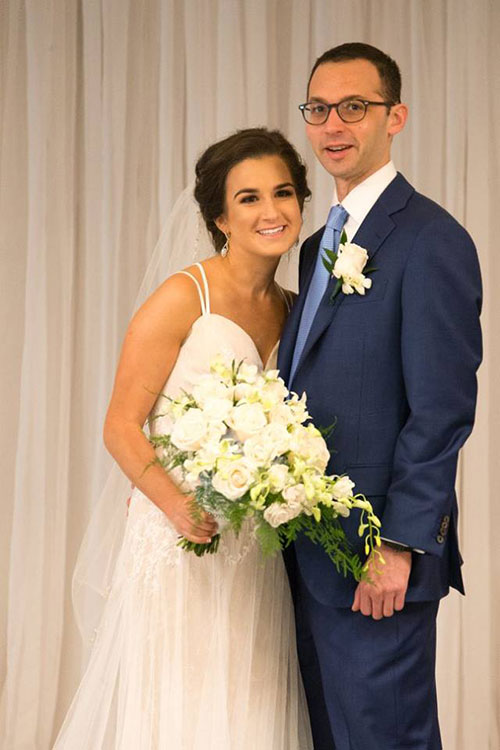 Instead, the couple incorporated flowers through their glass cake table. Dozens of flowers from hydrangeas to roses were arranged under the glass table. The idea came from a picture that Maya saw on Instagram, and it allowed for the couple to play with the idea of tradition by adding in a new dimension with the cake table.

At first, Maya and Scott thought that they wanted a modern wedding, but as their planning went on, they decided to stay with the classic idea of a wedding, and that included their cake. The couple says that they wanted to be able to look back on their wedding day with no regrets, and while some of the trends are in style now, it might not always be that way. The classic look that they went with embodied traditions that are truly time honored.

“It’s been pretty for decades,” Maya says. “It’s not going to go out of style.”