A Tale of Two Kitchens

The Youngs and the Deatons both knew they wanted to overhaul their neighboring 1930s-era stone homes in Mt. Lebanon, but their contrasting tastes resulted in two distinct design styles. 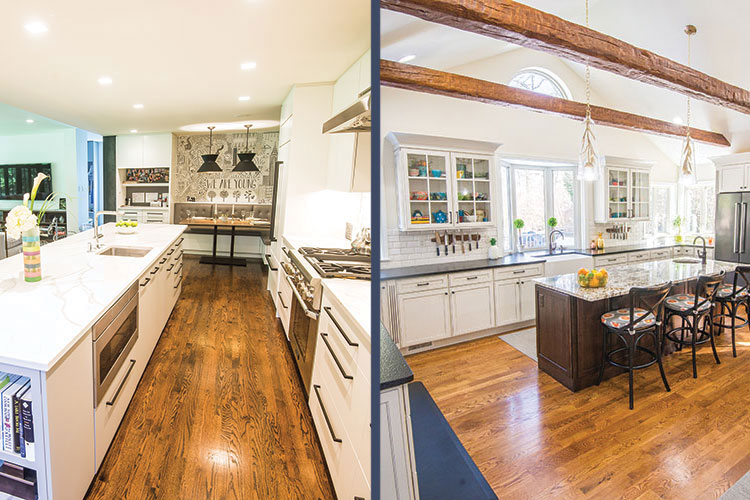 Upon first impression, the two Tudor-style homes sitting side-by-side on a quiet street in Mt. Lebanon look similar — that is, until you peek inside.

All transplants to the area, neighbors Jeff and Laura Young and Mary and Scott Deaton shared similar goals when they set out to revamp their lookalike 1930s-era stone homes, but their contrasting personal styles resulted in two interior spaces that couldn’t be more distinct.

The families share a neighborly relationship and have spent time in each other’s homes on a few occasions. Their renovation jobs nearly overlapped, and when they’d swap stories, they realized they both wanted to create more liveable spaces while keeping with the character of their existing homes.

They’d be doing it, however, in totally different ways — the Youngs incorporating modern elements with the Deatons sticking to a traditional aesthetic.

“We wanted the new space to keep true to our home’s traditional style, while improving overall flow of the main floor and instilling new life into our former kitchen and dining areas,” says Mary Deaton. “My personal style is to comfortably blend old and new furnishings with a mix of layered textures, warm metals and artistic elements.”

The Youngs set out to respect the existing house by not overwhelming it with an oversized addition.

“We did this by tempering the instinct to build the most possible, and instead try to build the best possible,” says Jeff Young. “Stylistically, we like to think that what we ended up with is what the Tudors would have done if they were modernists.” 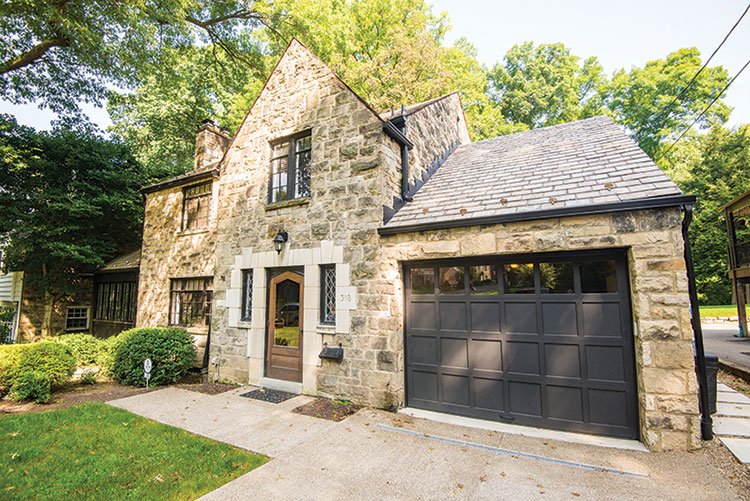 The Youngs moved to the area from New York City seven years ago. It was a return to the Pittsburgh region for Jeff Young, a Squirrel Hill native who’d spent time in the Big Apple working as an architect specializing in commercial and corporate projects. He is now a principal with the Pittsburgh office of Perkins Eastman.

He and his wife share an appreciation for a modern aesthetic, with an emphasis on smart use of space. They’d known early on the home they share with daughter Addie, 10, and son Evan, 7, would need a more open floor plan to accommodate their lifestyle, but also wanted to maintain the integrity of the original structure as much as possible. 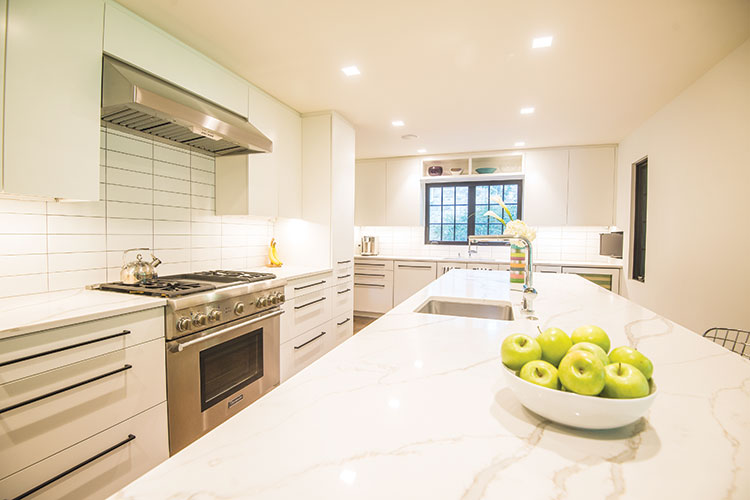 “There was an existing home here that needed to be respected,” says Jeff Young.

Working with CCS Architecture’s Taylor Lawson, a former classmate of Jeff’s who does high-end residential work in New York City, the couple spent two years creating their ideal plan. While many remodelers’ minds go straight to getting that coveted extra bedroom or living space, the Youngs focused on making necessary changes with quality in mind rather than tacking on “nice-to-have” elements simply because they could. 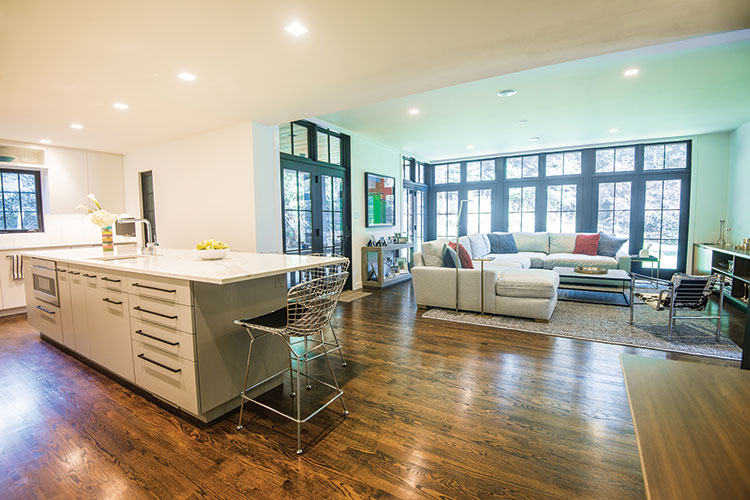 On the home’s facade, the garage was extended to become more functional. To ensure it retained its original aesthetic, the couple also carefully saved the stone from the garage and reused it while mixing in some new pieces. The slate roof also was repurposed and supplemented with additional material to match.

The more dramatic changes are not visible from the street. An addition constructed of stained black cedar in the rear of the house encompasses a spacious family room that opens to a bright, minimalistic kitchen. 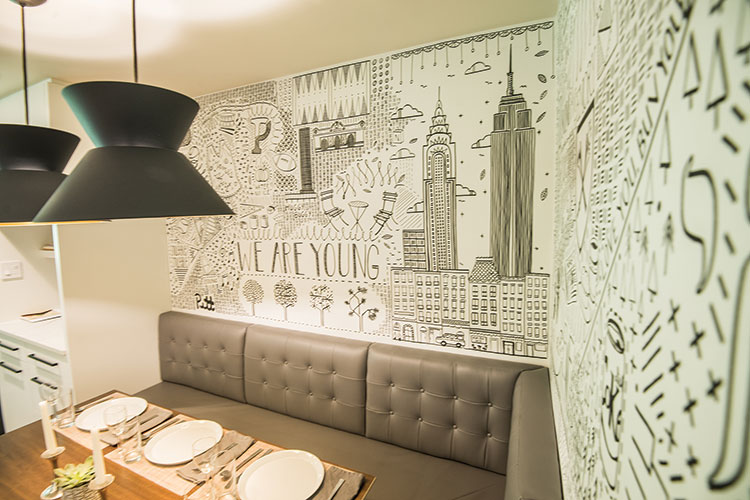 Clean lines create a soothing effect in the comfortable space, the hub of which is a 12-foot island with quartz countertops and ample seating. Chocolatey floors carry into the addition from the existing structure, providing a pleasing contrast to kitchen’s otherwise light color palette.

While the upper cabinetry is white, save for the chrome sink and chairs and black pulls on the cabinets and refrigerator, the island cabinets are a soft grey meant to complement the silver veining of the countertops as well as the banquette cushions located in the dining nook. 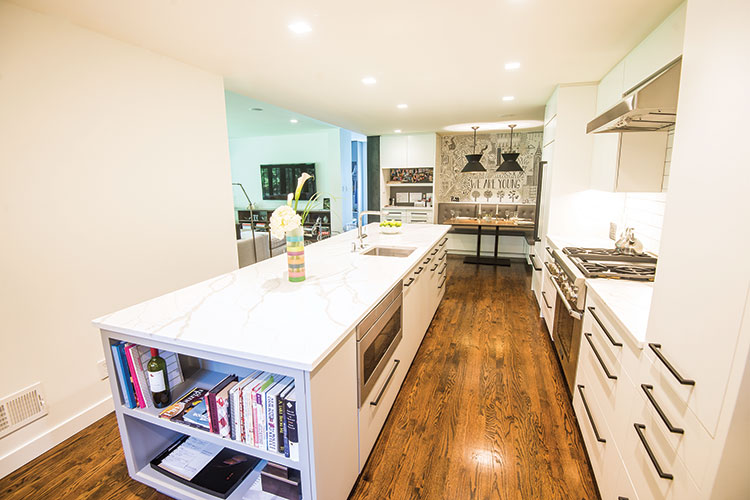 One of the kitchen’s highlights is a black-and-white narrative mural on the walls behind the banquette seating done by local artist Kim Fox of Worker Bird. After getting to know the family, their likes and dislikes, Fox created the mural featuring their favorite things.

For example, the renderings of the Chrysler Building and the Empire State Building represents the couple’s time in New York City, where they met. The tap shoes and drums are for Addie, who loves to sing and perform. A turkey symbolizes the Thanksgivings dinners held at the Young house.

“Every single piece on here has some sort of meaning to us,” Laura Young says.

Because the ceiling is 8-feet high, the couple opted for a uniform field of downlights over the island and saved pendant lighting for above a corner booth table, which is where Addie and Evan like to set up shop for schoolwork and other projects.

Storage options are aplenty, from cabinetry beneath the island to pull-outs under the booth seating. A business center keeps day-to-day items organized. Laura Young says Ida McConnell of Cuvee Kitchen Designs in Glenshaw aided her husband with coordinating the room’s countertops and cabinetry layout.

The team from Bethel Park-based Penrod Construction used hidden beams and columns to create a seamless transition to the addition. However, one indication of its former state does remain — a section of the home’s original stone exterior wall is exposed to the living room. 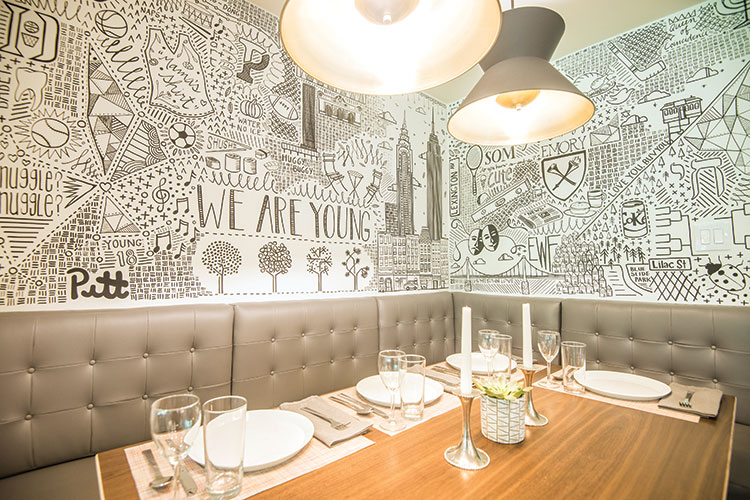 The space is awash in natural light thanks to an inventive row of fixed doors running across the back wall. A top row of awning windows are able to be opened during warmer months.

The family started living in the new space in November. Besides the addition, changes included moving the laundry room upstairs, adding a mudroom, putting a second story bedroom above the garage and digging out space beneath the addition for a future game room. The renovations have allowed everyone in the house to feel even more at home.
“I feel so much more settled,” Laura Young says. “I feel calm and like everything has a place. I want to be at home more, because I just enjoy it. I’m happy here.” 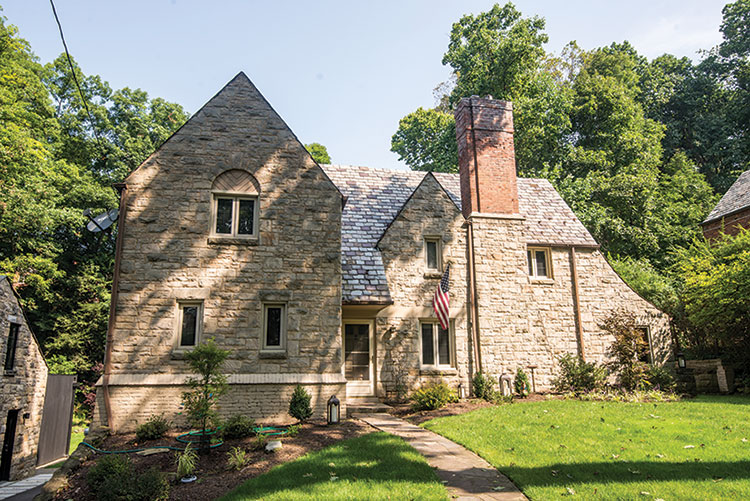 Next door, Mary and Scott Deaton wrapped up work on their own addition more than a year prior. The couple, who moved from Washington, D.C. 13 years ago and are parents to daughter Nevada, 13, considered selling when the limitations of their sectioned-off home started interfering with their ability to spend time together as a family.

The biggest problem was the galley kitchen, a room completely cut off from the rest of the house and that left anyone working in it isolated. Its design was far from ideal for a couple who loves to cook — and a daughter who enjoys baking. 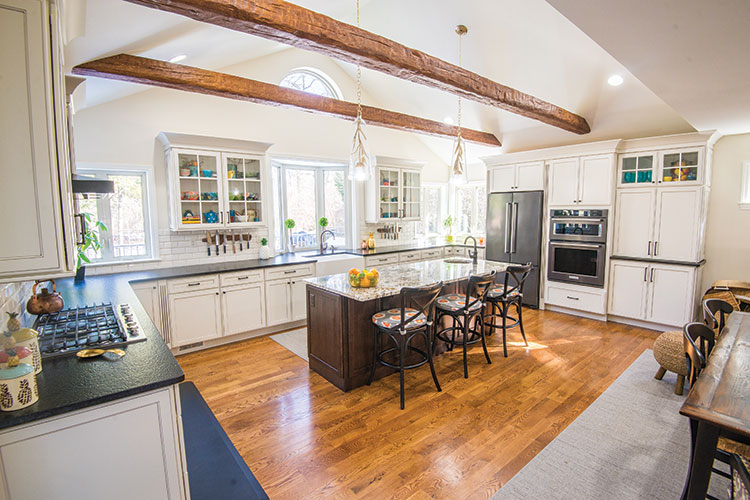 “You couldn’t open the oven and the dishwasher at the same time,” says Scott Deaton with a laugh.

When the Deatons opted instead for a redesign, bringing the kitchen into the heart of the home was the main goal. They worked with C W Carlson Construction of Bethel Park to add a 20-foot by 20-foot space onto the existing living room, creating a combined kitchen, dining and living area.

Mary Deaton says she knew she wanted the space to be fun, with timeless rustic touches. 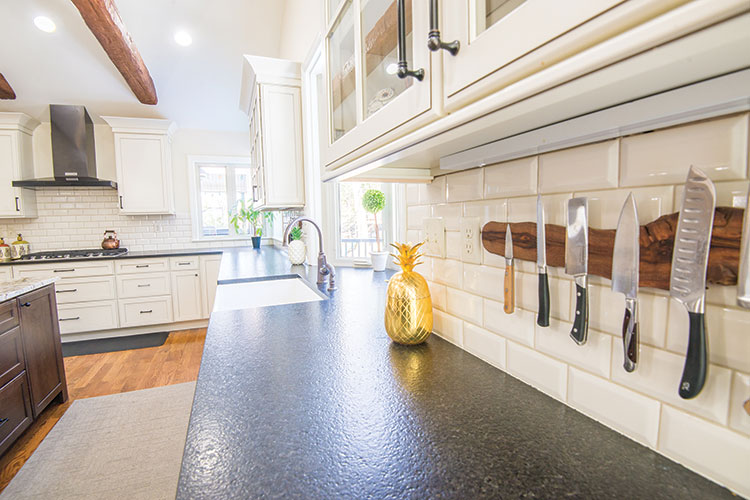 “In terms of the style and design, I wanted symmetry,” she says. “I wanted it to be simple and functional. I wanted to make sure it fit with the character of the home.”

A bay window on the back wall with views of the backyard and woods beyond became the focal point of the renovation. Mixed metals and varying finishes add to the cozy, lived-in ambiance. The copper, cream and black granite atop the island offers depth, while the black matte leathered granite of the expansive countertops appears purposefully weathered beneath a beveled tile backsplash.

Pops of color present themselves behind glass cabinetry displaying decorative glassware and ceramic. Exposed wooden beams draw the eye up to the cathedral ceilings, where petaled pendant light fixtures of downward-facing brass flowers topped with clear-paned cloches from Anthropologie add the perfect punch of whimsy. 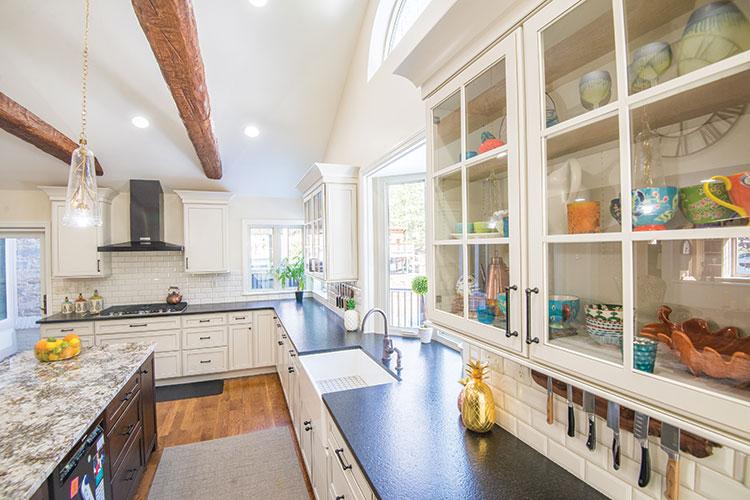 A farmhouse-style dining table — nearly the same one the Youngs have in their own dining room — provides additional seating.

To ensure the addition fit with the existing character, archways with a similar shape to others throughout the home lead to the living area, which is separated from the dining space by a half-wall.

To connect to the rest of the house, the couple added a walkway between the kitchen and the room that now serves as Nevada’s den. The former kitchen was converted into a utility/laundry room. 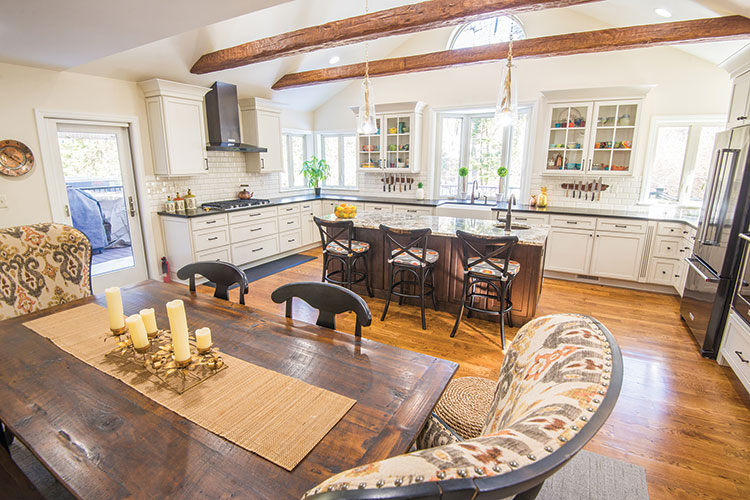 Outside, the expansion resulted in an extended deck above a carport. Below the main floor addition is an unfinished room that will become a walkout bedroom with full bath.

Upstairs, the renovation allowed the Deatons to expand the master bath space and add a walk-in closet. 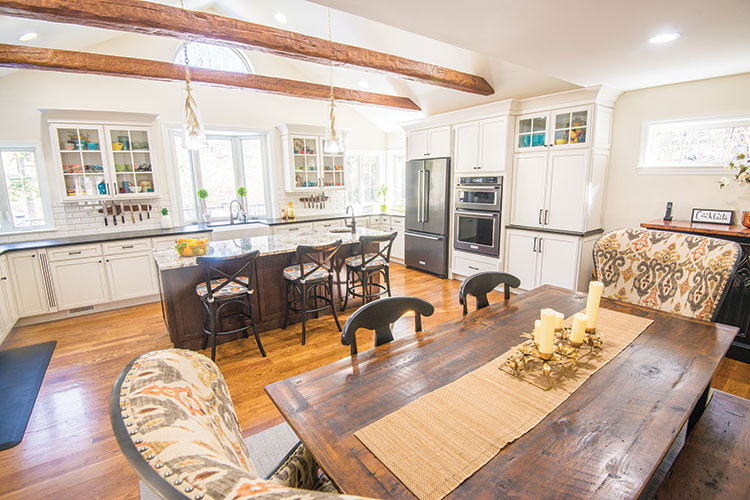 While the finished product couldn’t be more different from their neighbors’, the work did result in a similar outcome. Much like the Youngs, the Deatons have gained a deep appreciation for how their redesign has affected the way they are able to live in their home.

“It’s really transformed the way we all interact with each other,” says Mary Deaton. 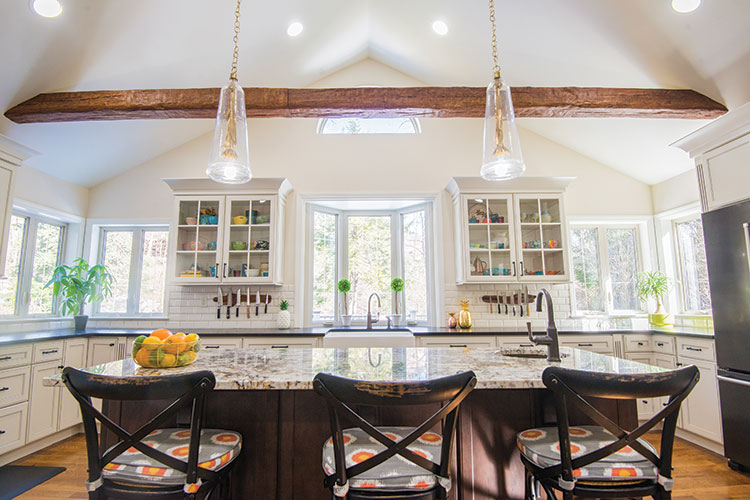 This article appears in the October 2018 issue of Home & Garden.
Categories: From the Magazine, HOME + Design, Hot Reads