A Star Is Born

The Resident Artist Program at the Pittsburgh Opera exposes young singers to new roles — and audiences to new voices. 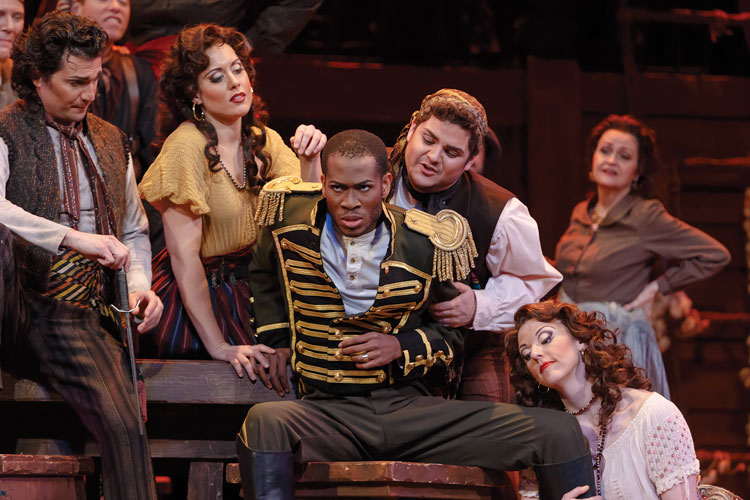 Through Jan. 31, Laurel Semerdjian will play the supporting role of Meg and Adam Bonanni will portray Laurie, another supporting role, in the Pittsburgh Opera’s production of “Little Women” alongside five other resident artists at the opera house. Three weeks later, the singers will take on even more demanding roles in a contemporary show, “27.”

Throughout the rest of the season, the young performers, who typically are in their late 20s and fresh out of master’s or apprenticeship programs, will appear with renowned guest artists in mainstage shows at the Benedum Center. There’s also a resident stage director.

The amount of experience they gain through the Pittsburgh Opera’s two-year Resident Artist Program is unparalleled.

“In a lot of companies, you have the company, and it has a young artist program, and it’s off to the side,” says Christopher Hahn, the Pittsburgh Opera’s general director. “We have two fully dedicated performances for them and with them. That’s a very proud flag to fly … No other opera company has even one fully staged production (for resident artists), let alone two.”

Hahn, who came to the Pittsburgh Opera in 2000 after stints at San Francisco and Los Angeles opera companies, says integrating the program in the company is beneficial because it’s developed a reputation of recruiting the best singers who move on to advance in their careers. And, of course, it’s beneficial to the young artists.

She and Bonanni, a graduate of the Mannes School of Music at The New School in New York, started the program in 2014 and will complete it after the season’s final performance this May.

​Bonanni, who was in the young-artist program at the Lyric Opera of Chicago when he auditioned for Pittsburgh’s program, says the experience he’s gained here is invaluable.

“It takes 10 years to learn how to make a true operatic sound,” the 27-year-old says. “It’s the Olympics of singing.

“It’s the most highly cultivated type of singing … You can stand in a practice room and sing well, but to be on stage with a costume singing for 90 percent of the time, maybe more, in a language that’s not your own … it’s different from any other kind of performance.”

​Semerdjian, 28, adds opera, unlike other types of musical performance, does not permit performers to use microphones or amplification. Singers must project their voices to the back of an auditorium such as the Benedum Center — over an orchestra.

“In a practice room, you work on technique, but that’s why the Resident Artist Program [is so important] — you need to put it all together,” says Bonanni.

The company started offering the two resident artist productions as part of the season-ticket holders’ package a few years ago, and the young singers are widely lauded, Hahn says.

“Every season without fail, every single donor says, ‘Oh my goodness.’ Of course [the artists] were wonderful when they came in, but they’ve been completely transformed.”

Part of the joy of having the young artists perform “Little Women” comes from the fact that many people in the audience already know and love the story, Hahn says.

“It’s very rewarding because the audience is completely behind the whole thing, but the music is a challenge, and that’s exactly what you want for these singers,” he says.

“Opera is in no way a dead art form. It’s bursting at the seams,” says Hahn. “New operas are being developed all the time on fascinating subjects.”

The plot of “27” involves the love story of Pittsburgh native Gertrude Stein and Alice B. Toklas. Supporting characters in the opera, set at Stein and Toklas’ Paris salon, include Ernest Hemingway and Pablo Picasso.

The show is written for a tenor, baritone and bass baritone to portray the supporting characters. Semerdjian will play Stein and another resident artist will portray Toklas.

Hahn, who works closely on the program with Bill Powers, the director of administration and artistic operations at the opera, says putting shows such as “Little Women” and “27” in the repertoire — as well as casting the resident artists in the main-stage shows — gives young singers a wide variety of opportunities to grow.

“Every year we say, ‘Oh my God, this is the best group ever,’” he says. “I’ve started to say the Resident Artist Program is the living heartbeat of Pittsburgh Opera. Take it away, and we become less.”