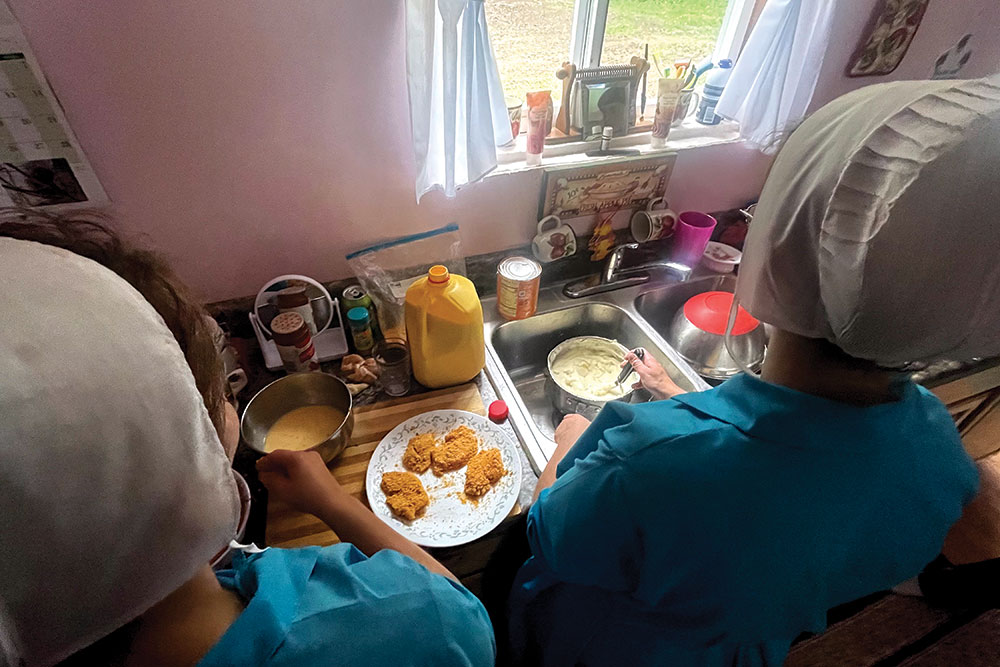 I have been invited to dinner with the Amish.

It’s a hot Saturday afternoon in August. Planning for the dinner has not been easy, as the Millers do not have a telephone. The arrangements have been made through mutual friends.

I have been reminded — gently, but often — that the Amish do not allow photographs of themselves, as it would be a violation of the second Commandment (“Thou shalt not make unto thee any graven image”). I ask if I can photograph their hands as they prepare the meal; surprisingly, they agree. 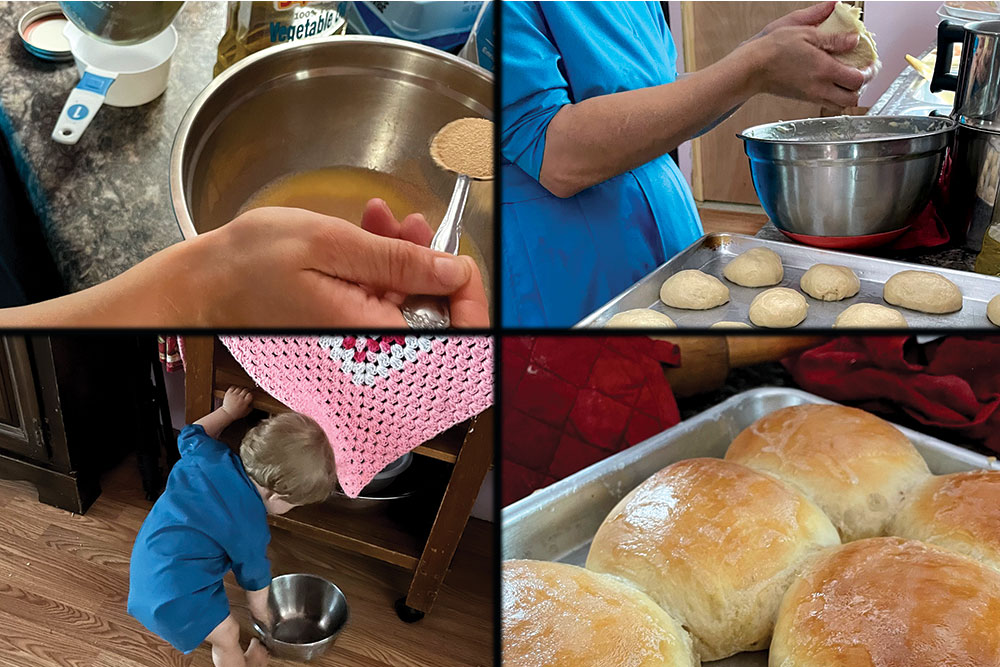 SARAH ANN SETS ASIDE THE DINNER ROLLS TWICE TO ALLOW THE YEAST TO RISE, WHILE MICHAEL HELPS KEEP TRACK OF THE POTS AND PANS

The Millers live in Reynoldsville, 20 minutes northeast of Punxsutawney, in a large home surrounded by green pasture and woods. A pony munches grass at the fence and two tiger-striped kittens play in the front yard under a vine-covered arch that leads to the front door. Daniel and Edna Miller and their three sons — Melvin, Joseph and Michael — welcome me inside. Also joining us are Edna’s brother, Andrew, and his new wife, Sarah Ann.

“We’re making an Amish wedding dinner,” Sarah Ann says — dishes traditionally served at a marriage feast. At their wedding, just two weeks ago, they served this menu to almost 300 guests. 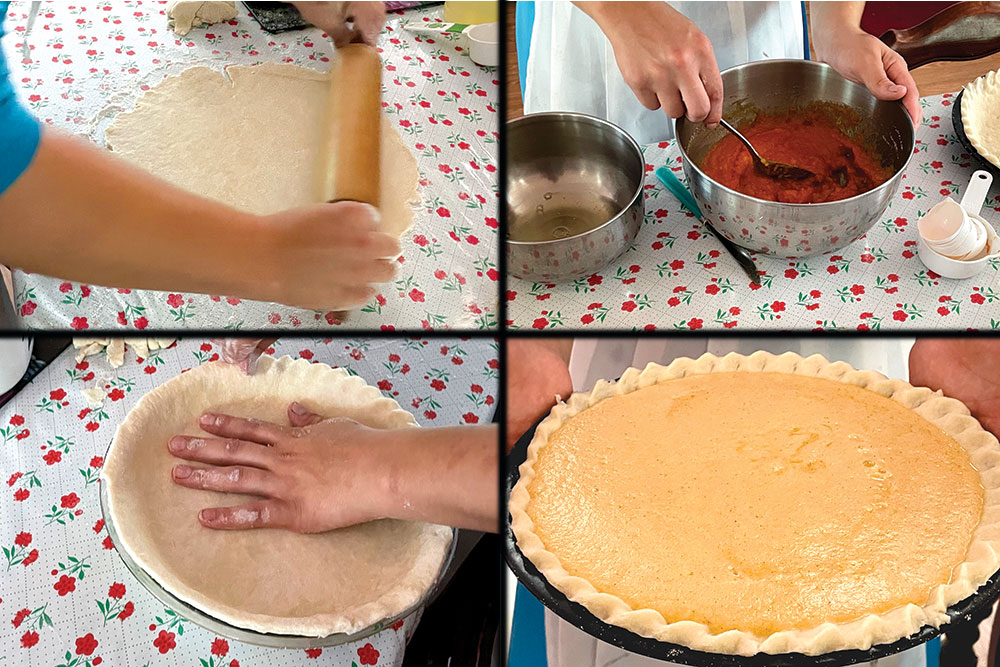 EDNA MAKES THE CRUSTS FOR THEIR PUMPKIN AND PECAN PIES FROM SCRATCH. SEE THE RECIPES BELOW

“This isn’t the first pie crust you’ve ever made,” I joke to Edna, who smiles and shakes her head. Her hands move so quickly I can barely keep up.

“Would you like pumpkin pie or pecan?” she asks. She decides to make both. 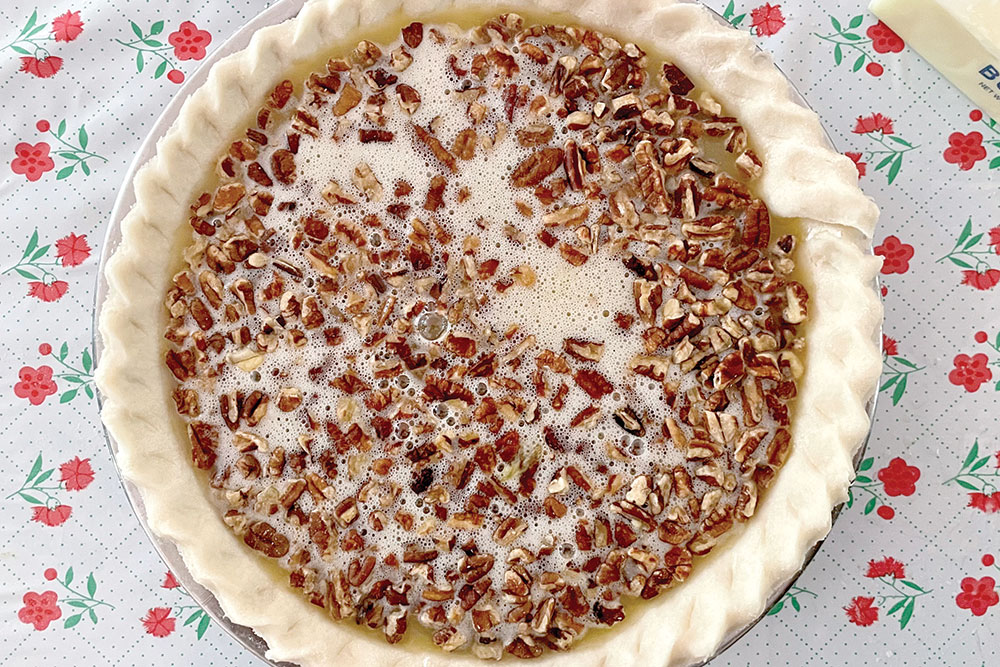 While the yeast rises, Sarah Ann cuts up chicken breasts and peels potatoes. The corn waits in a large pot, already husked.

They tell me their meal is nothing fancy. They are nervous and they hope I will like what they are making. While they work, they teach me how to count to 10 in Dutch. I learn the words for cat, table, fire and pie. Daniel shows me how his cigarette rolling machine works. The boys play together noiselessly outside the back door, and I almost forgot they are there. 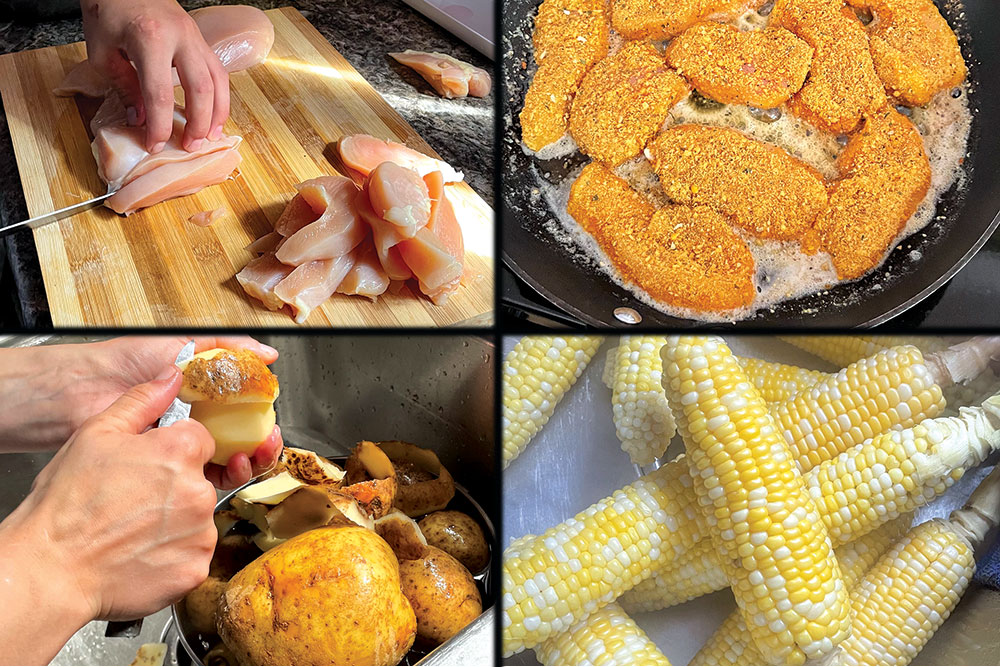 CHICKEN BREASTS ARE SOAKED IN A WASH OF EGG AND MILK, THEN BREADED WITH CORN FLAKES AND CRACKERS

We sit down to dinner — fried chicken, mashed potatoes, corn on the cob, dinner rolls, a salad, and pecan and pumpkin pies. The Amish generally eat their meals in near silence, but they attempt small talk for guests. I feel Edna and Sarah Ann’s eyes on me as I eat; I gush over the dinner, but they are shy about compliments. I hope they know I appreciate the rarity of this event for “an English.” 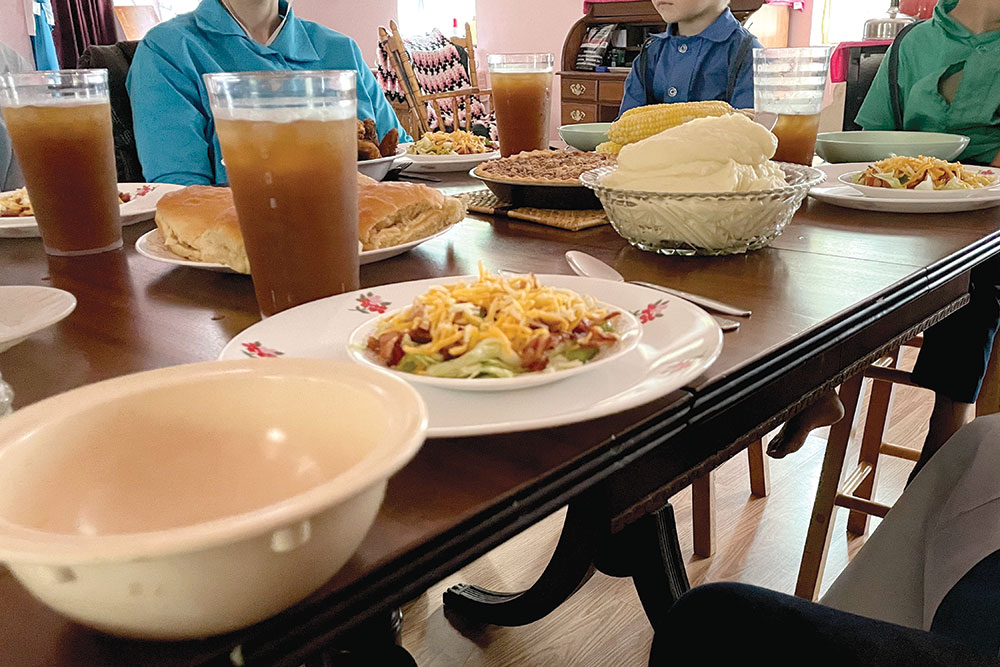 I offer to help wash the dishes, but of course, Sara Ann won’t hear of it. “You’re our friend,” she says.

I shake hands to leave, pet the tiger-striped kittens and envy the beauty of this quiet life.

Make Your Own Amish Pies

Mix as usual for pie dough. Double the recipe for two pies.

Mix together all ingredients except pecans. Pour mixture into pie shell. Sprinkle pecans on top. Bake at 350 degrees for 10 minutes, then reduce heat to 300 and bake until pie is set. Yield: 2 pies.

— from “Cooking with the Rocker Shop Family: Delicious Amish Cooking”