A Rough Landing in Fox Chapel

How Amelia Earhart crash-landed in the 'Burgh. 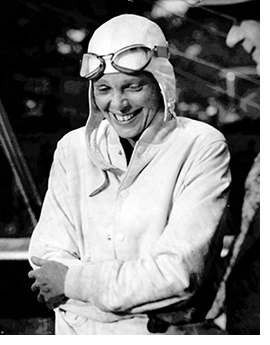 Amelia Earhart flew into Pittsburgh on Aug. 31, 1928, in an Avro-Avian airplane. She was in the early stages of a record-breaking, cross-continental flight; unfortunately, this break in western Pennsylvania wouldn’t prove particularly restful. She landed too quickly at the old Rodgers Field (where Fox Chapel High School now stands) and crashed into a ditch at the end of the runway.

Fortunately, nobody was hurt — but the crash was one of the worst of her young career. While her plane was being repaired, Earhart (along with her passenger and husband, publisher George P. Putnam) had to stay two nights at the Schenley Hotel (now the Pitt Student Union) in Oakland. Local Aero Club members worked through the night to get Earhart back in the air, earning her eternal gratitude. She and Putnam lunched on hot dogs at the Rodgers Field refreshment stand before heading west on Sept. 2.

In 1932, Earhart received an honorary doctorate from her father’s alma mater, Thiel College in Greenville, Pa. Five years later, when her plane disappeared in the Pacific, Thiel College alumni led efforts to preserve her memory. There’s still an Amelia Earhart Drive on the Thiel campus.

This article appears in the September 2012 issue of Pittsburgh Magazine.
Categories: Rick Sebak